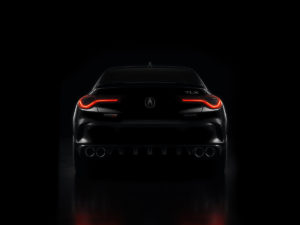 The 2021 Acura TLX will make its official digital debut on Thursday, May 28. Ever since its inception in 2014, the TLX has yet to receive a major makeover, and fans of the brand are ripe with anticipation.

If the teaser photo is any indication, the all-new TLX will appear much sportier than its groundbreaking predecessor. With a tagline that encourages you to “rise above the norm,” the 2021 TLX dons an expressive rear profile, wide stance, low roofline, and quad exhaust outlets.

While designers might have preferred a traditional reveal, Acura has elected to increase excitement with a digital unveiling scheduled for 10:00 a.m. PDT, or 1:00 p.m. EST.

If you want to be sure that you won’t miss out on the big reveal, it’s taking place at https://www.acura.com/future-vehicles/2021-tlx. Be sure to bookmark the link and set a reminder for yourself.

“Delivering dramatic gains in style and performance, the new TLX will be the quickest, best-handling and most well-appointed sport sedan in Acura history, with the Type S being the model’s performance pinnacle,” according to a news release from the luxury automaker.

“The 2021 TLX is the latest step in Acura’s steadfast commitment to bring Precision Crafted Performance to life, as manifested in the second-generation NSX supercar, the third generation RDX, the addition of PMC Edition models produced at the NSX factory, the return of Type S performance variants and a new dedicated 3.0-liter V6 Turbo engine set to debut with the TLX Type S,” according to the news release.

For more information on the 2021 Acura TLX, you can sign up for their newsletter for updates about the all-new luxury sedan on the same website where the reveal is set to take place.

Additionally, you can visit either of the two Ed Napleton Automotive Group Acura locations in Elmhurst, Illinois, and West Palm Beach, Florida to test drive the model when it arrives later this fall.