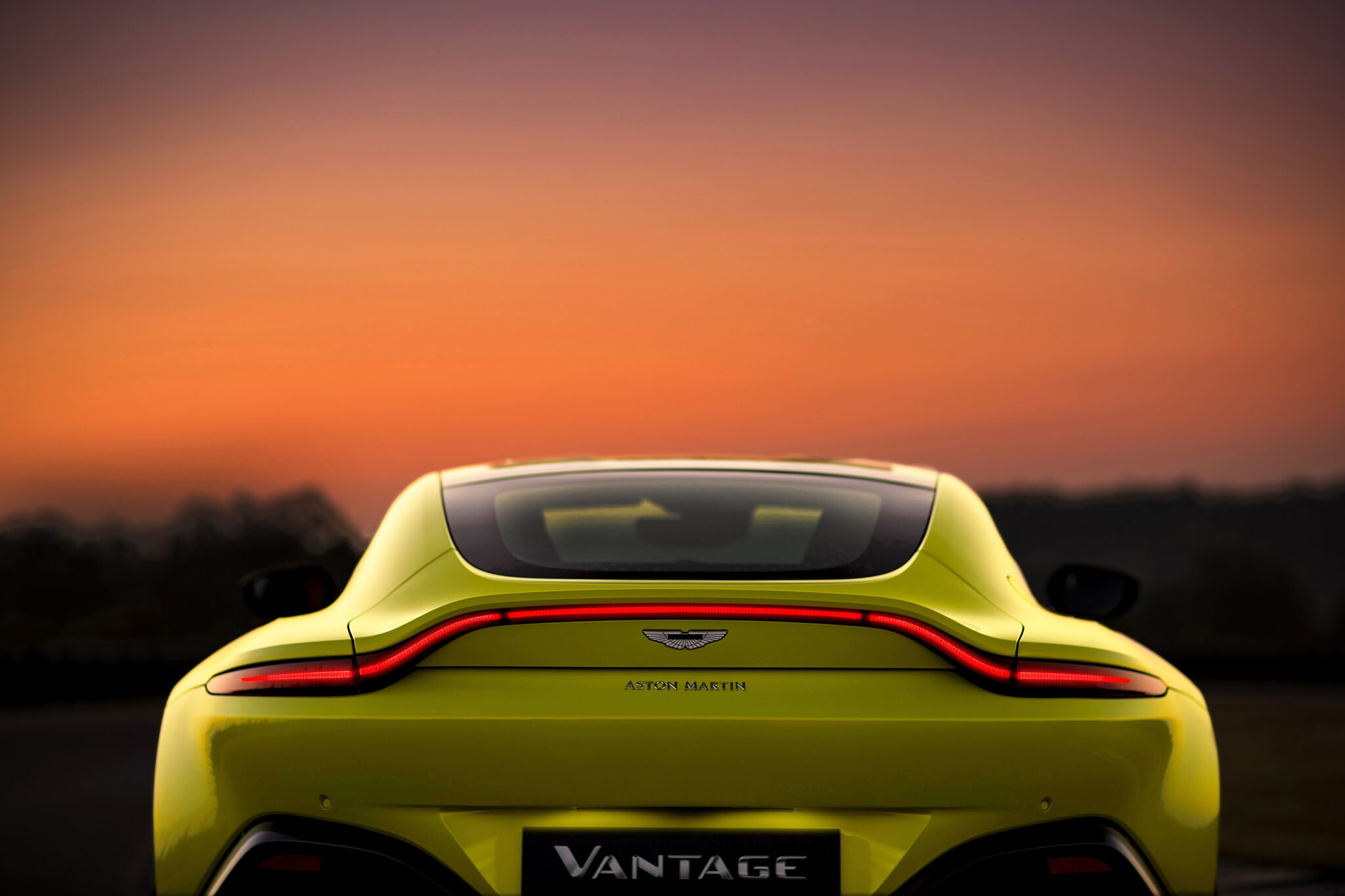 The Aston Martin Vantage is the latest version of the firm’s supercar that had been on the market for the past 11 years. Completely reinvented from the ground up, including a Mercedes-AMG-based powertrain, it can now capably aim directly at its German competition. It’s one of the rarest motorcars on the road today. For example, during an 11-year production run, slightly more than 10,000 copies of the previous model were built. Napleton.news was jazzed to get behind the wheel of this beast. Here’s our report.

WHAT IS THE ASTON MARTIN VANTAGE?

The Aston Martin Vantage is the latest in a long line of specialized grand touring sports/performance cars from the British boutique automaker based in Gaydon, Warwickshire, UK. As it sits, in what we’ll call Safety Yellow Metallic, but Aston calls Lime Essence, it features a majestic look of what it’s like to be ready for action “On Her Majesty’s Secret Service.” All that’s missing is some guy wearing a safety vest and hard hat who happens to be named Bond.

The Vantage is a two-door, two-seater mid-engined sports car that isn’t bashful about utilizing an engine from another brand that also happens to own a small percentage of the Aston Martin company. In this case, we are talking about the 4.0-liter twin-turbocharged V8 that also goes by the AMG Biturbo name. That’s right. At the heart of your Aston Martin beats a thumping V8 engine that also powers the AMG GT and other hot-rods in the Mercedes-AMG stables.

As it resides amidship in the Aston Martin Vantage, this twin-turbo V8 produces 503 horsepower and 505 lb-ft of torque. That’s 80 more horsepower than the old Vantage enjoyed, but can you ever really have too much? This mill is matched to an 8-speed ZF automatic transmission with steering-column-mounted paddle-shift levers and an electronic rear differential that works in line with the stability control system. It varies engine torque to the rear wheels electronically, as needed. Traction and stability control can be completely turned off if necessary.

And after having all that fun by squeezing the go-pedal, it will be time to hit the Carbon Ceramic brakes to bring things back under control.

HOW DOES THE VANTAGE LOOK?

Like a bad boy ready for a track day, the new Aston Martin Vantage displays a wide, race-prepped personage that puts it at the head of the grid. Set the “if-you-can’t-see-it-you-must-be-blind,” yellow color aside for a moment. It is still clear the Vantage was designed with a true intended purpose: To be the rakish, rogue member of the A-M family. With the bulging fenders, gaping black grille, accented black side vents, wide shoulders and blacked-out rear splitter, the Vantage succeeds on all levels, even while standing still, which it doesn’t do for long.

The interior of the Vantage is as dark as a crow in a coal mine. In other words, there is a ton of black, ranging from black Alcantara to black leather to black headliner. Flashes of safety yellow trim make their way onto the doors as well as the center console surrounding the drive selector controls. There’s a theme going on here, don’t you think?

Creature comforts are all in place and offer room for those up to six feet tall. Seat adjustments are located on the center console’s sides, which is off-putting at first but quickly becomes second nature. If the controls around the cabin appear familiar, there’s a reason for this: If you have driven a Mercedes-Benz recently, this Vantage, like several other Aston Martin models, feature parts from the Mercedes parts bin.

Carrying on the pilfering from the M-B parts department are two display screens, which are direct lifts from its patron. They include the instrument gauges and the navigation/climate and audio system on the center console display. Speaking of the audio system, this Aston Martin has optioned the A-M Premium Audio System, responsible for a stellar audio experience that is only surpassed by the sound from the quad tailpipes.

There are cupholders and cubby holes throughout the cabin, including an under-elbow storage bin and pockets on either door. Behind the pair of sport bucket seats is another storage shelf for small items like the owner’s manual. Under the Vantage’s liftback, there is enough space to place approximately five cubic feet of storage in the rear. That’s good for a large suitcase, or if squeezed a large set of golf clubs.

BEHIND THE WHEEL OF THE ASTON MARTIN VANTAGE

The new Aston Martin Vantage feels like the motoring equivalent of a suit from a Savile Row tailor. Sure, it’s a mouthful, but the bottom line is when you get into the Vantage, it just fits, and it fits well. With sport seats that firmly hold you in place thanks to the leather and Alcantara bolsters, you are sure to remain planted as you round a turn substantially faster than you could in a lesser vehicle.

Starting the Vantage requires a push of the central starter button in the lower bout of the console. A light touch is all it takes before the 4.0 liters of turbocharged power growls to life. After settling down to a dulcet gurgle, we are ready to go. Gently squeezing the accelerator causes the Aston to roll away from start, with speed and engine noise climbing simultaneously.

After leaving the speed-choked neighborhood near home, for backroads that are more forgiving and encouraging to those of us who like to stand on it a bit, we do stand on it. Zero to 60 comes in less than 3.5 seconds and before we realize it, we are approaching three digits on the speedo. We correct ourselves and squeeze the grabby carbon-ceramic brakes bringing the Vantage back to a halt.

The thing we realize behind the wheel of the Aston Martin Vantage is that it is so much better than Astons of the past. Chalk that up to their partnership with Mercedes, which helps in power refinement and panache.

In the case of this new Vantage, it stands out in all three ways.