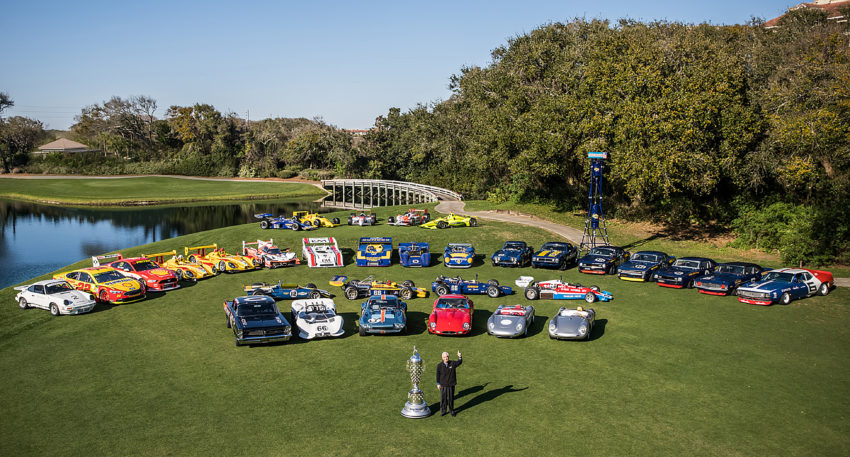 These Best in Show honors were really nothing more than small potatoes, though, when compared to the star power brought by the Concour’s honoree, the Captain, Roger Penske.

Penske, who is a world-renown businessman, also happened to be a famed racer until his retirement in 1965. Since then, he has become one of the winningest racing team owners in motorsports history.

The “Best in Show” Concours d’Elegance trophy went to a 1929 Duesenberg J-218 Limousine owned by the Lehrman Collection, Palm Beach, Florida. Originally commissioned by “Captain” George Whittell, Jr., a larger than life member of San Francisco society, the Duesie was a Murphy-bodied Town Limousine with an aluminum roof.

Whittell was quite the bon vivant, notorious for escapades with women, street racing, and outrageous public appearances. The ultimate playboy, he was also apparently a clairvoyant, having the foresight to liquidate his entire stock portfolio (worth approximately $50 million at the time) two weeks before the great stock market crash of 1929.

A 1973 Porsche 917/30 owned by collector Rob Kauffman of Charlotte, North Carolina, was once described by the late motorsport champion and Penske driver, Mark Donohue, as “the perfect race car.” He would know because it propelled him to six victories in eight races and ultimately to the 1973 Can-Am Championship.

Fifty years later, it is still considered the most powerful circuit racing car ever made. Its full potential has never been recorded, although fifty years after setting it, the Penske Sunoco Special 917/30 remains, at 221.16 mph, the holder of the fastest lap at Talladega Superspeedway in Talladega, Alabama.

Roger Penske and his Race Cars

International businessman and race team owner, Roger Penske hung up his driving suit in 1965. But he has never slowed down. Penske has watched as 18 of his cars and drivers have taken the title of Indy 500 winner. Other teams under the Team Penske umbrella have found greatness in NASCAR, The Can-Am series, Formula 1, Trans-Am, Australian Supercars, and The American Le Mans Series. In celebration of his honoree status at the 2020 Amelia Island Concours, a special class of Penske Race Cars was created, featuring 30 racers campaigned through the years by Team Penske.

The Captain continues to show no apparent signs of slowing down. We at Napleton.News offer congratulations on a career that just seems to be getting started.