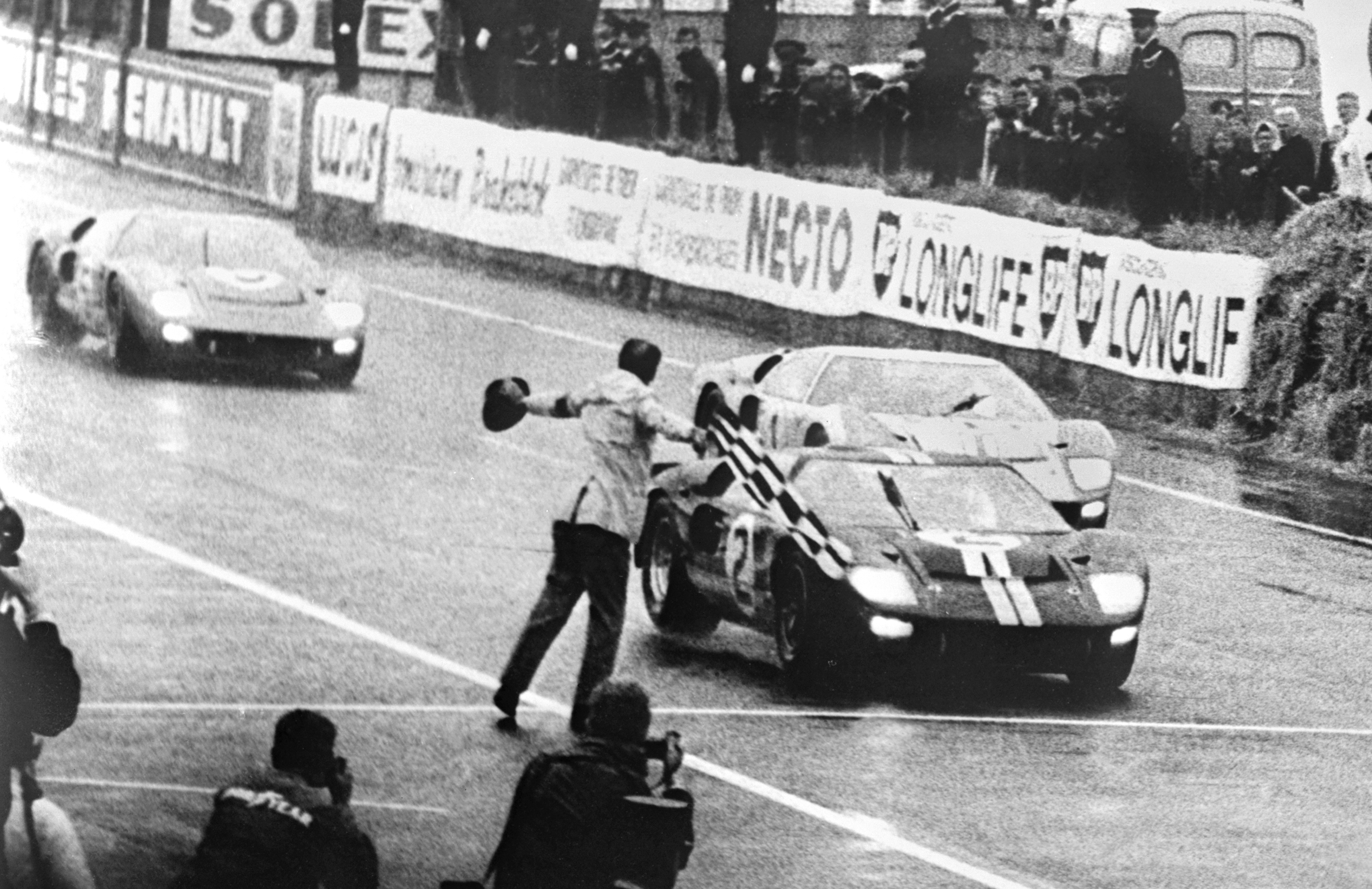 Car Movies have come a long way from road trip flicks featuring a rickety truck during the Dust Bowl era. The chances are that you love cars as much as we do, otherwise you might not be reading this story.  Here’s a look at a few of our new and old favorites.

The latest of the car movies to hit the silver screen is Ford vs. Ferrari, starring Matt Damon and Christian Bale. It’s one of those “based on a true story” treatments of a famous race in the Summer of 1966. As it goes, Enzo Ferrari sought a buyout offer from Ford Motor Company to purchase his namesake brand.

To hear one version of the story, Il Commendatore, Ferrari, the man, had no intention of selling Ferrari the company to the American automaker. Instead, Ferrari was using Ford’s offer to drive up an opposing offer from Fiat. Besides, he would never sell to “an ugly company that builds ugly cars in an ugly factory.”

Henry Ford II (Hank the Deuce) was so angry that he vowed to bury Ferrari at its own game, commissioning the Ford GT to beat the Ferrari sports cars at Le Mans. It took three tries, but with the guidance of Carroll Shelby and Ken Miles, the team refocused the Ford factory efforts to help accomplish a 1-2-3 finish at the 1966 race.

“Rush” is a look at the professional rivalry and friendship of legendary Formula 1 drivers, Niki Lauda and James Hunt. Directed by Ron Howard, it places us in the middle of the sport during the 1970s. At that time, the likelihood of death and destruction during a race was a real possibility. The action was realistic, even though look-alike Ferrari and McLaren Formula 1 replicas were used during filming. That’s a good thing since most of the actual cars are multi-million dollar vehicles today.

Rush stars Chris Hemsworth as Hunt, the hedonist and Daniel Brühl as Lauda, the analytical, fighting for driver safety reforms. This was in an era which transformed the sport from a collective of “Gentlemen Racers” to the world-wide sport that Formula 1 has become today.

Rush is the perfect introduction for people who don’t think they like car movies, or those who think Formula 1 was the original recipe for Coca Cola.

Le Mans, starring Steve McQueen, is a film that details the tension, strategy and elation that comes each year during a single 24-hour period of the World’s toughest endurance race, which happens to occur in the French countryside. The movie is exceptionally light on meaningful dialog but did set a standard for camera work in car movies. High-speed camera cars including a highly modified Ford GT with cameras mounted in the car’s front and rear, helped place the viewer feet away from iconic 200 mph John Wyer Gulf Porsche 917s and Ferrari 512 LM sports cars.

While McQueen is prone to grunts and other utterances throughout the film, the action is unmistakable, featuring 8.5 miles of French roads, two trips around the clock with night-driving, rain, and other elements. It was the car movie that introduced us to the iconic light blue and orange Gulf Oil Racing color scheme.

The movie “Cars” is a flick that is big on action for both the young and those who wish they still were. Heading to California for the Big Race against “The King,” Lightning McQueen becomes lost in the town of Radiator Springs after falling out of his race car hauler. While there, he meets and befriends the locals, and along the way, discovers the true meaning of friendship and family.

Like NASCAR for beginners, Days of Thunder is a wrestling-on-wheels look at the wild and wooly world of Southern Style stock car racing. One of Tom Cruise’s early star turns, it included his future ex-wife, Nicole Kidman. Another unknown named John C. Reilly, went on to star in Talladega Nights, The Ballad of Ricky Bobby, which was written to spoof Days of Thunder. With its North Carolina roots, and its good ole boy, backwoods cheater mentality (“I’m gonna give you a fuel line that’ll hold an extra gallon of gas, and I’m gonna shave half an inch offa ya, and shape you like a bullet,” said crew chief Harry Hogge (Robert Duvall), it comes off more like Days of Blunder instead. Still, it was fun to see Chevrolet Lumina stock cars running circles around famous tracks like Daytona International Speedway and Phoenix International Raceway.

This was one of the first car movies responsible for many memorable lines (“Rubbing is racing”) and the never-forgettable “Hit the Pace Car.” “What for,” asks Cruise. Hogge (Duvall) responds with the classic, “You’ve hit just about every other $%#&*?@ thing out there, I want you to be perfect.” It also started the miniature NASCAR diecast car craze that helped sell many a Matchbox and Hotwheels car.

The Fast and the Furious

The original of the Fast and the Furious car movies, it introduced us to Vin Diesel (Dominic Toretto “I live my life a quarter-mile at a time.”), Michelle Rodriquez (Letty Ortiz), Paul Walker (Ofc. Brian O’Conner) and Tyrese Gibson (Roman Pearce). It also gave us the idea to put fart-can mufflers and a slammed suspension on our Mom’s old Honda Civic sedan. So what if the power only comes on once you hit 5,500 rpm?

Generally, most people mention the Fast and Furious title, regardless of which sequel they are referring to.  All were legitimately fun films that taught us to think beyond a big, supercharged Dodge Charger and the domestically-offered import vehicles. Instead, the movies introduced us to the idea of Japanese Domestic Market (JDM) vehicles, including the Nissan Skyline GT-R, a Mitsubishi Evo Lancer, and the Toyota Supra MK IV.

Part of a Quentin Tarantino and Robert Rodriguez double-feature called “Grindhouse,” Death Proof was the second of the two features (including the “Let’s all go to the lobby” intermission jingle) that featured Kurt Russell as psychotic “Stuntman Mike.” Frankly, it’s the first slasher movie where the weapons turn out to be the cars. In this case, we’re talking about a Dodge Charger and a matte black 1970 Chevrolet Nova with a Plexiglas-caged camera pod, and a fully enclosed driver’s compartment. The thing is, the Nova is death-proof on the side of the driver’s compartment. Those in the camera pod side, not so much.

As is typical with a Tarantino film, it is disjointed and jumps around like a flea in a dog kennel. But one of those jumps introduces us to an Australian stunt artist and actress named Zoe Bell. No spoilers here, but watch Death Proof all the way through, to the ending. There’s a big payoff, involving an original Dodge Challenger, for which you will thank us later.

“If you ain’t first, you’re last.” And with that, Ricky Bobby grows up with Daddy issues. Except Ricky Bobby is a driver in “Talladega Nights, The Ballad of Ricky Bobby,” a corn-pone spoof of the NASCAR lifestyle. In fact, NASCAR gave their blessing and permission to film at some of their tracks to make the film and poke fun at the fans, the sponsorship and the lifestyle.

There were quite a few vehicles in the movie, including a fleet of Chevrolets ranging from a 1980 Caprice Custom Classic, a 1969 Chevy Malibu, a Corvette C5, and a 2004 Chevrolet Monte Carlo NASCAR.

The result was a resounding success that some say was more realistic than the stereotypes that were perpetrated in Days of Thunder. It’s always a good thing to poke fun at yourself, we say, and with Will Ferrell, John C. Reilly and Sacha Baron Cohen as chief pokers, how can you go wrong?

With a great selection of cars, an intriguing plot (work to be free) and a stylish soundtrack, “Baby Driver” is a 4,800 rpm, 1 hour, 53-minute thrill ride that has you holding on to the arms of your chair as
“Baby” whips wheel while driving for a thieving mastermind named Doc. While a Subaru WRX is the star, other cars include a Ram 1500 pickup, a 1989 Caprice Custom Classic, a 1979 Lincoln Continental Mark V, and a Chevrolet Blazer.

Providing an easy in and out for his bank-robbing cronies gets him in quite a few tight jams. Does he get out ok? Does he get the girl? Does he wreck his bright red STi? Does his fantastic iPod playlist survive? You’ll have to buckle in to find out for yourself.

As more car movies are introduced, we’ll be sure to review them here at Napleton.news. We can even get your favorite car as seen in one of these films. Contact us at Ed Napleton Auto Group for more information.

Now would you please pass the popcorn?