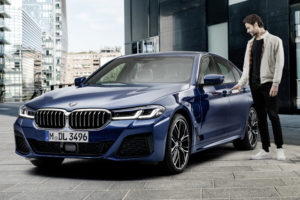 BMW announced they would become the first automaker with a Digital Key for iPhone, enabling its customers to use the famous phone with their BMW vehicles, today at the Apple Worldwide Developer Conference (WWDC) in Cupertino, California.

Napleton.news has always been Mac-centric, so we are excited, jazzed even, to see this new development, especially as it pertains to BMW vehicles. The announcement continues a long history the automaker has had with Apple.

According to BMW’s global press office, they were the first to introduce iPod integration into their vehicles. They were also the first to offer wireless CarPlay and now the first to implement support for BMW Digital Key, which will be securely stored in the Apple Wallet for iPhone.

The new BMW Digital Key for iPhone will allow customers to tap their screen and then place the device in the smartphone tray enabling the unlocking of the starter button. A user will setup the “iPhone as Digital Key” function through the use of the BMW Smartphone App. From there, the owner can share access with up to five friends, but why share, we ask? As an added bonus, owners can choose to offer access for young drivers in the household through the use of a configurable car access option, which restricts top speed, horsepower and even maximum radio volume. Access can be modified and even restricted through the use of the Apple Wallet or by proximity to the car’s interior.

In addition to the obvious features, they have included a few new ones:

BMW IS NO “JOHNNY COME LATELY”

BMW is no recent convert to the concept of using smartphones as digital keys. Their only requirement was that the implementation is done right. Apple and BMW have been collaborating closely with the Car Connectivity Consortium (CCC) to press ahead with the establishment of global standards designed to provide security for its users.

The BMW Digital Key for iPhone will be available on BMW vehicles in 45 countries. They include the BMW 1, 2, 3, 4, 5, 6, 8 and Z4 cars and X5, X6, X7, X5M and X6M Sport Activity Vehicles (SAV). The Digital Key app is compatible with iPhones ranging from the iPhone XR, iPhone XS or newer and Apple Watch Series 5 and newer.

Just as Steve Jobs used to say when he was running Apple, there was one more thing at the WWDC. BMW and Apple also announced a new feature that allows CarPlay users to take BMW electric vehicles on longer journeys by automatically taking into account when and where to charge up their vehicles. Drivers can plan their trips using their iPhone or through CarPlay when they enter the vehicle. From there, Apple Maps will pick the optimal route based on electric range and charging location along the way. The system will first appear in the upcoming BMW i4, which will launch next year.

In the meantime, more information is available with the BMW experts at Napleton’s BMW of Wyoming Valley.

One thought on “BMW DIGITAL KEY FOR iPHONE”