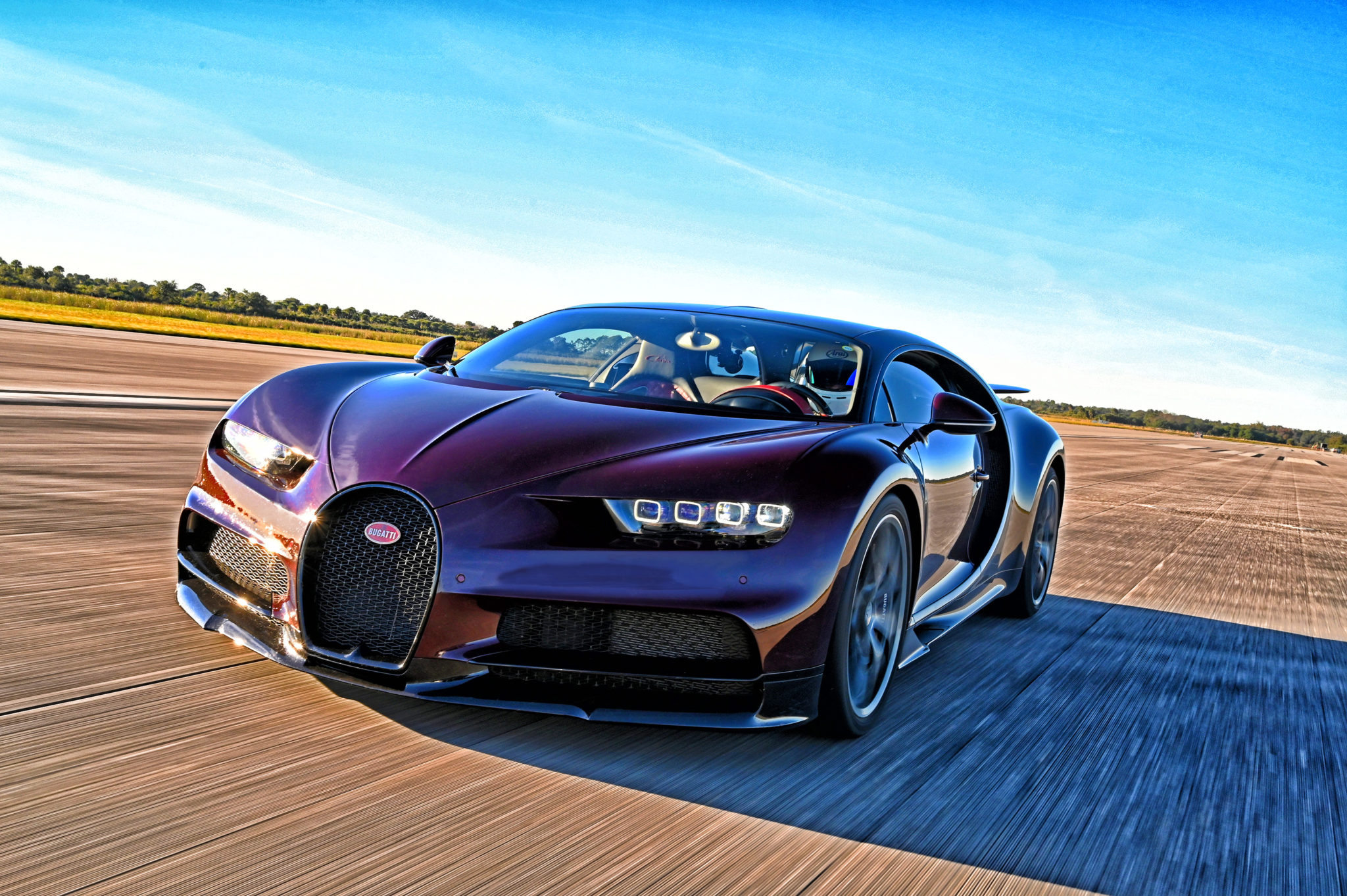 We are at NASA’s Kennedy Space Center in Florida, at the Johnny Bohmer Proving Grounds, to witness Volkswagen Group test pilots drive, er, fly a Bugatti Chiron model as it blasts off from one end of the Shuttle Landing runway facility on a gorgeous sunny day in Florida’s Space Coast region.

Designed in Wolfsburg, Germany and built in Molsheim, France, the Chiron was introduced at the Geneva Motor Show in 2016. Its production will be limited to 500 copies. It is named for former Monaco-based race driver, Louis Chiron.

Bugatti, the brand, was named for its founder, Ettore Bugatti, who designed and manufactured the Type 35 race car and Type 41 “Royale,” Type 57 “Atlantic,” and the Type 55 sports car. His death in 1947 meant the death of the Brand, since there was no successor to lead the factory at that time. In the 1990s, an Italian man bought the name, eventually selling it to Volkswagen Group, who now manufacturers the Chiron in their French factory.

The Bugatti Chiron is a hand-built supercar powered by a W16 quad-turbocharged (that’s four of them) engine producing 1,500-horsepower and 1,180 lb-ft of torque between 2,000-6,000 RPM. 0-60 comes on in 2.4 seconds, while 124 mph appears in 6.5 seconds. Those stratospheric speeds are not nearly as heady as the top speed of 261 mph, which is speed-limited by current tire technologies. Oh, and then there is the $3.1-million price tag. Talk about sticker shock, but honestly if you have to ask….

The Johnny Bohmer Automotive proving grounds at Kennedy Space Center incorporates the Space Shuttle Landing facility that was in place as an emergency landing runway after liftoff, and for normal landings at the end of a mission. Even though the last one, Mission STS 135, flew on July 21, 2011, it is still an active runway. In addition to normal air traffic, the runway also serves as a test facility for hire, used by thrill-seekers, auto clubs and auto manufacturers alike.

This particularly chilly day morning found us arriving shortly after sunrise in mid-fifties degree temperatures, the same morning as SpaceX was about to launch their Falcon 9 Rocket from a nearby Cape Canaveral launch pad. Nearby is a relative term since the pad is actually about five miles away. We were eager to get there in time to line up a photo with the Bugatti in the foreground, a Space Shuttle trainer in the background and the SpaceX Falcon 9 launching in the distance, all lined up for that perfect “money shot.”

We were also eager to get in place early to avoid traffic jams associated with the arrival of Vice President Mike Pence who was there to witness the scheduled launch.

After presenting two forms of photo ID, we are documented, photographed and badged at the KSC Security Office, which resembles a DMV waiting area complete with emergency room-style waiting chairs and a “Take a Number” ticket dispenser. Once this is accomplished we are caravanned over to the Landing Facility, where Bugatti technicians are scurrying about, removing a curving cabernet-hued carbon fiber-draped supercar from an aircraft container that was likely spit out from a Boeing 747 just a few days before.

Checking the fluids, topping off the fuel, warming up everything and re-torquing the tires were all that was left to do before the team ushered the Chiron over to the runway. Bugatti test drivers donned flame retardant suits, gloves, boots and helmets along with HANS devices (Head and Neck Support) before prepping for a few shakedown runs. Cockpit cameras are activated and finally a driver squeezes in and buckles up for several blasts up and down the runway.

The KSC runway is nearly three miles long, from one end to the other. That’s such a long distance that a person standing at one end of the runway could not see a person standing on the other end because of the curvature of the earth. After each driver has finished his stint behind the wheel, he could have easily gone 30 or 40 miles in just ten minutes. Following each run, fuel is once again topped off, and tires are changed, but probably not for the reason you would expect. There’s still plenty of life left on them, but after extended high speed runs north of 200 miles per hour, they need to cool because they are not constructed to withstand the heat that comes from extended periods at extremely high speed. That’s why the Bugatti Chiron is electronically limited to 261 mph!

The sound from the W16 Quad turbocharged 8-liter engine is a symphony of roughness and velvety smoothness all at the same time. Getting underway, one notices the 8.0-liter mill start to bog downward before it starts to climb in pitch, spitting and coughing until it is well underway. Heading to the south end of the runway, it disappears beyond a mile. It is only until the car is turned around and starts heading north that we notice the daylight running lights which pinpoint the Chiron’s exact location. Finally, we notice it darting a tiny bit left and right but it is a noiseless proposition since the sound is being made around a mile and a half away from us.

Eventually sound starts to reach the runway’s midpoint and continues to soar from there. The roar climbs as the Chiron approaches at full pitch, to the point the roar turns to a growl and the nearby ground is shaking. That is, until it passes. Then a strange phenomenon occurs: As the car passes, that growl turns to a giant whoosh sound effect which is the noise the wind gives as it sweeps and rolls over the surface of the vehicle. Think of it in terms of a helicopter: you hear the flip, flip, flip, of a helicopter’s rotors as it approaches, but the noise changes drastically as it passes, to a softer, more gently rotating sound as it disappears into the distance. Actually, forget the helicopter analogy. It’s more like the whoosh made by a fighter jet.

Speaking of fighter jets, Ex-Navy fighter pilot and retired NASA Astronaut Jon McBride was on hand to witness and participate in the test drive. When asked if he had ever gone this fast before, he replied “don’t forget, my Space Shuttle was cruising through space at nearly 18,000 mph.” Umm, talk about ending the conversation rather quickly.

And then the ride was nearly over. Clear at the other end of the runway, the rear spoiler that was used to provide downforce over the four wheels and their Haldex all-wheel-drive system shoots up into an airbrake mode that provides maximum drag in an effort to slow the car down again.

And that’s exactly what the Bugatti Chiron does. It can go from 0-261 miles per hour and back down to zero again. All with a minimal amount of maintenance and tire care.

That’s the pure definition of a super car.