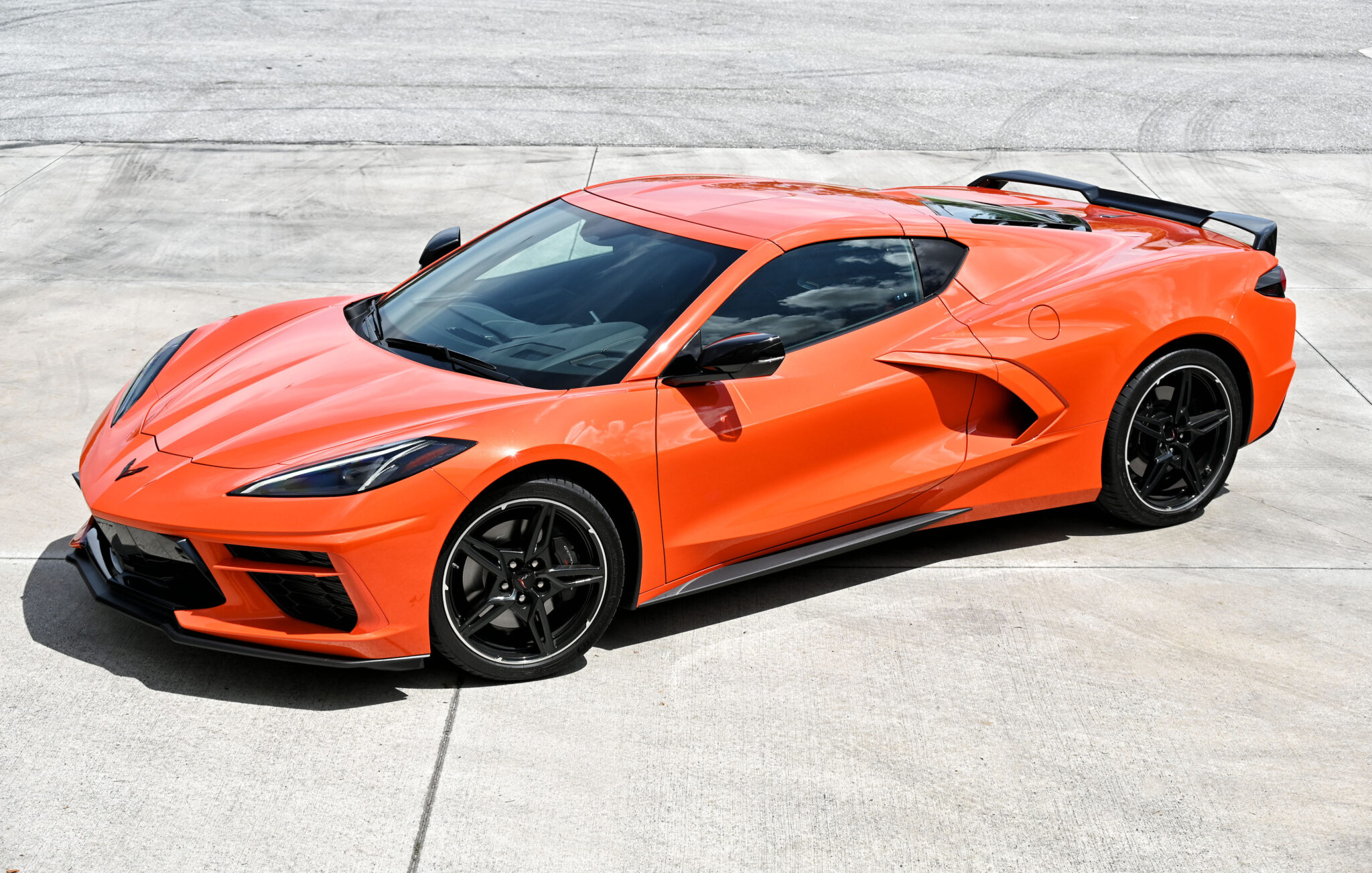 The 2020 Corvette Stingray Mid-Engine Coupe is the first NEW look at America’s one true sports car since the model was introduced in 1953. For more than 60-years, Chevrolet has managed to wring out every bit of technology and performance possible from the previous generations of front-engine, rear-wheel-drive sports cars. There have been seven-generations of front engine / rear drivers along the way, but after a while, there’s no getting around it. You can refine, supercharge, improve traction control, beef up the suspension or transmission. There’s only so much that can be done. After hitting that wall, Chevrolet thought it was the perfect time for a change.

The result is breathtaking.

FROM CONCEPT(S) TO REALITY

The 2020 Chevrolet Corvette Stingray Mid-Engine Coupe is the first production Corvette two-seater to place its motor behind the driver and passenger, yet ahead of the rear axle. That’s quite a change from a car that has been front-engine, rear-wheel drive and with a fiberglass body from its inception.

Sure, there have been rear-engine concept cars before. These have gone back as far as 1960 with the Chevrolet Engineering Research Vehicle (CERV 1), which was followed by the XP-882 Mid-Engine Prototype in 1970. There were others, powered by Wankel Rotary engines, bodied in aluminum, and even stuffed with a “for racing only: L88 engine that boasted of 430 horsepower on paper but provided closer to 500 horsepower and 500 lb-ft of torque on the track.

Technology and experience were gained with each concept vehicle. Each step and even the occasional missteps helped to refine the 2020 Chevrolet Corvette Stingray Mid-Engine Coupe that you see today.

Officially, the new Chevrolet Corvette Stingray Mid-Engine Coupe is a two-passenger, mid-engine, rear-drive sports car. It’s powered by a 6.2-liter small-block LT-2 V8 engine that produces 490 horsepower and 470 lb-ft of torque in the anything-but-base model. Ours was equipped with the Z51 performance package that boosted the sticker an additional $5,000. Is this package worth it? You be the judge.

The Z51 package includes performance brakes, suspension, exhaust, rear axle ratio, an electronic limited-slip differential and a Z51 rear spoiler. The added Z51 kit gives a boost to the overall horsepower to 495 horsepower and a 0-60 mph time in under three seconds. Top speed checks in at 194 miles per hour.

For the first time, you won’t find a manual transmission in the new C8 Corvettes. Yeah, yeah, we’ve all heard the throngs yelling “save the manuals,” but the fact is most buyers didn’t buy them when they were offered. Then our dad voices would say, “This is why we can’t have nice things.” But wait, you can! The Stingray’s eight-speed dual-clutch transmission is a better performing gearbox that is more than capable of putting nearly 500 horsepower to the pavement. And if you still feel the urge to row it yourself, you can throw it into manual mode to channel your favorite road-racing pilot with the steering wheel-mounted paddle shift levers.

HOW DOES THE NEW CORVETTE STINGRAY COUPE LOOK?

If you haven’t seen the new C8 Corvette Stingray at any time over the past two years, chances are you have been living in a cave. On a deserted island. In the middle of the Pacific Ocean. Regardless, it is one of the most stunning new vehicles to be seen on the streets anywhere.

Starting with a very swoopy aerodynamic shape, the new Stingray possesses many of the styling cues seen in other Corvettes through the years. But this time, it features major aero-scoopage in all the right places. There’s a strong rear, with side intakes that begin at the trailing edge of the doors to the rear fenders.

The best part of the Corvette Stingray’s looks is that buyers will think it’s twice as expensive as it really is.

WHAT ABOUT INSIDE NEW CORVETTE?

Let’s be honest. The new Corvette Stingray Mid-Engine Coupe is a driver’s car through and through. That’s why the driver sees such a wide array of controls surrounding the GT2 adjustable sport seats that are only waiting for racing harnesses to be installed. Driver-centric is the name of the game here, from the square racing-style steering wheel to the center “spine” that helps to divide the business-side of the cockpit from the passenger side.

On this spine are controls for everything from climate control to seat heating and ventilation to radio controls. To the left of that is the drive select buttons for Park, Neutral, Drive, Manual and Reverse modes. A drive mode selector is just next to that, offering a change of settings from normal to sport, sport+, touring, track and more.

Just below the “spine,” drivers will find a small compartment that opens toward the driver, that’s good enough for a set of glasses or a smartphone. Speaking of smartphones, there’s a Qi charging pad just behind that to replenish your phone battery as needed.

HOW DOES THE CHEVY CORVETTE STINGRAY DRIVE?

It’s a full second faster than its older sibling and capable of hitting nearly 200 miles per hour thanks to its naturally-aspirated small-block V8 engine. Throttle response is immediate because there’s no turbo-lag or supercharger spin-up to deal with. Just stomp the throttle and go. We had a chance to hear the normal Corvette exhaust system that comes standard with this Stingray. The sound is sweet, but the Z51’s performance exhaust system is sweeter still.

Typically with performance vehicles, the ride is harsh and bone-rattling. The new Corvette Stingray Mid-Engine Coupe is nothing of the sort. Thanks to its ride control, drivers can set the car for Sport, Sport+ or Touring, which is just the ticket for a relaxing, yet exhilarating ride and performance. For those who crave a dose of tech with their performance, there is the available magnetic ride control, which for the additional $1,895, manages to read the road hundreds of times per second and magnetically adjusts ride comfort accordingly. So good is the General Motors-designed system that it even manages to find its way into several Ferrari sports car models.

By throwing everything in the trunk, so to speak, Chevrolet has managed to extend the possibilities and the popularity of the Corvette to an entirely new generation of buyers.