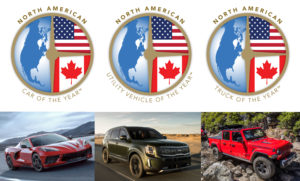 After hundreds of hours driving dozens of new vehicles, jurors have named the Corvette, Telluride and Gladiator as the 2020 NACTOY winners for Car, Utility and Truck Of The Year, respectively.

Known formally as the North American Car, Utility and Truck Of The Year awards, the winners are selected by a group of fifty automotive journalists representing print, broadcast and online outlets. The 2020 NACTOY winners highlight what the experts think are the best on offer from automakers worldwide. Their selections are based on the vehicle’s segment leadership (where they position themselves within their category), innovation, design, safety, handling, driver satisfaction and value for the dollar. Here at Napleton.news, we know many of these experts and can agree with their decisions.

“These awards would not be possible without the hard work, professionalism and insight of all our jurors and the cooperation …. from all the auto manufacturers,” said NACTOY President Lauren Fix. “We are proud that both automakers and consumers recognize the value our awards provide to new car buyers.”

The 2020 Chevrolet Corvette Stingray has been selected, according to a Chevrolet press release, as the car of the year for its “revolutionary mid-engine design, and level of refinement and impressive performance.

The mid-engine Stingray marks a new era for the iconic brand, with an overwhelming response from the public and journalists. Production starts in February 2020, with customers receiving their new vehicles shortly after that.

The Kia Telluride was named the 2020 North American Utility Vehicle of the Year by the fifty-member NACTOY Jury. It’s a “First-Time Honor” for the Kia brand and follows a year of awards from significant consumer and enthusiast publications both within and outside the automotive segment.

The three-row Telluride was subjected to test drives, comparisons and other evaluations. It must be all-new or substantially new and available for sale at dealerships around the time of the awards, which are given every January in Detroit. “The Telluride makes owning an SUV look cool while offering the smooth ride and rich interior of a luxury vehicle without the luxury price,” said Kirk Bell, NACTOY secretary-treasurer.

The 2020 Telluride is one of Kia Motors America’s best-selling vehicles, with over 60,000 currently sold nationwide. Demand continues to outpace supply for the vehicle, which was conceived, designed and constructed in West Point, Georgia. It is also the first Kia vehicle to be built and exported from the United States.

The Jeep Gladiator, FCA’s most capable mid-size truck ever, was named 2020 North American Truck of the Year by the NACTOY jurors. The award is unique and considered to be one of the most prestigious based on the diversity of its jurors who cover the automotive industry for Magazines, Newspapers, Broadcast outlets, Online outlets and more.

The Jeep Gladiator was engineered from the ground up to be the most off-road capable mid-size truck, building on a rich heritage of robust dependability that is uniquely Jeep to its core. There is the authentic Jeep design, open-air freedom, clever functionality and 4×4 off-road ability that Jeep owners expect. All Jeep Gladiators wear Trail-Rated badging to indicate they are designed for a wide variety of challenging conditions.

All three of these NACTOY award-winning vehicles are available at Napleton Auto Group dealerships nationwide. Be sure to contact the dealership near you for more information.