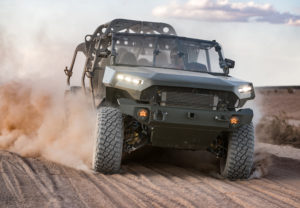 The Chevrolet Colorado will be the basis of the new US Army Infantry Squad Vehicle (ISV), as announced by GM Defense LLC.  A contract to “build, field and sustain” the Army’s new Infantry Squad Vehicle (ISV) was awarded to “the General” based on their ability to design and execute final production of the vehicle. This contract will be part of an initial order of 649 vehicles for the Army, with an approved Army Acquisition Objective of 2065 vehicles.

A subsidiary of General Motors, GM Defense designs and builds integrated vehicles, as well as power and mobility solutions for global defense, security and government market customers. GM Defense will receive $214.3 million for the initial contract of vehicles.

BASED ON CHEVROLET COLORADO

The new US Army Infantry Squad Vehicle (ISV) receives its “good bones” from the Chevrolet Colorado midsized pickup truck architecture. Following drivetime in the Colorado, Napleton News can attest to those bones. As such, it uses approximately 90-percent “off-the-shelf” parts that are already available today and require no special design to put them up to military specifications. These parts include Multimatic dual spool-valve dampers and Chevrolet Performance suspension components.

The ISV is light enough to be slung underneath a Blackhawk Helicopter and compact enough to fit within a Chinook helicopter.

According to General Motors, the components have already undergone validation through their participation in the grueling “Best in the Desert racing series, where racing Chevy Colorado vehicles are one of only four vehicles to complete 11 consecutive races out of a total of 434 competitors.

GM has championed its ability to deliver an ISV with world-class manufacturing efficiencies that are easy to maintain and has an existing global supply chain. All vehicles will include an occupant and cargo superstructure powered by a 186 horsepower 2.8-liter Duramax turbo-diesel engine and six-speed automatic transmission.

“Winning this Army award is well-deserved recognition for the hard work and dedication of our GM Defense Team and their production of a fantastic vehicle,” said David Albritton, president of GM Defense. “It’s indeed an honor…to design, build and deliver the best technologies available to to the men and women of the US Armed Forces and our allies.

Although it is not likely you will ever need a vehicle like the GM Defense Infantry Squad Vehicle, you can have the vehicle that serves as the backbone of the Army’s latest weapon. Stop by Napleton’s Chevrolet of Wayzata to see the Chevrolet Colorado in person. Arrange for a test drive today!