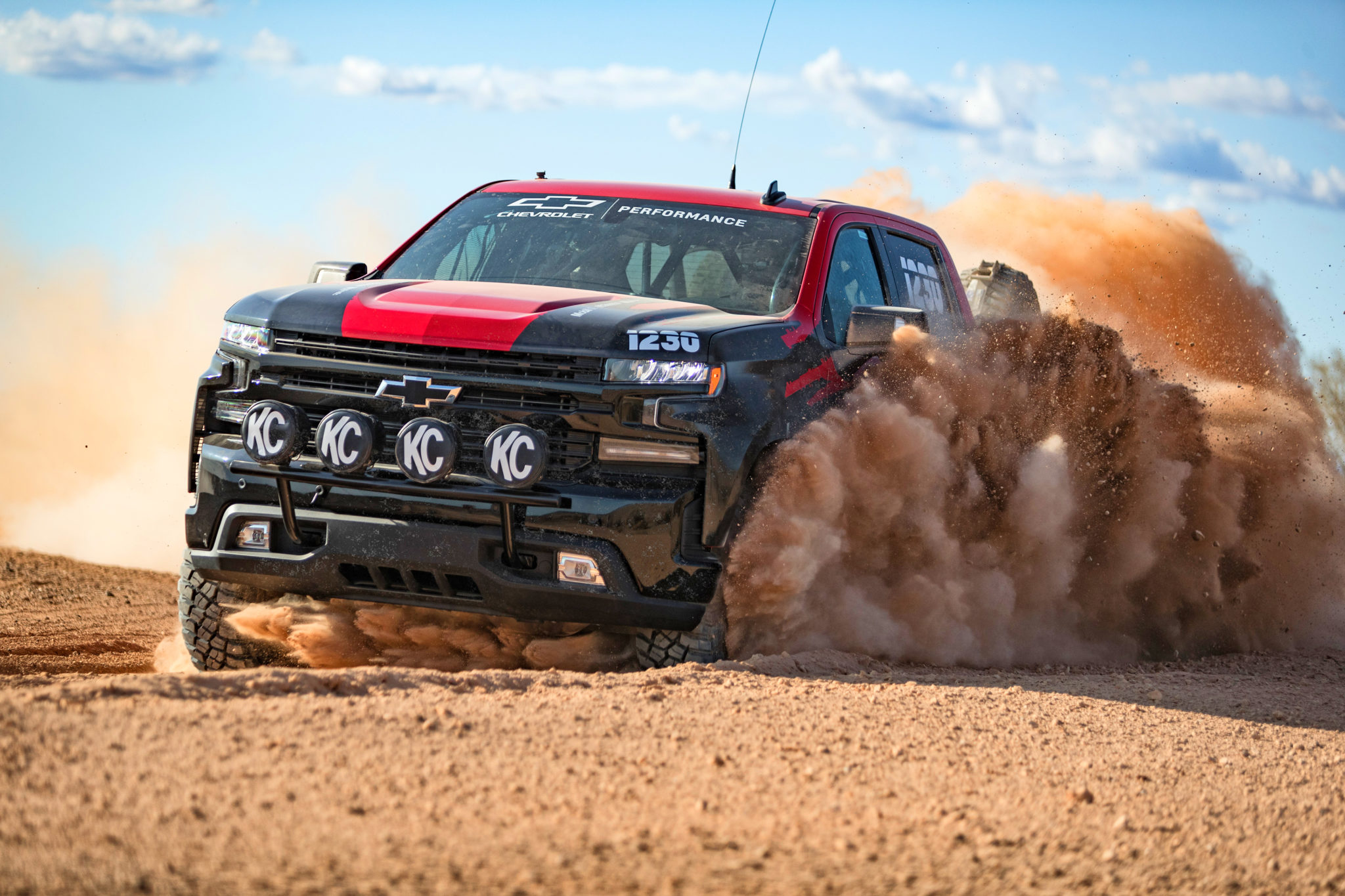 General Motors announced the Chevrolet Silverado would compete in the upcoming “Best of the Desert Racing series in October. Following a successful Chevrolet Colorado ZR2 off-road campaign, Chevy said it would use the series for future development. Consider it a form of high-stress product testing.

“Off-road racing is just brutal on vehicles,” said Mark Dickens, of GM’s  Performance and Motorsports division. “A single race puts more wear and tear on trucks than most will experience in years,” said Dickens.

As a result, off-road racing has become a valuable tool to test new ideas and components. “What we learn while racing validates future performance parts and accessories,” said Dickens.

Chevrolet Performance first tried this approach with the Colorado ZR2 during the 2017 Off-Road racing season. As campaigned by Hall Racing, the Colorado ZR2 had an envious finish record over most of its competition.

The team developed race parts now available through Chevrolet Performance. So reliable, the GM Defense Division chose them for its Infantry Squad Vehicle that is undergoing testing with the U.S. Army.

FROM STREET TO TRACK

The Chevrolet Silverado race truck started as a LT Trail Boss model with a 420 horsepower 6.2-liter V8 engine and 10-speed automatic transmission. Competing in the “Best in the Desert” Stock Class, competitors modify the suspension and underbody.  They also install race-safety equipment such as roll cages, fire extinguishers and harnesses.

Some of the Trail Boss upgrades include the addition of long-travel suspension parts, as well as front and rear shocks.

A set of Multimatic Engineering Dynamic Suspension dampers are also on board. They offer impressive levels of control and compliance, and are now part of the Silverado race truck.

“This is the next evolution of the Dynamic Suspension damper,” said Michael Guttilla, of Multimatic Engineering. “We’ve taken everything from the Colorado ZR2 program and scaled it to deliver next-level performance in the Silverado.

Initial on-truck development has been successful, but competition will provide a true test.” Incidentally, Multimatic is the builder and co-developer of the Ford GT40 endurance race car as well as the street car.

A SENSE OF PRIDE

“I’m incredibly proud of what the team has accomplished with the previous race truck. Now, I’m excited to see what the Silverado is capable of,” said Chad Hall of Hall Racing. “With Colorado ZR2, we cut four hours off our race time from our first Vegas to Reno race to our second. When you marry that suspension design and expertise, with the Silverado’s 420-hp V-8 and even greater suspension travel, I believe this new race truck will be a beast on the racecourse.”

The Silverado will be joined in the Laughlin Desert Classic by Hall Racing’s Colorado ZR2, driven by Frank D’Angelo. Chevrolet will participate in the Mint 400 and six “Best in the Desert” races next year with both Silverado and ZR2.

The Silverado LT Trail Boss and the entire Silverado lineup is available at Chevrolet of Wayzata.