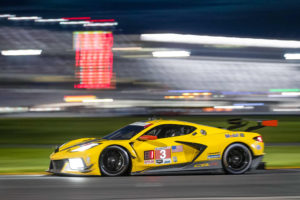 The No. 3 GT Le Mans (GTLM) entry, driven by Antonio Garcia and Jordan Taylor, with Garcia at the wheel, took the title for the first race back following the COVID 19 lockdown period. Garcia sprinted to the checkered flag with nearly a two-second ahead of the Porsche GT factory Porsche 911 RSR-19, driven by Earl Bamber and Laurens Vanthoor.

The other Chevrolet driven by Oliver Gavin and Tommy Milner started on class pole position and finished fifth overall in the No. 4 Mobil 1/Sirius XM Team Chevrolet Corvette C8.R.

It wasn’t the first time we had seen this C8.R either. Napleton.news was present when Chevrolet debuted the racing C8.R in full race trim at the Kennedy Space Center.

The Saturday win at Daytona was the 100th victory for the Corvette Racing team, whose program dates back to 1999. It would have likely come sooner except for the fact that racing was essentially shut down for five months and regardless of how compelling sim-racing may be, wins on a TV screen just don’t count.

“Congratulations to Antonio Garcia and Jordan Taylor on winning today’s (July 4) IMSA race at Daytona,” said Jim Campbell, Chevrolet U.S. Vice President, Performance and Motorsports. “Their win is twice as special for Chevrolet, as Corvette Racing has now achieved 100 victories in IMSA competition. It is also the first for the new mid-engine Corvette C8-R in just its third race.”

The # 3 GTLM race win hinged on tire strategy throughout, especially when you consider Florida’s unpredictable weather. Both Corvette C8.R race cars started on Michelin slicks even though the Daytona racing surface was still damp. Early on in the race, Taylor managed to go one lap longer on fuel than his competitors. When it was Garcia’s turn, he too, went longer as well, ending up directly behind the Porsche 911 RSR-19 of Earl Bamber, with 51 minutes to go in the race. They both stopped for fuel on the same lap, which became a drag race to the finish. At that point, Garcia made a winning pass with 31 minutes remaining and set the fastest GTLM lap of the race in the process.

After the win, Garcia said, “This was the perfect day for us with the first pole and first win for the Corvette C8.R. Hopefully, this is the first of many. We came so close with the (previous) C7.R. Now it’s time to win with the C8.R,” he added.

The road goes on forever and the party never ends. Corvette Racing will continue to build on its winning streak, heading to the classic Sebring International Raceway in Sebring, Florida, for the Cadillac Grand Prix of Sebring, Saturday, July 18.

If you need a mid-engine Chevrolet Corvette C8 fix before then, stop in at Napleton’s Chevrolet of Wayzata. Learn more about the new C8 and other Chevrolet vehicles today.