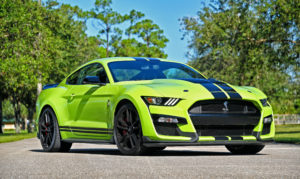 At Napleton.news, we like all cars. Even those we may not sell yet. So when offered the chance to get behind the wheel of one of the most powerful street cars built today, we thought, “what would our readers want us to do?” Of course, we did! You would have, too!

WHAT’S SO GREAT ABOUT THE SHELBY GT500?

How about pretty much everything? The Mustang Shelby GT500 starts with a standard Ford Mustang fastback shell, able to seat four passengers. Well, not really. It’s more at home carrying two passengers in the Recaro premium leather racing seats because, well, the rear seats are more at home carrying a weekend duffel bag or a small dog.

The heart of the Shelby GT500 is a 760 horsepower, supercharged 5.2-liter V8 engine with a seven-speed dual-clutch automatic transmission. It’s good for a 0-60 mph run in 3.5 seconds. That’s when the tires have the chance to hook up for optimal traction. It rides on a staggered set of massive Michelin Pilot Sport 4S tires. Four huge Brembo brake calipers are at all four corners and are ready to help bring the car back under control following the spirited romps we know that you are just waiting to experience.

Our tester was also equipped with a $1,500 handling package, which includes a Gurney flap and splitter wickers. Together, they are responsible for providing more than 200 pounds of total downforce on the car, which improves overall track performance and handling.

The current iteration of the Mustang, and by extension, the Shelby GT500 is one of the best-sorted interiors the car has ever worn. Higher grade materials ruled the day with soft-touch panels where they should be. Dials and toggles take the place of tiny buttons seen in other vehicles. The cockpit may feel tiny if you have shoulders as wide as a linebacker from the Bears, but everyone short of that will be fine.

The Recaro seats kept us firmly in place under heavy acceleration and cornering and offered all-day comfort. Careful, though, if tight side bolstering intimidates you because these bolsters really do a good job of holding you in place.

The Shelby’s infotainment system is complete with an 8.0-inch touchscreen display running the Ford Sync 3 system. Equipped with Apple CarPlay and Android Auto, it grabs and pairs your phone with ease, and allows nearly full functionality on most popular apps, even Waze. Ford’s proprietary navigation is also onboard and a 12-speaker Bang & Olufsen sound system is available as part of the $3,000 Technology package.

BEHIND THE WHEEL OF THE SHELBY GT500

The push of the starter button in the Shelby unleashes a visceral feeling that starts in the pit of your stomach and works its way up to your cerebellum, the spot where your senses are controlled. It’s both a fearful and pleasurable feeling you get from the gurgles of the 5.2-liter supercharged V8. The effect is one that thrills you and alarms your neighbors at the same time.

Finding a spot of clear highway allows us to stomp on the skinny pedal. The resultant roar could almost wake the dead, but the sudden push back into the seats might scare the daylights out of you first. Initially, we were disappointed to notice there was no shifter controlling the gears. Instead, we found a rotary dial that allowed us to set it and forget, save for the “M for Manual” button in its center. Either way, a quick gear change was only a squeeze away on the steering wheel-mounted paddle-shift levers. This way, we were able to bang up and down through the gears without removing our hands from it.

The acceleration from the 760 ponies underhood is sudden and smooth at the same time, thanks to the sheer power. If you are a track rat, the GT500 is equipped with Line Lock and launch control, which adds the proper amount of braking before the ‘tree drops to green. How fast you ask? Ford engineers have clocked the Shelby GT500 at 10.97 seconds at 127 mph.

After spirited runs like these, you are nothing if you have no brakes. That’s where the Brembo brake kit comes in. The Brembo system is utterly predictable and lets you tap them for some tail-wagging at the end of a turn. That’s plenty of good fun. It’s even more fun when you realize you are exiting that turn at nearly 85 mph!