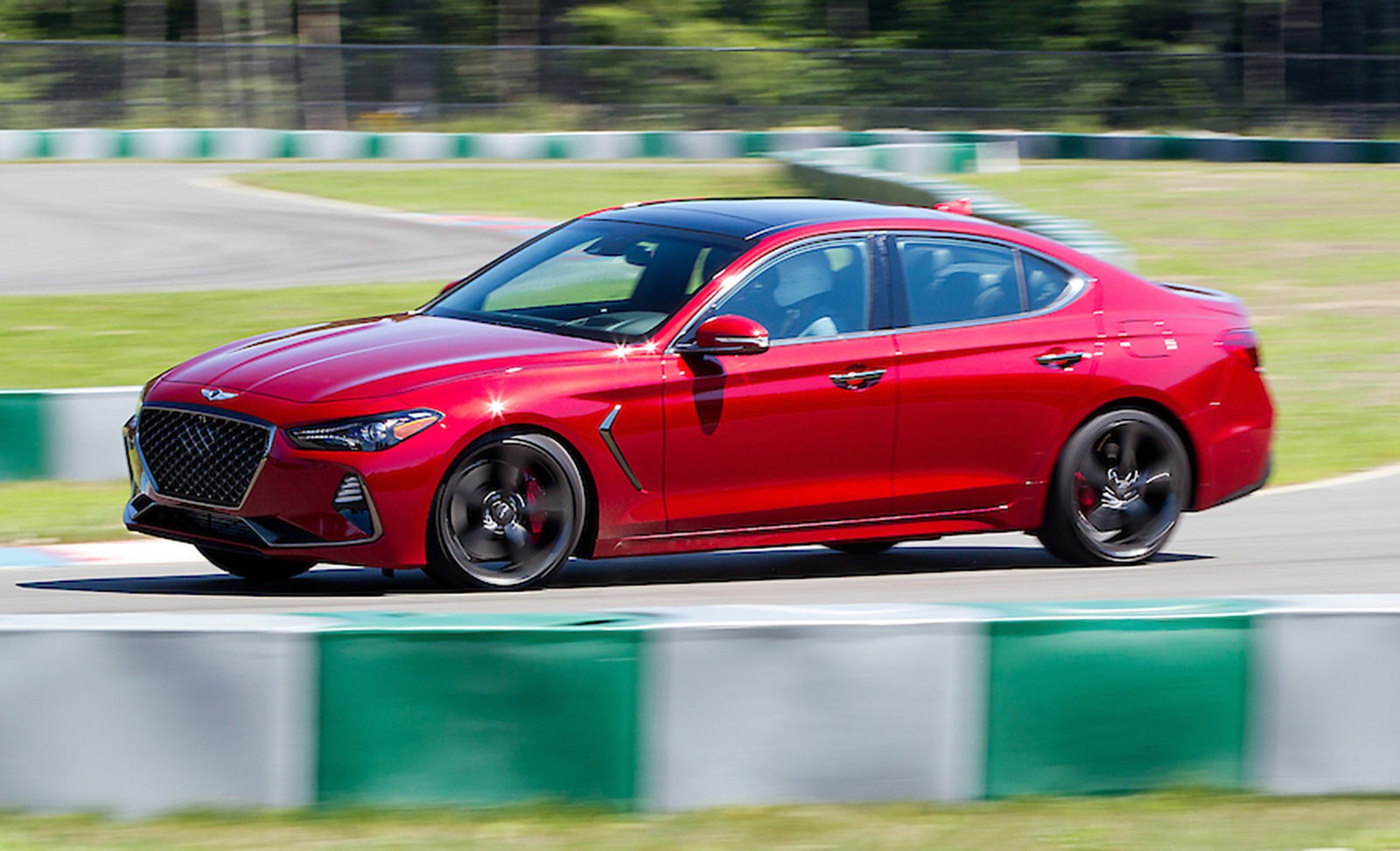 It’s a strange feeling, driving a Genesis G70 3.3 T, that actually elicits a feeling of envy from your neighbors. That was one of the original “Seven Deadly Sins,” wasn’t it? No matter, but we have to admit it is rather fun driving around while seeing the neighbors pick their jaws back up from the ground.

Although hardly a true “groundbreaking” sedan in appearance, The Genesis G70 3.3 T RWD Sport is still an innovative look at a three-box design that can hold its own against such luminaries as the BMW 3-Series or the Audi A4. The latest offering from the brand, now a stand-alone luxury car division of Hyundai Group, it is a combination of a compact sedan, and a Kia Stinger GT in one fell swoop. A sport grand touring sedan, it seats five passengers within its four doors.

Perfectly sized, the G70 uses plenty of but is not a direct clone of the Kia Stinger. Starting with the chassis layout, the G70 is approximately six inches shorter overall than the Stinger, with a wheelbase that is 3 inches narrower, as well. The result is a car that manages to handle better than some of its European competitors.

But who’s buying? We’d say the young couple who are just starting out together, or even some empty-nesters who are well on their way to downsizing their lives but still enjoy a good romp in, or out, of the house. Simply, the hotter the design, the more attention it attracts.

A new emphasis is angling its way through the Genesis Division. Not content to just build alternatives to those who would only consider a Lexus or Infiniti vehicles, Genesis realizes they already have skin in the game.

So what’s next, you ask? How about a version of the G70 featuring the same stout 3.3-liter Turbocharged V6 found in the Stinger, followed by its performance braking kit and adaptive suspension? Yes, please, we say.

Catering to the enthusiast buyer in the market, Genesis was not content to just “sticker up” a car to make it look cool without actually tweaking its guts. (We’re looking at you guys down in Plano, Texas) Instead, there’s some serious kit on the new G70 3.3T RWD Sport.

That kit includes the 3.3-liter and V6 making 365 horsepower at 6,000 rpm and 376 lb-ft of torque at 1,300-4,500 . That engine is mated to a Genesis 8-speed automatic transmission with levers and and can be remapped using the Drive Mode Selector to change from Eco to Comfort to Sport. There’s a differential to maintain traction, too. Round it out with the Sport package featuring an electronically controlled suspension and a set of Michelin Pilot Sport 4 tires and you have a car that wants to stick like a piece of gum to the bottom of your shoe on a hot summer day on a piece of steamy asphalt. No, that’s never happened before.

While the 2.0-liter turbocharged four-cylinder is available standard with a six-speed manual transmission, you only have one choice with the 3.3-liter V6. Mated to an eight-speed automatic transmission, is it good for a 0-60 mph time of 4.5 seconds.

As such, this automatic transmission-equipped G70 model is equipped with launch control so you can take off like a rocket from Space-X. Of we may be fudging to favor a good story, but you can disable traction control and even activate “drift mode” that allows some if you are so inclined. We don’t think it will catch on with the members of the country club, but at least the valet guys will be able to have fun with it, outside in the parking lot.

The new Genesis G70 is awash in almost what we would call Teutonic Elegance, which is not too shabby for a South Korean-built sport sedan. Having a select group of European Car design veterans on board doesn’t hurt and in this they have brought their best to the table. Cocooned inside a cockpit made of diamond-tufted leather that could make some British brands green with envy, drivers will find themselves driving in comfort whether on the track or the street. Touches like these really make the Genesis brand a certified member of the luxury segment.

The telescoping and tiltable steering wheel allowed us to get comfortable within the cabin for the drive ahead. Shifting the drive mode selector into Sport mode highlighted the instrument display in red and instantly squeezed the seat bolsters together for a grippier experience behind the wheel. It was at this point that we began channeling our inner Formula 1 selves, as we worked the steering wheel-mounted paddle shift levers, banging through the gears on the way home.

The G70 3.3T’s in-car entertainment system was bound by an eight-inch display in the center of the dashboard that anchors the Lexicon 15-speaker audio system with Quantum logic.

Also included: Clari-Fi circuitry from Harman. An innovative technology, it helps to restore the sound that was lost during the digital compression recording process.

A little co-mingling was going on between Genesis and its Hyundai Group while designing and outfitting their G70 line of vehicles. With the addition of Albert Biermann from BMW’s M division to head up the N vehicle division of Hyundai Group (Hyundai, Genesis Kia) and former Volkswagen designer Luc Donckerwolke to head design efforts at the brands, there is a lot ahead for the group. In other words, keep your eyes on the Genesis brand.

And their current efforts are apparently paying dividends: Once known for reliability and value, the brand is now known for…can we say it (?)…Sexiness. This is a new cult classic with looks, power (0 to 60 mph in 4.5 seconds) and handling in one tight package. Oh, and did we mention ? It’s here in spades.

The Genesis G70 3.3T has, at this point, no real legacy to speak of, which will actually end up working in its favor. Free to blaze their own trail, they have a few empty shelves in the trophy case. Judging by the new G70, they won’t be empty for long.