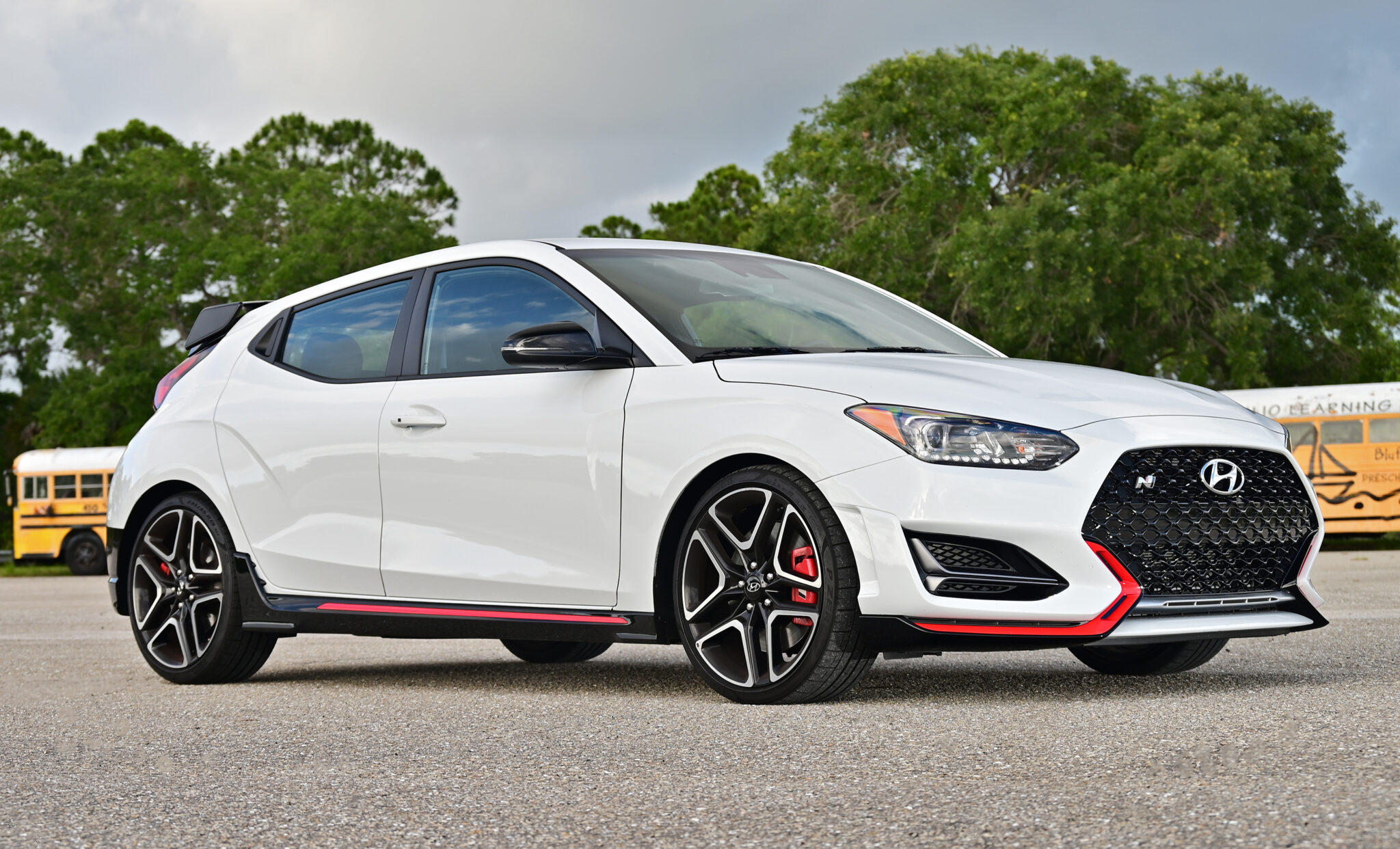 The 2021 Hyundai Veloster N is a real-life example of what Hot Wheels would have done had they been tasked with designing a miniature hot-hatch. It’s a helluva ride and one that we wish we had more time in. But such is the job of a Napleton.news automotive journalist. Instead, we will tell you why the Veloster N is such a compelling ride.

THE HYUNDAI VELOSTER N IN A NUTSHELL

The Hyundai Veloster N is the product of Albert Biermann and Thomas Schemera and their team at the N werks. N, which stands for Namyang, is the location of the Hyundai R&D facility. It’s where the cars are developed, but the real work, er werk, occurs on the Nurburgring in Germany.

A “corner rascal,” the new Veloster N is a result of the brand’s success in motorsports and will cascade down to all future N Products, according to Schemera. N President and Performance Division head Biermann says the purpose of the division is not only to attract the well-established enthusiasts and track day guys. It is also to attract many people who never had such a car before.

“This is an affordable, fun-to-drive car that many people can afford. You don’t need to buy a fancy $3- 4,000 dollar option package to go to the track. That’s not our plan. If you buy an N car, it’s good enough for the track,” said Biermann. That’s a case of biting the hand that used to feed you, as Biermann in a past life was the head of BMW’s high-performance M Division.

For the record, the Hyundai Veloster N competes against the Volkswagen Golf GTI, Honda Civic Type R and the Subaru WRX.

Power for the Veloster N comes from a stout 2.0-liter turbocharged inline-4 producing 275 horsepower and 260 lb-ft torque. Gasoline direct injection feeds it. A choice of 6-speed manual gearbox or an 8-speed Auto-Shift DCT helps to shift it through the gears. It’s an extremely high-performance transmission developed in-house that has been beefed up with advanced thermal capacity for the added loads an enthusiast is likely to put it through.

A new feature is the N Grin Shift (NGS) mode that increases peak torque by 7-percent from 260 lb-ft to 278 lb-ft of torque. Using turbocharged overboosting causes the powertrain to shift to its sportiest program for up to 20-seconds of additional boost. Consider it similar to a power boost from a Formula 1 car’s drag reduction system (DRS).

The N Power Shift (NPS) helps shift without torque reduction by using upshift functions for maximum power to the wheels. It offers smooth shifts while the driver concentrates more on car control than the next gear change. This results in a factory claimed 0-60 mph time of 5.6-seconds. There’s rev-matching, launch control and the ability to sense driving styles and characteristics. Hyundai claims the Veloster N can sense how the driver is pushing the car and react accordingly.

The Veloster N is similar in appearance to the standard Hyundai Veloster. It’s a three-door, four-passenger hatchback that features two doors on the passenger side and a single driver’s door. There is a back seat large enough for two passengers, one of who will have to slide across before buckling up.  Once there, there are 34 inches of legroom and 20 cubic feet of cargo space behind the rear seat. Fold them forward and that space climbs to 44.5 cubic feet.

DOES WHAT’S INSIDE COUNT?

Absolutely! That’s why such care was taken in designing the layout. N light sport seats feature leatherette seating surfaces with upgraded bolstering to hold the driver and passenger in place during aggressive turns on the track. They are thinner than the standard Veloster and 4-pounds lighter as well.

On the dashboard, an 8-inch Navigation system is standard in the Veloster N, complete with an Infiniti Premium Audio System, an external amplifier and eight high-end speakers, including a sub-woofer. Apple CarPlay / Android Auto are also here, as is a rearview camera with dynamic guidelines.

If we were to give it a nick, it would be in the area of the hard plastics found on the doors.

It’s not just a hot-rod. It’s a safe hot-rod. A little redundancy never hurt anyone. In addition to all the standard passive safety devices, the new Hyundai Veloster N is loaded with a safety suite that includes Forward Collision-Avoidance Assist (FCA), Blind-Spot Collision Warning and Rear Cross-Traffic Collision Warning. There are others, including Lane Keeping Assist, Lane Following Assist, Driver Attention Warning and High Beam Assist.

BEHIND THE WHEEL OF THE VELOSTER N

Firing up the Veloster N greets you with a throaty gurgle and a ripping exhaust note that makes any of the Veloster N’s competitors sound like they are clearing their throats, bless their little hearts. Getting underway finds a hot hatch that can be as docile as you like with a drive selector that puts the N on a comfortable footing. Flick it into Sport mode and take advantage of all the Veloster N has to offer.

While in normal street mode, the Veloster N acts like a standard Veloster. That is until you flick the N button, transforming the N from a Dr. Jekyll to a Mister Hyde. At that point, the vehicle changes into its alter-ego, which can be tailored as mild or wild as you like. Launch control allows you to stomp on the brakes and, at the same time, load the accelerator, building engine revs up to 3,500 rpm. Take your foot off the brake and the car lurches forward, chirping the tires in second and third gear.

The Hyundai Veloster N is one of those rides that will find you running out of road before the car runs out of fun. That’s our kind of hot hatch!