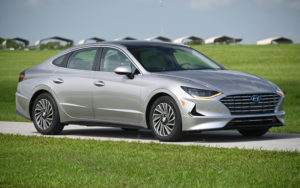 The 2020 Hyundai Sonata Hybrid is the answer to a question that comes up quite frequently these days. What if a company offered a five-passenger, four-door sedan that is both sexy and capable of highway mileage to the tune of 52 miles-per-gallon? Your honor, Napleton.news offers exhibit “A.”

Already one of the most popular vehicles on the road, the new Sonata Hybrid offers the same good looks, with amazing mileage and a price that undercuts the competition by thousands. It will be available later this month at all Napleton Auto Group Hyundai dealerships.

WHAT IS THE HYUNDAI SONATA HYBRID?

In a phrase, the Hyundai Sonata Hybrid is like a regular Sonata, only smarter! With the ability to carry up to five passengers, the Sonata Hybrid takes the best of the gas-based version and builds on it. While most hybrid vehicles seem to be a compromise, whether in the mileage, storage space, or looks departments, the Sonata Hybrid fires on all cylinders (pun-intended) without compromise.

The Sonata Hybrid is powered by an award-winning 2.0-liter four-cylinder Hyundai Smartstream GDi engine with a six-speed hybrid automatic transmission. The engine’s base power checks in at 150 horsepower and 139 lb-ft of torque. Add to that a 39 kW electric power generator using 270 Volts of lithium-ion battery charge for a combined output of 192 horsepower. It’s a mouthful, for sure, but wait: There’s a payoff! This two-stage powertrain is capable of 50 city/54 highway/52 combined miles per gallon!

But there’s more: the Hyundai Sonata Hybrid’s solar roof panel directly charges the 12-volt accessory system and hybrid batteries at the same time. This charging provides the Sonata Hybrid with approximately two additional miles of electric power each day. That equates to more than 700 FREE miles per year!

The new Hyundai Sonata Hybrid has a really big brain. No, seriously, it really does. Part of that brain controls the Active Shift Control that monitors engine speed up to 500 times per second, and in turn, aligns the electric motor with the rotational speed of the gas engine and transmission to reduce gear shifts by up to 30-percent.

“The development of the world’s first ASC technology is a remarkable innovation that incorporates precise motor control to an automatic transmission,” said KyoungJoon Chang of Hyundai Powertrain Control Systems Group. “It will not only save fuel but also provide a more fun driving experience for our customers.”

Lavishly designed, with a five-bar grille, the new Hyundai Sonata Hybrid is a visual stunner. The Hybrid is available in three trim levels ranging from base Blue, SEL and Limited. We tested the top-shelf Limited model, which included a rather trick looking solar panel glass roof. And then there is the daylight running lights that are LED strips that boomerang around the headlamps and streak up the hood, only fading away as things start to get interesting on other parts of the Sonata body.

Sharp creases flow from the front wheel wells heading rearward through the taillight lenses and up to a slight, but effective rear spoiler. It’s an innovative look that you won’t see on many other vehicles, but at the same time, it’s not so outlandish that it looks out of place, either. Bottom line is this: It’s a good look that we took to, at first sight.

The inside of the new Hyundai Sonata Hybrid featured a mix of technology and airiness. We know that’s a strange combo, but the reality is it’s a well-thought-out interior with loads of features. They include a pair of comfortable front seats that offered plenty of support for drives that lasted more than two hours. Our Limited tester included a 10.25-inch high-resolution touchscreen display and 12-speaker Bose premium audio. A Qi wireless charging pad takes up space at the base of the center console.

The Sonata Hybrid’s seating offers enough space for large adults at all four corners of the cabin, although if you are over six-feet tall, you might enjoy the front seats better. Thanks to some clever packaging, the new Hybrid has more trunk space than found in the standard Sonata. Now that is quite a trick!

From the moment we engaged the starter button of the Sonata Hybrid, it was like we had been here before. Sure, the interior was entirely new and different, but it was all familiar too. We were happy to see the standard safety accoutrements like blind spot warnings, and a surround-view rearview camera, which joins other standard features like Forward Collision-Avoidance, Rear Cross-Traffic Collision-Avoidance, and Advanced Smart Cruise Control.

Motivation from the 192 horsepower-combined powertrain was smooth and almost, dare we say, car-like, from the moment we squeezed the skinny pedal to the time we reached cruising speed. Credit goes to the Active Shift Control that delivers a more substantial feel than the CVT transmissions found in other hybrid-electric vehicles.

The most trick piece of hardware on board, though, was the Blind Spot Collision-Avoidance system that turned on when you engaged the turn signal lever. At that point, the gauge positions on either side of the control panel reveal what may be in your blindspot behind you.

The motoring press is totally jazzed about the new Hyundai Sonata Hybrid. We think you will be, too. For more information, or to find out how good a Hybrid vehicle can be, contact the Napleton Auto Group Hyundai dealership near you.