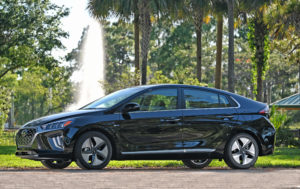 The new Hyundai Ioniq Hybrid Electric Vehicle (HEV) is the anti-Prius. There. We said it. It is a four-door, five-passenger hatchback that looks and acts pretty much like a regular, everyday vehicle, except that it can do so and still manage to get a fuel economy average of 58 miles per gallon!

That’s quite a feat!

What else can it do? Buckle in while Napleton.News spends some time with the new Hyundai Ioniq Hybrid.

WHAT IS THE HYUNDAI IONIQ HYBRID?

One of three vehicles, the Hyundai Ioniq Hybrid is the point of entry for Ioniq buyers. It is a four-door, five-passenger hatchback that is also available in Plug-in Hybrid and pure-Electric versions. We think the traditional Hybrid is the best of both worlds, offering the ability to get stellar gas mileage and the ability to go a short distance on pure electric power. The best part is the Ioniq can recharge its batteries–while driving–without having to stop and plug-in.

Power for the Hyundai Ioniq Hybrid comes from a 1.6-liter Atkinson-cycle four-cylinder engine that makes 104 horsepower and 109 lb-ft of torque. It is combined with a 32-kW Permanent Magnet Synchronous Electric motor powered by lithium-ion polymer batteries that provide 43 horsepower and 125 lb-ft of torque. The global system output for this combination is 139 horsepower. This powerplant is mated to a 6-speed EcoShift Dual-Clutch transmission, which is similar to those found in sports cars costing thousands more. It results in a hybrid fuel economy of 55 city/54 highway for the combo and 57 city/59 highway while in electric mode for a best-in-class equivalency in the Country.

The entire Ioniq lineup features a new safety feature called Automatic Emergency Braking. Standard throughout the range, it uses a camera and sensors to watch for vehicles that may cause an accident. The system will alert the driver, and in some cases, can bring the Ioniq to a complete stop.

Conventional in design and layout, the Hyundai Ioniq uses materials that look like they came right from a premium luxury vehicle instead of a fuel-efficient hybrid. A large 10.25-inch touchscreen display is the most prominent feature of our example. Though it sticks up quite a bit, it offers a generous amount of vehicle information, as well as access to the traditional features on the display. These include audio, climate, navigation and smartphone integration. That audio system, by the way, is a Harman/Kardon premium audio kit.

Our sample was equipped with a two-tone leather interior that offered comfortable seating in both the front and second row. We were genuinely surprised at how much actual space was in the back seat. We also thought the chrome door sills and other accents helped to set off the dark interior.

As a bonus, the Ioniq Hybrid is complete with smartphone convenience items like Apple CarPlay, Android Auto and a wireless charging pad standard.

There is very little in or on the Ioniq to tip you off that you are driving a hybrid or alternative fuel vehicle. And we say that’s a good thing. Hyundai has managed to avoid any sort of tragically hip design that looks like George Jetson, his boy Elroy, daughter Judy and Jane, his wife, just hopped out of the Ioniq.

Still, designers penned the Ioniq with aerodynamics and light-weighting in mind. As such, they fabricated the hood and liftgate in aluminum. Chrome accents abound, as do the convenience of automatic folding mirrors, which tuck out of the way in tight parking spaces.

The lighting is top shelf as well, thanks to the use of LED headlights, taillights and running lights all around.

In a word, refined. We’d toss in elegant, too. If you didn’t know any better, we’d say you wouldn’t be able to tell you are in a hybrid electric vehicle, which is exactly the point! If you were to get behind the wheel of this Ioniq, you would think you’re in an Elantra or other Hyundai vehicle, instead. There is no tell-tale shift from gas to electric or vice versa.

The six-speed dual-clutch automatic transmission operated smoothly and without hesitation. Still, we enjoyed the steering wheel-mounted paddle shift levers allowing us to pretend we were driving in the Grand Prix of Monaco rather than rush hour in West Palm Beach. Acceleration is decently fast during a daily drive. You can even go faster by engaging the Sport button on the center console, but your mileage may suffer. You have been warned! And the Ioniq Hybrid is the perfect car to go cross-country in. Unlike the pure electric Ioniq EV, if you have fuel in the tank, you are good to go. And go. And go. We have the new Hyundai Ioniq Hybrid in stock at all Napleton Auto Group Hyundai dealerships. Please contact the Hyundai experts at the Napleton Hyundai store nearest you for more info