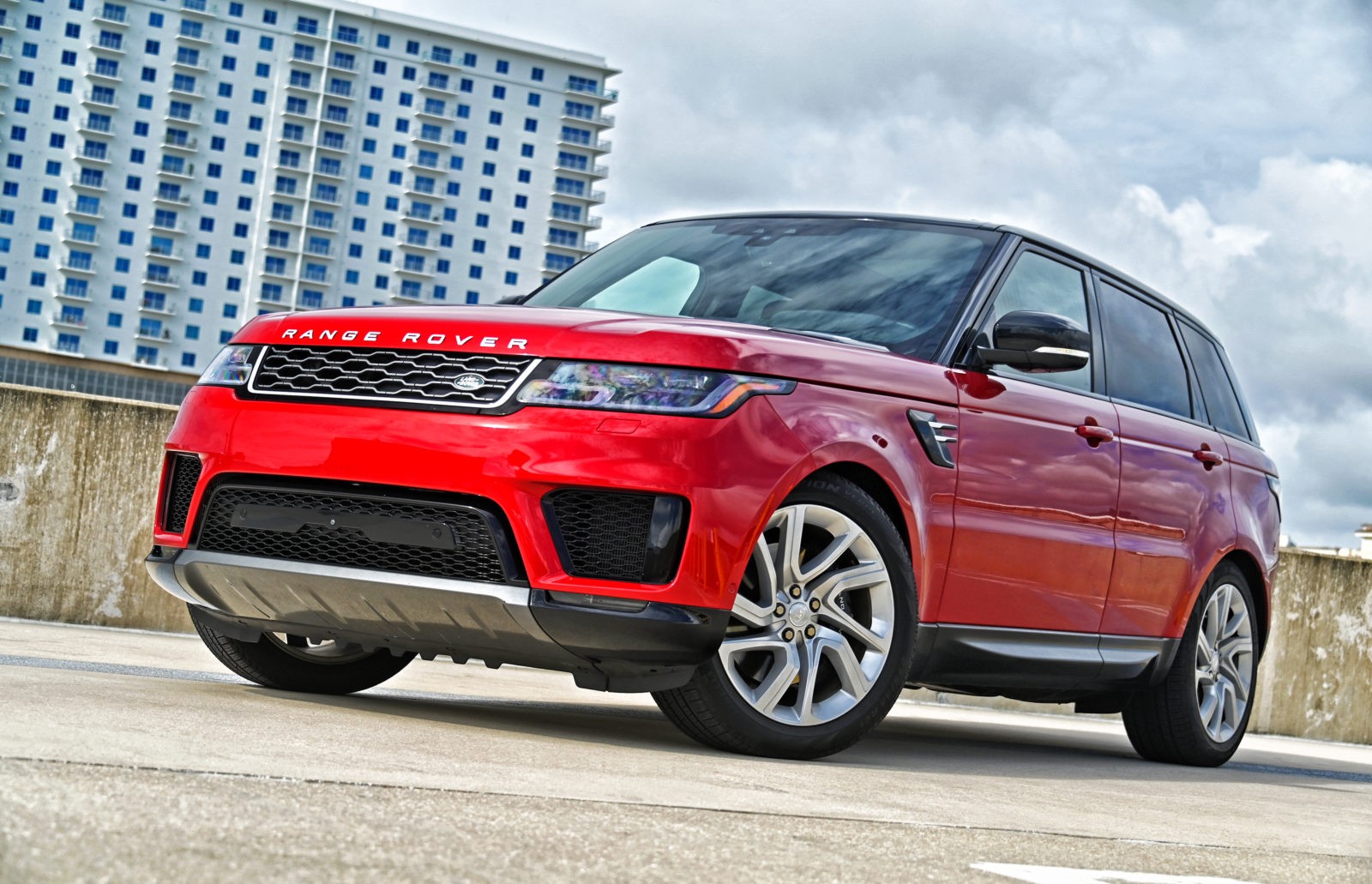 Firenze Red is not a color for wallflowers. it’s a hue for those who want to be observed in the vehicle bearing it. 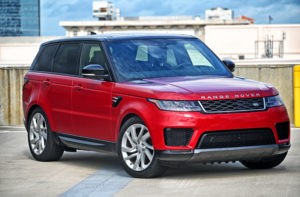 A plug-in hybrid wasn’t always the answer when it came to alternative fuel vehicles. It is even a greater stretch when you consider the bearer of this Plug-in Hybrid Electric Vehicle is the new Range Rover Sport HSE P400e. But at the end of the day, Jaguar-Land Rover realized the benefits that exist over diesel or regular petroleum-engined Rangers.

According to Land Rover, the new Range Rover Sport is a luxury performance SUV with dynamic on-road character. A five-passenger, four-door hatch-equipped all-wheel-drive SUV, it is powered by a combination of a 296-horsepower 2.0-liter Ingenium turbocharged four-cylinder engine that is mated to a 114-horsepower Plug-in Hybrid Permanent Magnet Electric Motor. 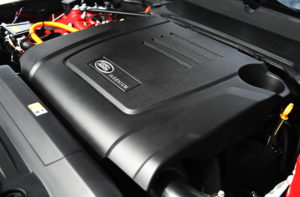 That electric motor receives power supplied by a 13.1-kW-hr lithium-ion battery mounted under the rear cargo area floor. Total system output, using the new math, is 398 horsepower and 472 lb-ft of torque, which yields a vehicle that is more potent than the diesel and supercharged V6 sport models. Zero to 60 mph comes on in 6.3 seconds, for quite a ride from what is essentially a flying brick.

This Ranger has a ZF eight-speed automatic transmission sending power to an all-wheel-drive system with transfer box. That transfer box provides a 50:50 torque split and helps coordinate operations with the Land Rover Terrain Response2 system with Selectable Driving & Off-Road modes that includes a comfort mode that calibrates the suspension to optimize ride comfort.

It also includes a Dynamic setting that is designed to offer a more capable ride. Drivers can settle upon five settings ranging from Grass Gravel Snow, Mud/Ruts, Sand, Rock Crawl and Eco settings.

Several benefits are realized by the use of the settings. In Eco mode, feedback is delivered to the driver, ranging from highlighting the effect of certain features or driving style on fuel economy, as well as ways to help you minimize your electrical usage. It will also help to “soften” the throttle pedal response for added economy.

A fully-fixed panoramic roof lets the sunshine in. It also opens up the darkness of the full black interior with Windsor leather bucket seats. A new “glass cockpit” features several touchscreens that operate the Navigation, Audio, Communications and HVAC controls. It’s a vast improvement but one that never met a it didn’t want to collect. 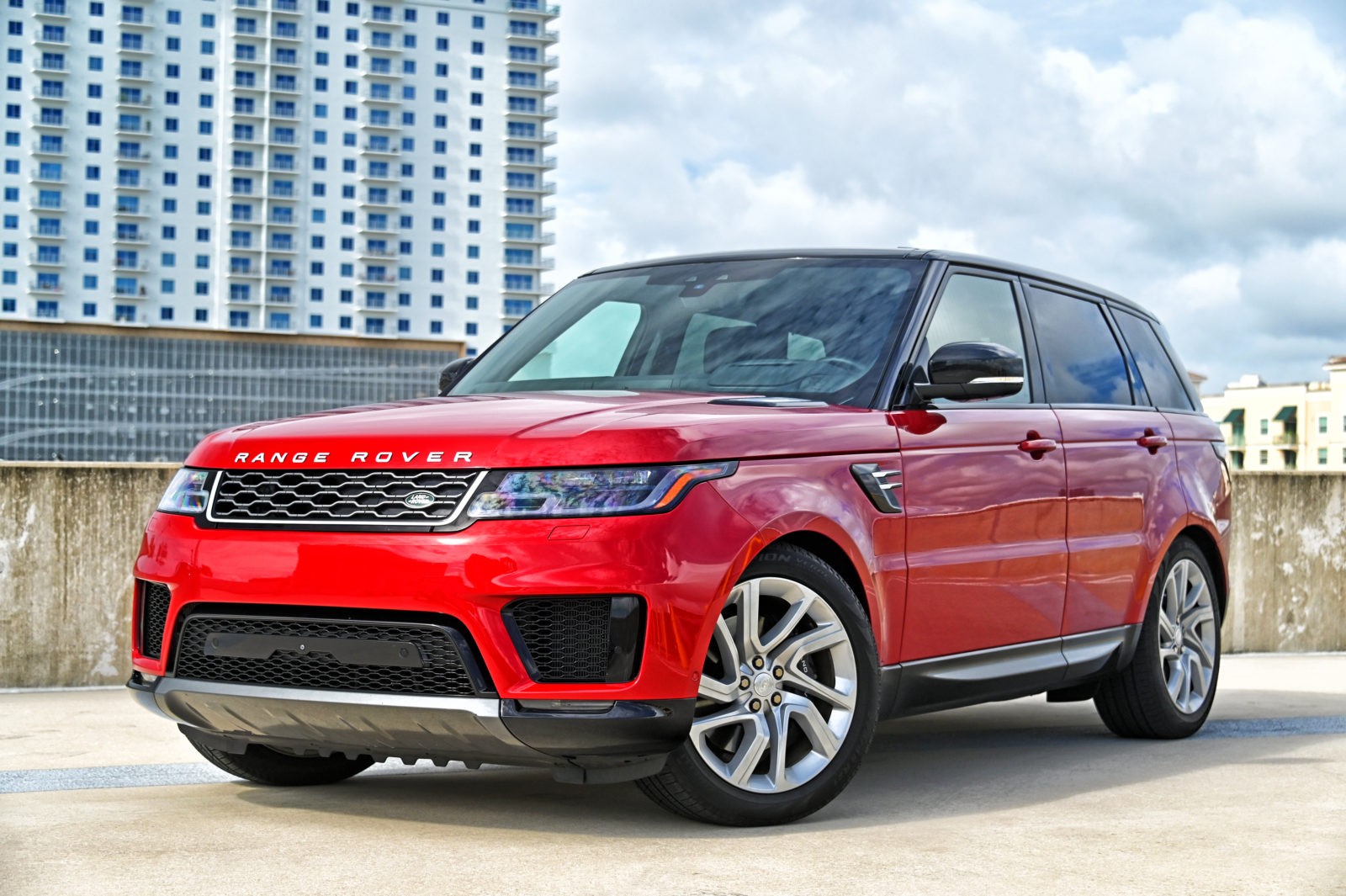 The Range Rover Sport also takes advantage of JLR’s Low Traction Launch System to provide extra traction when pulling away on slippery or wet surfaces like wet grass, loose gravel or snow. It is joined by Hill Descent Control (HDC) which helps your “Sport” creep down a steep hill without causing the driver to have to ride their brakes on the way down. We have tried it numerous times and think it’s the greatest thing since cold pizza. (There’s no such thing as bad, cold pizza, btw).

And while on the subject of amazing feats, this Range Rover Sport features a Wade Sensing warning system on US Models. Think of it as a depth finder on a boat. It tells you, in , the wading depth you are currently driving through and how much more depth exists before you have reached the limits of the Range Rover Sport’s capability. 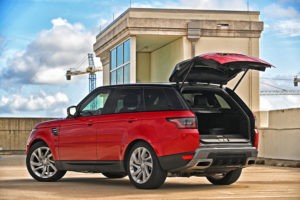 The Range Rover Sport Hybrid P400e comes standard with a four-corner air suspension that can tuck down the Ranger’s stance by more than half-an-inch at speeds above 65 mph.

In the front, it utilizes a with swivel axis, followed by an integral multilink suspension kit in the rear. Steering is provided via an electric rack and pinion system. It rides on a 115.1-inch wheelbase with an overall length of 192.1-inches. There 24.8 cubic feet of space behind the seating. Fold those seats forward and that space increases to 56.8 cubic feet. Towing is a very capable 5,500 lbs 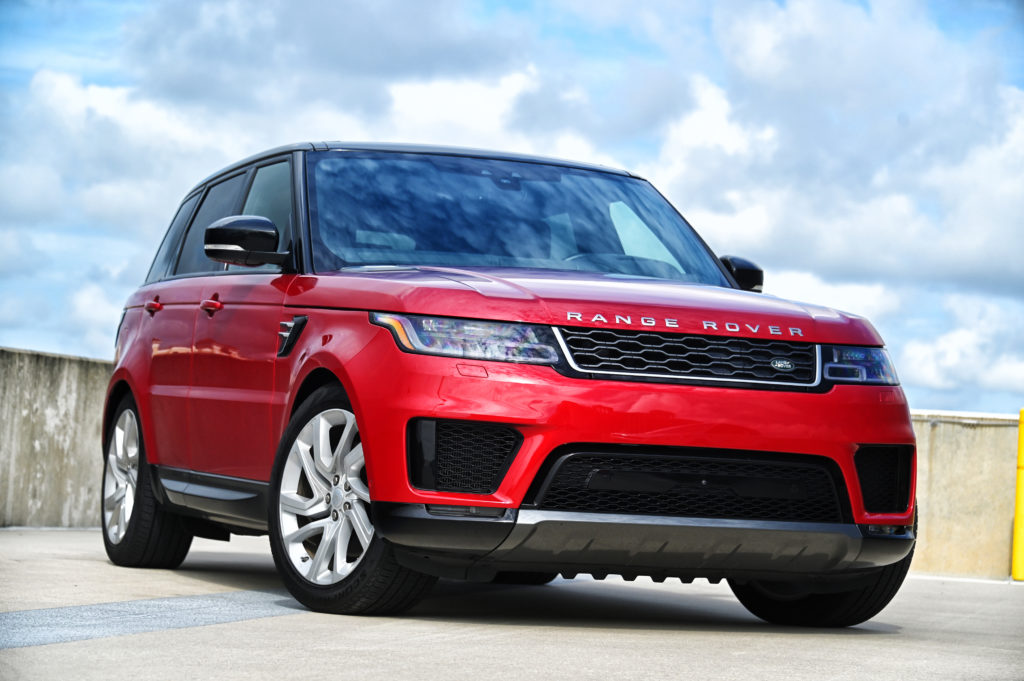 The Range Rover Sport P400e Plug-in Hybrid is a great looking vehicle that would typically be driven on Safari or by a Supermodel through the Serengeti or on South Beach. In this it’s driven by me through the Treasure Coast of Florida. Last time I looked, I was not a supermodel. Not even in the same zip code. But no matter. I still felt as though I was all that while driving down the Florida Turnpike. Cocooned by an ultra-quiet, seemingly glass interior, our Ranger cruised along over smooth then choppy, then smooth once again, highways and backroads, without missing a beat. 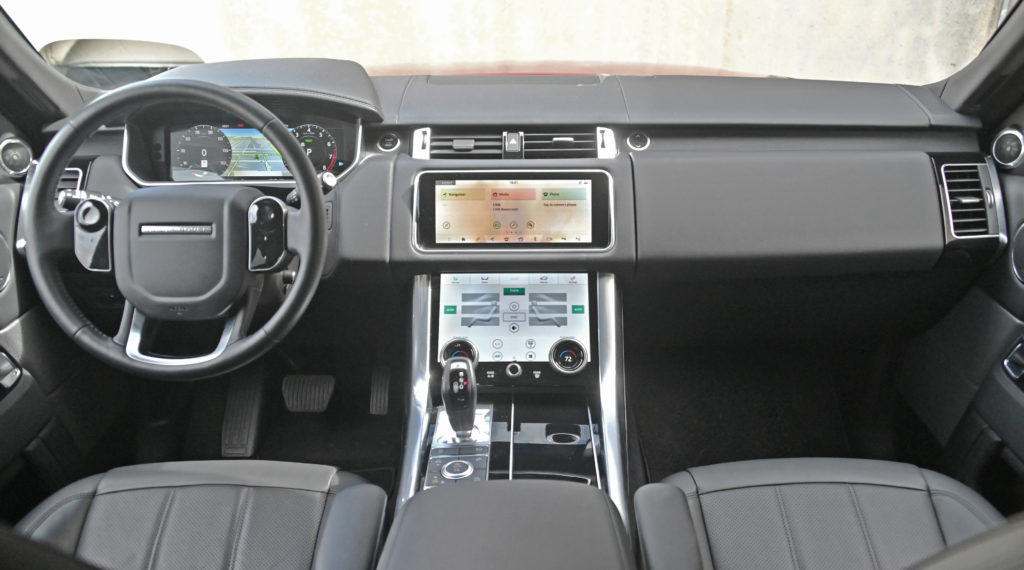 Acceleration from the powertrain combo consisting of a 2.0-liter turbo four-cylinder with 114 horsepower permanent magnet electric motor was surprisingly quick and robust, pushing me and the spousal unit straight back into the bolstered bucket seats . That’s because when you combine the two power units, both electric and internal combustion, you end up more power than exists with the supercharged 3.0-liter V6. Overall, it’s a faster package that ends up being quicker to 60 mph, despite the fact it’s heavier than the regular gasoline-burner. 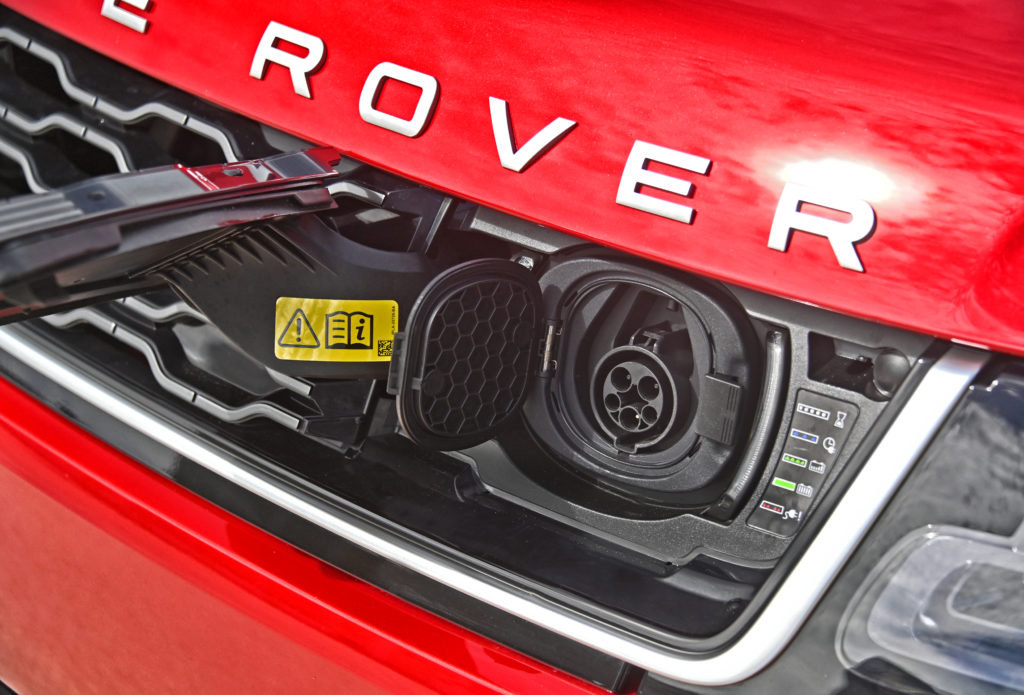 But there are a few issues. Charging via the standard 120-volt plug-in will top you off after about 14 hours. It’s for that reason alone to consider the 240-volt charger. A Level 2 charger like ChargePoint will do the job in about 3 hours, which is still a bit tedious unless you find a charging spot and you are in a Chef’s tasting dinner which will occupy your time for a minimum of three hours. In that you will return to find both you and your vehicle refueled. 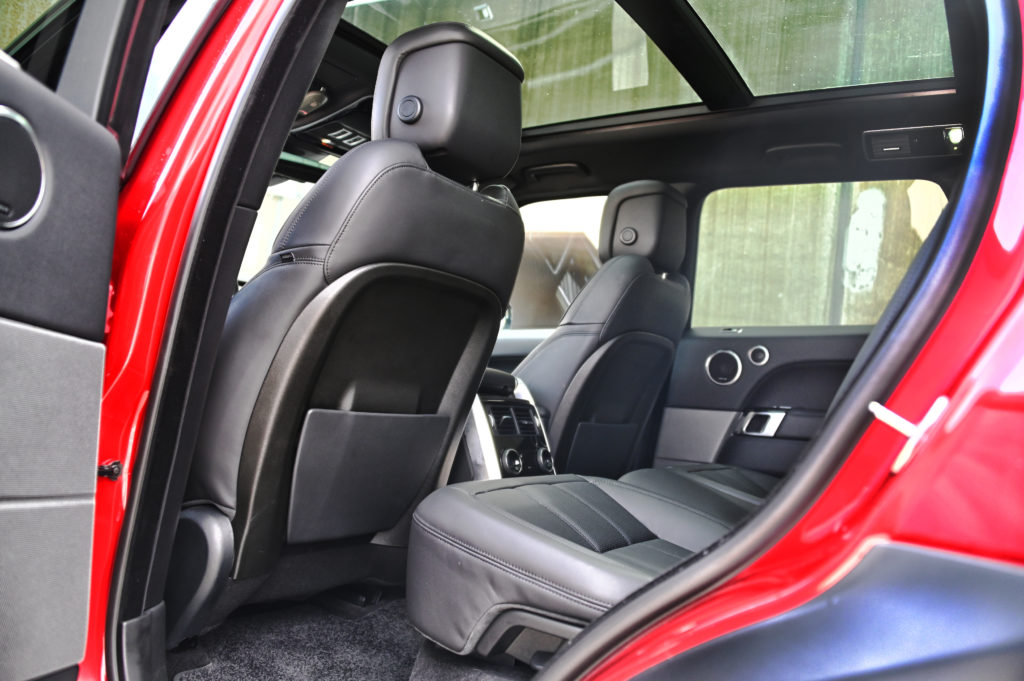 Vehicle geometry is another area that raised the hair on our neck. The Ranger is, like many SUVs a tall-riding vehicle that despite its lowering suspension will not have you feeling as though you can trade licks with one of its Jaguar automobile cousins. Instead, owing to its high ride point, the Ranger Sport will wrap gently around a curve…keeping it upright, rather than putting it into a heavy lean. 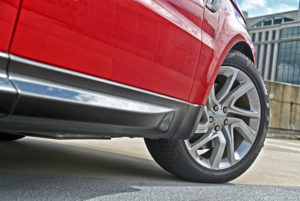 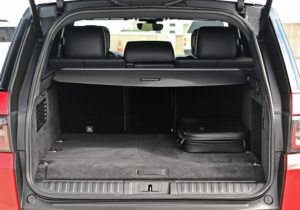 Sure, it’s not a sports car. It was never meant to be. Instead, this Range Rover Sport is content to be the all-wheel-drive vehicle that we have always known it was, with the added benefit of being an environmentally friendly one, too.

And for the moment, we can pretend to be a supermodel, too.