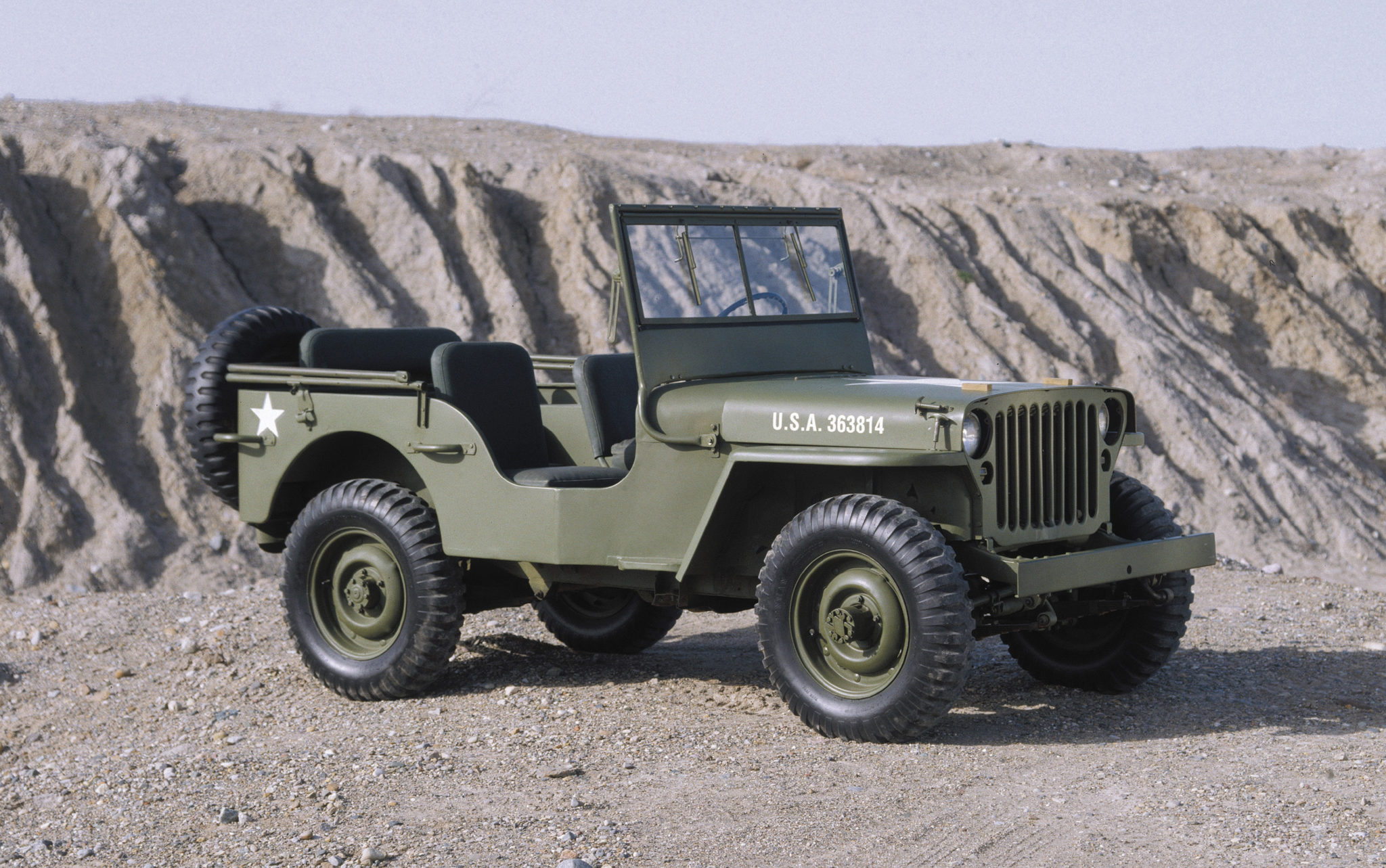 Historical Jeep vehicles were how it all started. A Jeep is one of the most popular brands on the road today and with good reason. But it also has quite a history, too. What, you thought your Jeep just materialized at the dealership, waiting to be sent to a good home? Check out what the extensive research from the staff of Napleton.news turned up for a new-found appreciation!

HISTORICAL JEEP VEHICLES: IN THE BEGINNING

The original Jeep began life as the “U.S. Army Truck ¼-ton, 4×4 Command Reconnaissance” vehicle. It was the primary light wheeled transport vehicle to be used by branches of the U.S. Military and its allies during the Second World War. These included Russia at the time!

The 4×4 Command Reconnaissance vehicle was the world’s first mass-produced four-wheel-drive car, numbering over 650,000 copies. The contracts to build the vehicles were carried out by the Willys and Ford Motor Companies. Dodge built the Dodge WC series of vehicles, which, although similar to the Army’s original design, came out looking slightly different than the “General Purpose” design originally requested by the military.

Described as having an almost “mythological reputation of toughness, durability and versatility,” these historical Jeep vehicles had a high degree of adaptability that allowed it to be modified for a wide range of tasks. The GP, or Jeep as it was then being called, was so valuable to the war effort, that Gen. George Marshall called the squared-off little car “America’s greatest contribution to modern warfare.”

Both Willys and Ford continued to improve the vehicle in the late 1940s and early 1950s. Willys even went so far as to trademark the Jeep name, turning the Willys MB into the Jeep CJ. By then, the company renamed the entire shebang the Jeep brand. Following the war, the Willys company planned to offer the Jeep as an off-road vehicle for the farm. It would become the Universal Jeep. According to Jeep historians, Willys used “The Sun Never Sets on The Mighty Jeep” as one of its slogans. The company made it a point to make sure the world recognized it as the creator of the Jeep.

Its success inspired an entire category of recreational 4WD vehicles that led to the Jeep Wrangler. These historical Jeep vehicles were the start of what is now one of the most popular- and profitable brands made today. Some of the highlights as a brand include the following:

JEEP CJ-2A: The first civilian model, it was produced in 1945. It included a tailgate, larger headlights, a side-mounted spare tire and an external fuel cap. Power came from a 134-cubic-inch Inline four-cylinder and a three-speed T-90A manual transmission. It was fed through a Spicer transfer case and sent to Dana front and rear axles. It was produced for four years until 1949. Various updates to this basic design resulted in models such as the CJ-3A, CJ-3B and more. In 1953, the Willys-Overland company was sold to Kaiser, which worked to broaden the Jeep brand.

JEEP CJ-5: 1955-1983 In 1955, Kaiser introduced the CJ-5, with its rounded front-fender design. This new model was larger than the previous model thanks to a longer overall length and wheelbase. There were other improvements to the engines, axles, transmissions and seating comfort. These updates were perfectly timed to coincide with the public’s new-found interest in off-roading.

The Kaiser company became Kaiser Jeep in 1963. During that period, the company pioneered the design of the Jeep Wagoneer and Jeep Jeepster marques that became the first of what would come to be known as sport utility vehicles. It was all for naught, though, because in 1969, Kaiser Industries chose to leave the automotive business altogether and sold all assets to American Motors Corporation (AMC). AMC expanded the line of Jeep Cherokee and Wagoneer models, which made a huge splash during the 1984 model year. In 1987, Chrysler acquired the American Motors brand, continuing with several sedans and other vehicles. But then Chrysler chairman Lee Iacocca made it clear he was really interested in the Jeep brand, to the exclusion of the other parts of AMC. Along the way, many AMC dealerships switched over to begin selling Chrysler products, which expanded their retail base.

OTHER JEEPS OF NOTE:

The Willys MB and later the Jeep Wrangler were not the only Jeeps of note. We scoured the files in the Jeep Heritage office and came up with these examples of favorites from another era.

Jeep Willys Wagon: 1946-1965 The Willys Wagon was an SUV-style wagon with a 104.5-inch wheelbase. The company introduced a four-wheel-drive version, which was wildly popular with enthusiasts.

Jeep FC 150/170 Pickup: 1957-1965 FC for “Forward Control,” the Jeep FC models were work vehicles with either an 81-inch wheelbase for the FC 150 or a 103.5-inch wheelbase for the FC 170. They remained almost unchanged during their life cycle, with the exception of a full-floating front and rear axles in the 1959-1960 models. The Jeep FC trucks were the inspiration for later concept vehicles, which included the 2012 Jeep Mighty FC, which was much bigger than it had any right to be.

Jeep Wagoneer: 1963-1983 The first four-wheel-drive (FWD) vehicle to be mated to an automatic transmission, which helped to establish it as the first SUV. It was also available with an optional independent front suspension. Other innovations included Quadra-Trac automatic four-wheel-drive, which was available from 1973 onward.

Jeep Comanche: 1986-1992 The Jeep Comanche was a pickup truck that was rooted to the Jeep Cherokee platform, and featured similar engines and transmissions. Later models were available with Selec-Trac or Command-Trac four-wheel-drive.

STILL MAKING HISTORY IN A JEEP

Jeep is still alive and kicking stronger than ever, and it doesn’t look the company will be taking a break anytime soon. More information on these world-class, world-beating vehicles can be found by going to the Jeep brand website today.