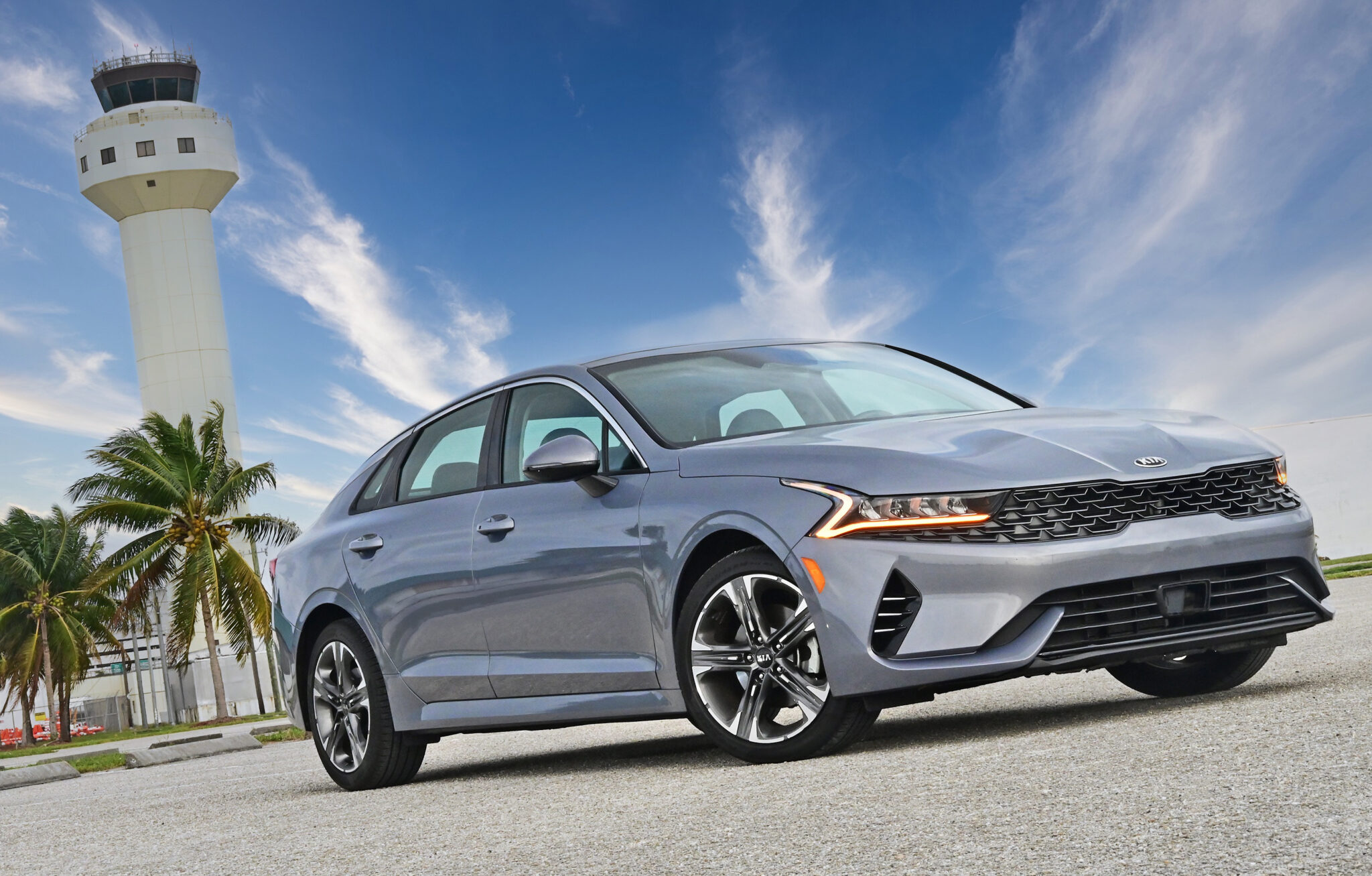 The new 2021 Kia K5 is a new version of a not-so-old favorite, the Kia Optima. The K5 is an updated, totally new design ready to battle against a stout segment of heavyweight industry competitors. These include vehicles like the Toyota Camry, Nissan Altima, Honda Accord, Chevrolet Malibu, Volkswagen Passat and others.

So what does a company do for an encore? They kick the Optima to the Kurb (yes, we did that) and bring the new Kia K5 to market instead. The K5 is a total reimagination of the brand’s midsize flag-bearer. Napleton News had a chance to experience it for a week. Here’s our report.

One could think of the new 2021 Kia K5 as the updated Optima, but they would be totally wrong. Sure the Optima helped to essentially put Kia on the map in the United States, but time runs out for everything, even cars. But fret not young one. The new Kia K5 is well-suited for the task and then some.

The K5 is a four-door, five-passenger sedan that gives buyers a choice of powerplants and trim levels ranging from anything-but-basic LX, LXS, GT Line, EX and the high-performance power of the Kia K5 GT. Napleton News recently had a chance to spend some time with the Kia K5 LXS 1.6T and, except for the naming, came away quite impressed.

Our sample vehicle was powered by Kia’s 1.6-liter turbocharged inline-4 engine, which features gasoline direct injection and produces 180 horsepower and 195 lb-ft of torque. It mates to a conventional 8-speed automatic transmission. According to the EPA, the K5 LXS should achieve 27 city/37 highway mpg.

Kia also offers another engine. This one is exclusive to the K5 GT model and is a 2.5-liter turbocharged inline-4 that delivers 290 horsepower and 311 lb-ft of torque. It’s matched to a Kia-built 8-speed dual-clutch automatic transmission and, with its direct-injected fuel delivery system, capable of a 0-60 run in 5.8 seconds.

Think of the new K5 as a “powerful and angular” style. At least that’s what Kia says. We think it looks like a 7/8ths version of the new Kia Stinger. The nose features Kia’s Tiger face, but we have always seen a shark there instead.

The proportions are perfect with a longish nose and a short tail but don’t let the fastback look fool you. The Kia still manages to swallow lots of luggage and things a typical family may need to haul about.

What about inside the Kia K5?

The interior of the Kia K5 includes a futuristic look at, uh, the future. Chalk that up to the radical infotainment display, which stretches to become part of the gauge binnacle. A T-style shift lever holds sway over the center console, which includes everything a driver needs. Everything is within easy reach, including cupholders, parking brake switch, drive mode selector and seat heat and vent controls. An added plus in our LXS model was the Qi wireless charging to go along with Apple Car Play and Android Auto.

The interior was set off with leather seating and a panoramic sun/moon roof.

Behind the wheel of the Kia K5

We love what the Hyundai Group, comprised of Hyundai, Kia and Genesis are doing lately. What’s that, you ask? Why cranking out gobs of power from tiny little engines, of course! Actually, 1.6-liter isn’t that tiny after all and it’s the same size as the engines used in Formula 1 racing to produce around 900 horsepower. In this case, with 180 hp and 195 lb-ft of torque, it’s not fast like an F1 car, but it is pretty fast for a mainstream passenger sedan.

But it isn’t like that right out of the box. Driving along in normal drive mode, the K5 felt like any other midsize sedan. That could have been an Altima, a Camry. You name it.  But when we flicked the drive mode selector switch into Sport mode, it transformed this Kia into something far better.

Instead of the Plain-Jane feeling you get with other sedans, the Sport mode places the K5 into another place with quick downshifts, rapid acceleration and a good steering feel. It’s not a true sports sedan, but it does manage to make it feel damn close to one.

The Kia K5 is such a good car that makes us question why so many are heading off searching for SUVs instead.