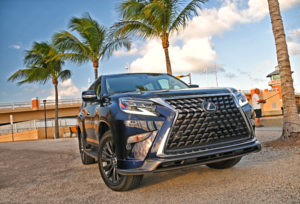 Like a fine wine, the 2020 Lexus GX 460 continues to improve with age. Sure, it’s a throwback and still relies on body-on-frame construction and a naturally-aspirated V8 engine. But even with its generally old-school reputation, this largish SUV still has what it takes. Hang out with Napleton.news as we put the new Lexus GX through its paces.

The 2020 Lexus GX 460 is a five-door, three-row, six or seven-passenger full-size sport utility vehicle (SUV) from the Lexus luxury division of Toyota. As such, it features some rather highfalutin pieces of kit all around that helps it to stand out from similar vehicles on the road.

A reliable 4.6-liter V8 engine powers the GX with 301 horsepower and 329 lb-ft of torque. The engine combines with a six-speed automatic transmission and off-road-tested all-wheel-drive technology to make sure the GX 460 is the most capable seven-passenger SUV on the road today. Additionally, it can tow up to 6,500 pounds.

THE LOOKS FROM OUTSIDE

Outward appearances show the GX 460 has aged well. There are new updates to the spindle-style grille with a 3D look. The sizeable box-like profile remains and though it is not as aerodynamically efficient as some of its swoopier competitors, they can’t go as far afield as the GX 460 can. Meaning that the GX is stout enough to go off-road. Way off-road.

Standard running boards help to ease entry when climbing inside the GX. Getting out might be a different story. And before we continue, this is not just an issue with this vehicle. It seems to crop up in several vehicles that use running boards. The running board steps are handy for getting in but are mostly unnecessary when getting out. Most drivers will step over the running boards and place their feet directly on the ground. The trouble is the running board will hit right at the back of a driver’s pant legs, resulting in dirty pants, more often than not.

The GX 460 interior is largely carryover except with a few minor trim additions. The steering wheel is updated with more intuitive controls. There are extra USB ports throughout, and finally, there is the addition of gray Sapele wood trim with aluminum accents. We did notice there are plenty of buttons for those with a penchant for such.

Our tester featured first and second-row captain’s chairs in addition to the two third-row seats for a total of six passengers. Buyers still have the chance to select the second-row bench seat that expands the seating to seven passengers. Because the Lexus GX is built in Japan, it comes with a native designed rear door that hinges on the right, allowing curbside access when driving on the left side of the road as is customary in Japan and the United Kingdom. For those of us on this side of the pond, it can become a bit of a trial.

As big as it is, the GX 460 doesn’t make you feel as though you are behind the wheel of a big-rig. Instead, we have a refined, well-built and dare we say, elegant large SUV that manages to carry itself nicely. But beware, it does have a high center of gravity. That means it isn’t going to run rings around others at the local track day at your nearby autodrome.

That high center of gravity does have benefits though, which include the ability to go off-road, over logs, through ruts and even in shallow water.

The bottom line is the 2020 Lexus GX 460 will take you nearly everywhere you want to be. Find the nearest Napleton Lexus dealership near you for more information.