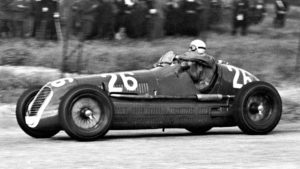 Maserati is celebrating its storied 1940 Targa Florio victory in which a single-seater 4CL model car won the open road endurance race for the fourth consecutive year. The Italian automaker has gone back to Sicily to take a new MC20 prototype to drive on the very same roads its predecessor used to compete in exactly eight decades ago.

As the brainchild of the youngest brother of the original founders, Ernesto Maserati crafted the original 4CL in 1939. This single-seater race car was designed to be competitive in “Voiturette” class racing, and it took only one year for that very same model to take home first place in the historic Targa Florio racing event.

Driven by Gigi Villoresi, the original 4CL won the last race run in Italy and Europe before the Second World War, a result that confirmed the Modena-based constructor’s supremacy.

Flash forward to 2020, and Maserati made some noticeable changes with its new MC20 concept.

“The new super car’s development thus proceeds with tests in different conditions of use, with the aim of gathering data and information for the final fine-tuning.,” according to a Maserati press release. “After the first batch of tests performed using the dynamic simulator at the Maserati Innovation Lab in Modena, the time has now come for road and circuit test drives.”

Maserati claims that the new MC20 will officially be launched in September with the intention of entering competitive racing events. This newly designed model is a callback to the Italian sports car’s past with quite a few modern engineering upgrades. The latest Maserati model to win a racing event was the MC12 in 2010.

With the MC20 scheduled to arrive later in the year, the announcement serves as the beginning of a new era for Maserati racing vehicles. The first prototype leads us to believe that there will be changes to the styling, technology, and engines since Maserati has made the decision to craft all components of the vehicles in-house.