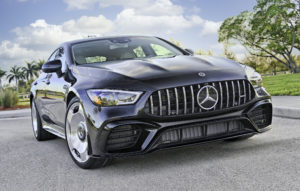 Shortness of breath was the feeling we had after standing on the skinny pedal of our Mercedes-AMG GT 63 S. In other words, this is a ride that takes our breath away. And for good reason. This is the ultimate road-going lead-sled from Mercedes-AMG and truth be told, the other German brands should be quaking in their boots.

The 2020 GT 63 S is a totally new ride that is based not on the Mercedes-AMG GT two-seater but instead on the Mercedes-AMG E63 Station Wagon. Unlike the station wagon, with its crisp cutlines and sharply-creased side panels, the GT 63 S is a fluid, Das Boot-like structure with a characterization that some have described as a great white shark. We at Napleton.news guess we’ll need a bigger boat.

The GT 63 S is a four-door, four-passenger executive sedan that thinks it’s a coupe. At least that’s what Mercedes-Benz would like you to believe. It could be a hatchback, too, what with its lifting tailgate that pops up with the sweep of a foot underneath the rear bumper. But above all, it’s a sports grand tourer that’s loaded with luxury. And let us not forget performance.

For example, where else would you find a gaping front end that looks like it was inspired by the  Mercedes 300 SL Gull-Wing Carrera Panamericana race car. Or a twin-turbocharged 4.0-liter eight-cylinder Biturbo engine that produces 630 horsepower and 664 lb-ft of torque? Or a 9-speed AMG-Speedshift automatic transmission calibrated to within an inch of its life, according to AMG standards.

And we’re just getting started.

There’s also the well-known AMG 4MATIC all-wheel-drive system with steerable rear wheels shod in 21-inch Michelin Pilot Sport Cup 2 tires. These help to minimize the turning radius, wherever possible. And there’s drift mode. What’s drift mode, you ask? Think Fast and Furious, where you throw the power from all-wheel to rear-wheel-drive mode for some real hoonigan-like (Google it) tail wagging on a wide-opened course, of course. In that case, we recommend your last name be Michelin so you could get all the replacement tires ($570 each) you need at cost.

WHAT’S IT LIKE INSIDE THE MERCEDES-BENZ AMG GT 63 S?

Totally civilized, this Merc coddles us like few other vehicles. It has four personalized bucket seats that are loaded with creature comforts like dynamically contoured front seats that gently grab you to hold you in place as you thread your way through the field on your way to the front of the pack. Oh, did we mentioned they are heated and air-conditioned, too?

Those in the back are almost as fortunate, with their heated rear seats. This pair of chairs, which will accommodate passengers up to six-feet tall, can also fold forward to carry extended items like snow skis or fishing rods, among other things.

The dashboard has almost as many flat-screen displays as your local Best Buy store. We’re exaggerating, of course, but when you put them side-by-side, they stretch nearly two-thirds of the way across the interior width. The display directly in front of the driver features all pertinent details to the operation of the vehicle, while the central screen features climate, telephone, radio, media and navigation controls.

And for those stressful days where you find yourself cruising through South Florida or along the way from Rochester, Minnesota to Milwaukee and then the Chicago suburbs, relax, literally via the warm and vigorous Shiatsu Massage functions. If it gets too warm, just touch the ventilated seats to help cool things down.

During our week with the Mercedes-AMG GT 63 S, we were struck by how many people just came forward for a closer look. That usually resulted in a question and answer session where I recited the stats and specifications, the zero-to-60 times, and the cost of the vehicle as they saw it right that very moment.

Truthfully, there is a lot to take in.

The GT 63’s fluid-like looks begin with a long hood that leads to a swoopy, yet robust cabin that finishes with a short-tail hatchback for a sense of design with purpose. Two wide rear fenders that resemble hips add to the visual length of the GT 63 S. A tail spoiler stands on two pylons and actually does provide downforce above a certain speed. We think that’s the reason it occasionally whistles when cruising at speeds above 80 mph.

Getting behind the wheel of the AMG GT 63 S is an experience that feels surprisingly like any other Mercedes vehicle. Think of the Mercedes-Benz S 550 or the E-Class sedan. Adjust the seats, buckle in and fire up the push-button start. An aggressive gurgle is first heard, followed by an engine that rumbles as we back out of the drive.

Shift the fly-by-wire gear selector to the proper gear, place the drive mode selector in sport and listen as the 4.0-liter V8 offers a rumble and pop each time it bangs through one of the gears in the nine-speed automatic transmission. Finally, we head onto the interstate and gently tap the accelerator. What happens next is, as we described above, truly breathtaking. Sixty miles-per-hour comes on in 2.9 seconds, which is firmly in supercar territory. Remember, this is a sedan, er, coupe.

This Mercedes-AMG GT 63 S is not just about straight-line speed either. With the sophisticated rear-wheel-steering system, 4MATIC all-wheel-drive and AMG Sport Suspension, it does equally well on the twisties, too. In fact, this sled will have you seeking only the longest routes to your home after a long day of work.