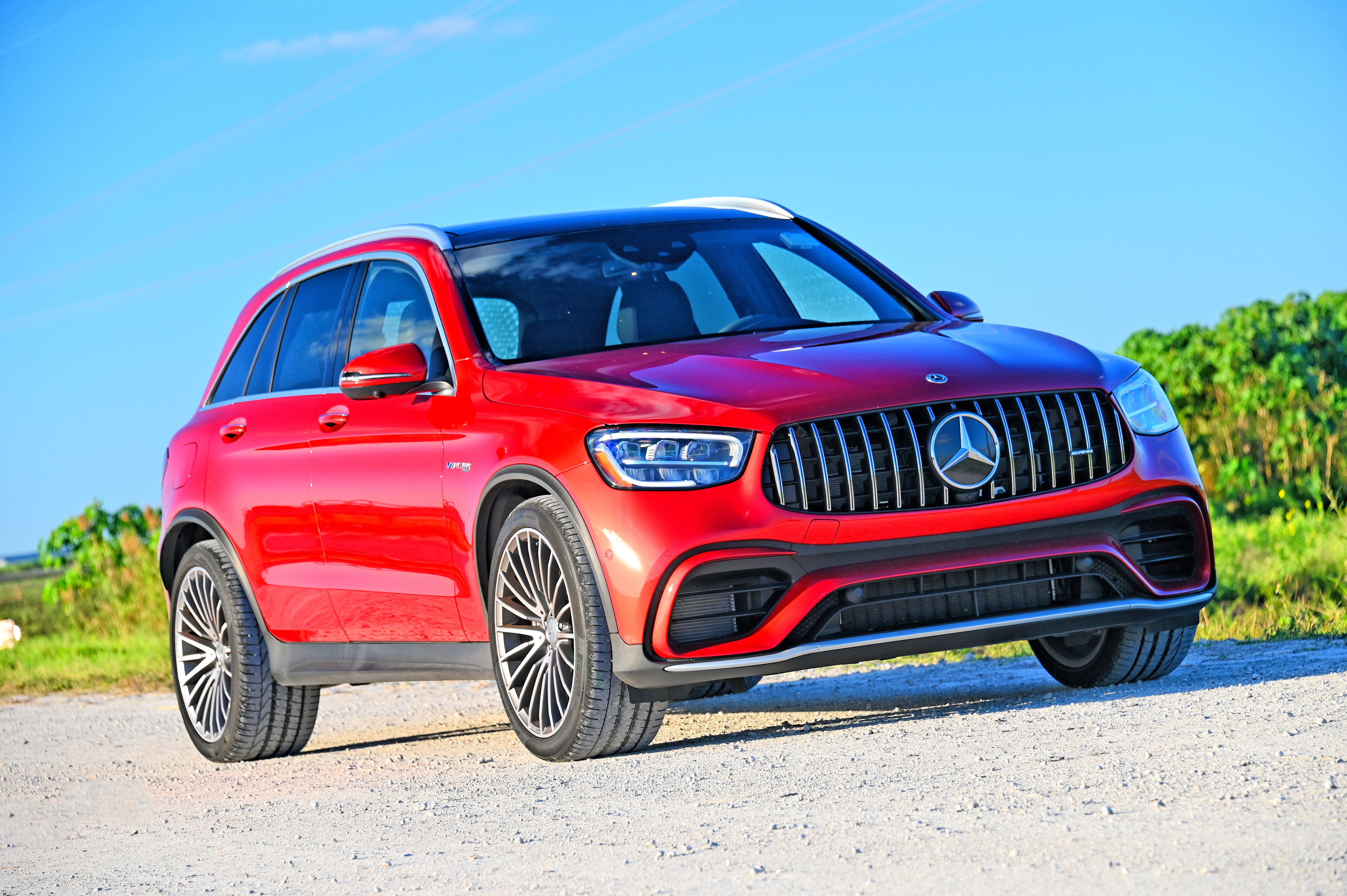 Those wacky kids at AMG in Affalterbach, Germany! Quite the practical jokers, they decided to race prep a GLC and call it the 2020 AMG GLC 63 SUV. We know it looks like a code or password to access your Google account, but in reality, it says you are driving a very swift Sport Utility Vehicle. And this may be the future of sedans if they continue to take a back seat to Sport Utes and Crossovers.

But just what is this hot-rod SUV?

The AMG GLC 63 SUV started as the standard Mercedes-Benz GLC SUV, but we think mechanics snatched it from the Bremen, Germany, assembly line before it had a chance to receive its standard M-B engine. In its place is a hand-built AMG powerplant, assembled by a master engine-builder, which reinforces the message of the AMG motto, one man, one engine.

BUT THAT’S NOT ALL.

The GLC 63 is available in two body configurations, which include a conventional SUV station wagon-style body and a four-door fastback AMG GLC 63 Coupe. Both are substantially similar vehicles except for the swept-back roofline. For these driving impressions, we will hold to the SUV version of the GLC.

The GLC 63’s interior is top shelf Mercedes fare as you have come to expect. Still, there are specific AMG touches that help to move it a step further. They include a D-shaped AMG steering wheel, AMG Pedals, controls and other badging throughout the cabin.

The interior is wrapped with enough leather to stock a Nordstrom Shoe Department. Add in the subtle detailing of single needle stitching and you’ll have an interior that is as functional as it is distinctive. The Mercedes-Benz User Experience (MBUX) is on-board to help with navigation input and other actions that can be accomplished simply through touch on the haptic pad on the center console. Black ash wood trim helped to “class up the joint” rather than the overdone use of carbon fiber inserts.

Finally, the Mercedes AMG GLC 63 SUV features 17.6 cubic feet of cargo space behind the rear seat. Fold that forward in its 40:20:40 mode, and that space grows to 40.6-cubic feet, which should be good for a few bags of groceries.

The AMG GLC 63 SUV gets its motivation from a 4.0-liter twin-turbocharged V8 engine making 469 horsepower and 479 lb-ft of torque between 1,750-4,500 rpm. Innovative in its design, it includes exciting engineering that has placed the turbochargers in the valley between cylinder heads. This helps the engine to perform cooler and produce more power.

Power from the engine is delivered to the 4Matic all-wheel-drive system by a specially-modified AMG Speedshift MCT 9-speed transmission, beefed up to handle the extra torque of this thoroughbred engine.

The 4.0-liter V8 is assembled in AMG headquarters in Alfalterbach. Here, master artisans work at their individual workstations and assemble these engines using jewel-like precision. There’s no assembly line, as these craftspeople build each powerplant one at a time from the ground up. When finished, the engine builder places an AMG badge directly on top of the engine that is complete with his or her signature. It’s as though Picasso was signing one of his masterworks.

BEHIND THE WHEEL of the Mercedes AMG GLC 63

With the push of the ignition button, the V8 rumbles to life. If that’s not enough rumble, push the exhaust baffle button to the right of the MBUX unit for a throatier growl. While you are at it, push the adjacent button to disable the Auto Start / Stop button, as well.

Announcing its presence with authority, the AMG GLC 63 SUV builds with a thunderous reverberation that would sound NASCAR-like if you didn’t know better. But more than the sound is the fury. This SUV is quick, with nearly 470 horses under the hood. Sixty miles per hour ticks off in 3.8 seconds. The quick-shifting AMG Speedshift automatic transmission bangs through the nine gears effortlessly, yielding nothing but power and speed.

The AMG Dynamic Select controls on the center console let us go from Normal to Sport and Sport+ mode. Each of these changes the vehicle dynamics just a bit further. The GLC 63’s Sport Suspension includes Air Body Control that continually adjusts the ride according to sensor readings that occur thousands of times in a second.

The surprising thing is that although this Sport Utility Vehicle is a bigger vehicle than most sedans. But there’s something different about this: It thinks it’s a sedan. Or at least it handles like one. Here at Napleton.news, we have driven many and this is one of the most agile beasts we’ve had a chance to wheel. It rides in a hunkered-down fashion, low slung to the ground, and easy to maneuver and cut corners. With all-season performance tires, it managed to stick like glue while entering and exiting a turn.

Let’s cut to the chase. We are so chuffed about the AMG GLC 63 SUV. It’s a Sport Utility Vehicle that thinks that it’s a sports car instead. Call our AMG specialists at Napleton’s Mercedes of Rochester, MN, for more information today.