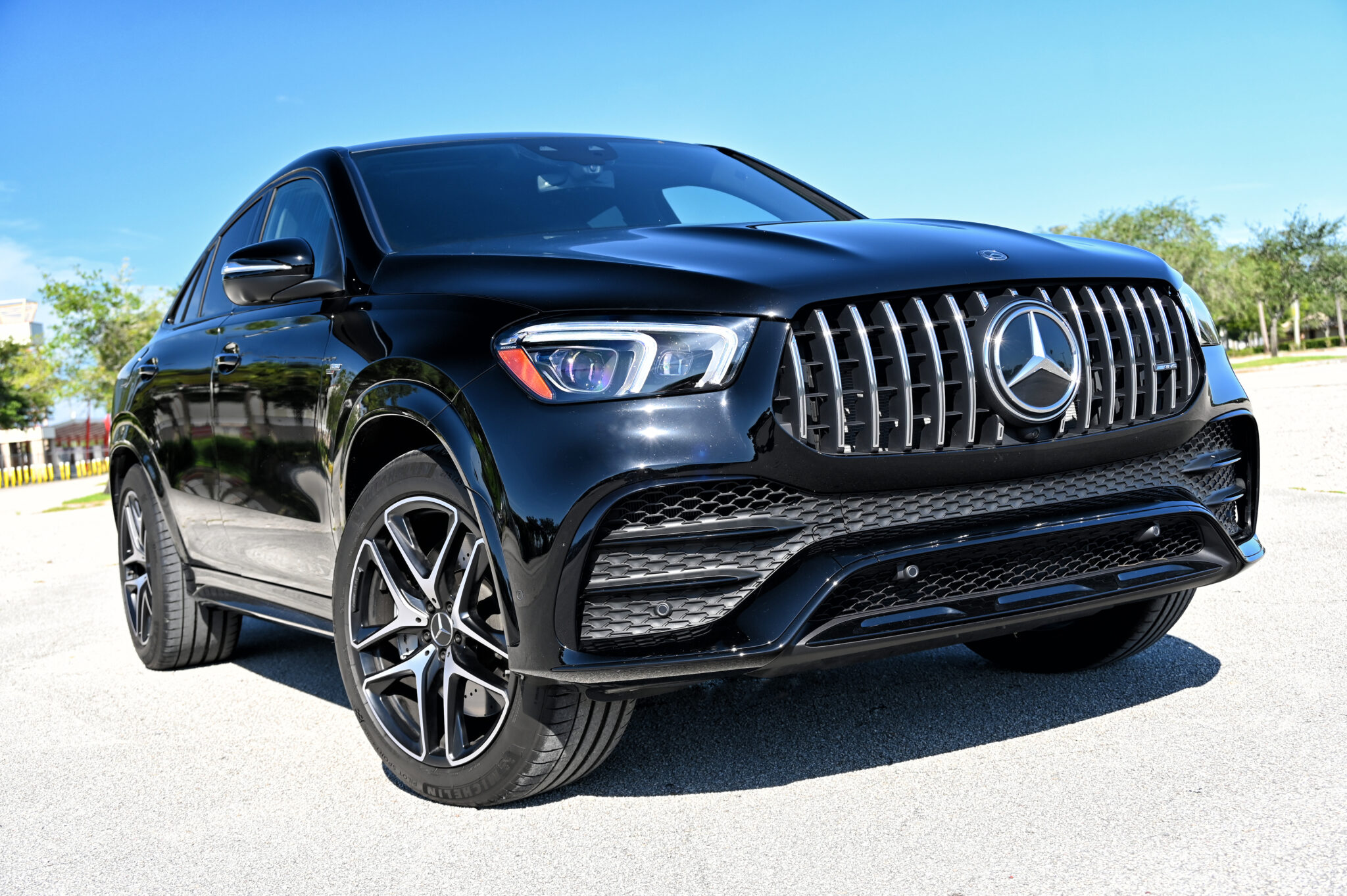 Smack in the middle of the Mercedes AMG Lineup, the new Mercedes AMG GLE53 Coupe is the “just right” version of their E-Class-based SUV. This one, which features the Coupe (also known as the fastback) body style, is the high-performance AMG version. It’s fresh from the hills of Affalterbach, by way of some backroads leading from Vance, Alabama, USA.

It’s an odd look, this fastback style of SUV. While not floating everyone’s boat, it still offers a sporty look to what would otherwise be as visually pleasing as a side-by-side refrigerator. Napleton.news had a chance to hot rod this AMG bad boy around for the past week. Read on to hear what we think!

WHAT IS THE MERCEDES AMG GLE53 COUPE?

The Mercedes AMG GLE53 Coupe is a fastback version of normally boxy GLE SUV. As it lays, it’s a four-door Crossover vehicle with a hatchback. Sure, rear-seat headroom may be a slight bit less than the traditional GLE vehicle, but this one is visually much more exciting than the traditional two-box design found on most traditional SUVs.

While the standard GLE uses a turbocharged 255 horsepower 2.0-liter four-cylinder, and the top dog AMG GLE63, has a 4.0-liter twin-turbo V8, the mid-level Mercedes AMG GLE53 Coupe is powered by a stout AMG-enhanced 3.0-liter turbocharged inline six-cylinder engine with EQ Boost that produces 429 horsepower and 384 lb-ft of torque. The EQ Boost is a 48-volt motor-generator that powers an electric supercharger to help feed boost before the turbocharger kicks in. Similar to the technology found in the World Championship Mercedes AMG Petronas Formula 1 racecar, the hybrid/supercharger/ turbocharger combo boosts the low-end RPMs enough to launch the GLE with gusto.

Power from the 3.0-liter straight-six engine is dispersed to all four wheels by the AMG Speedshift TCT 9-speed automatic transmission.

Like all AMG vehicles sold in North America, the Mercedes AMG GLE53 Coupe traction is delivered by the AMG brand’s Performance 4Matic all-wheel-drive system. The vehicle rides on the AMG Ride Control Airmatic Suspension that offers on-the-fly changes that harden or soften the ride according to the way sensors “read the road.”

HOW DOES THE MERCEDES-AMG GLE 53 COUPE LOOK?

If you were to look at the AMG GLE53 from the windshield forward, you would have the same front clip as that found on the regular GLE. From the windshield rearward, it’s a different story. Honestly, we like the look of the Coupe better than the regular version but do so with the knowledge that you are giving up a bit of extra cargo capacity when opting for this model. The front grille includes the cascading waterfall feature, as found on the old Mercedes Carrera Panamericana race cars from the 1950s. There is a massive under-bumper intake to help keep the engine cool, and an elegant coupe-like appearance that says this sled is a power-user. Somewhat.

The rather high slab sides of the GLE53 are tall and lend themselves to the overall massiveness of the vehicle. Big meaty tires offset that look. At the rear, a duck’s bottom look at the rear valance is reminiscent of other vehicles in the Mercedes portfolio, all the way up to the decklid spoiler.

The inside of the AMG GLE53 is all about the best that Mercedes offers. Like their corporate motto, “the best or nothing,” it doesn’t get much better than this.

Start with a sheet of glass extending across 24.6 inches of the dashboard. It’s actually two panels of 12.3 inches each but measured across the entire surface area, you get a full 24 inches and then some. The display directly in front of the driver is good for all the typical gauges that we have become accustomed to. They are configurable and change according to the drive mode the GLE is in. The glass panel over the center console operates the audio, navigation, cellular, vehicle systems, climate controls and more. They can be operated by the touchscreen display itself, the control knob on the center console, or the redundant controls on the steering wheel. Talk about a three-way control of the glass cockpit-The Mercedes AMG GLE Coupe lets you have it all.

Black MB-Tex synthetic leather-covered our AMG sport seats and offered supreme comfort throughout our daily excursions in the vehicle. The interior was offset by red stitching throughout the vehicle, along with red boy-racer seatbelts for that noted hint of aggression.

The center console included a pair of sissy-bars to grab onto when negotiating a tight turn. In the rear, the Mercedes AMG GLE53 coupe is capable of carrying 23 cubic feet behind the 2nd-row seats. Fold them forward, and you’ll achieve 60.7 cubic feet of total cargo space.

BEHIND THE WHEEL OF THE MERCEDES GLE53.

The 3.0-liter straight-six is silky-smooth at start-up, which comes easily with the push of a button. At that point, your senses are directed rearward to the gurgling sounds of the AMG performance exhaust system that lets you know this is not a run-of-the-mill Mercedes grocery-getter.

Power from the straight-six is assisted by the 48-volt motor-generator that helps get it off the line nicely and manages to keep pushing through gear changes and during bouts of momentary turbo lag. The result is smooth, constant acceleration unless you choose to let up on the skinny pedal.  Gear changes are almost unnoticeable from the 9-speed automatic, and that’s just what we expect in a car like this.

The power from the engine is like a sugar rush that doesn’t end. Well, it does, unfortunately, around 112 mph. Handling is impressive, too, considering the overall size and weight of the GLE. Pressing hard into the corners finds a Crossover that doesn’t have that tippy crossover feel.

The Mercedes AMG GLE53 Coupe is the perfect antidote to the SUV. It’s sexy, swept-back, sensual, and did we say swept-back? Oh, we did! It’s just the car for a pair to travel cross-country in. Pack in, Buckle up and let’s go.