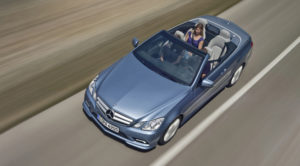 The Mercedes-Benz E-Class is the name of one of the brand’s most important car lines. Introduced as a line of Executive Cars in 1993, they are the mid-range anchor of the M-B lineup and are now in their fifth generation.

The “E” in E-Class has been around for a while, and was at one point, a suffix in the model name. For example, 300E denoted a 3.0-liter Einspritzmotor (German for fuel injection engine). Today, the E precedes the number, as in E550, and stands for much more. But seriously, the kids at Napleton.news like saying Einspritzmotor!

A statuesque vehicle, regardless of its flavor, the Mercedes-Benz E-Class has turned heads since 1993. Loaded with safety features and designed for long-haul comfort, the lineup offers coupes and cabriolets that offer the classic cache of a personal sports car. Sure, there is room for a family inside, but the E-Class excels even when carrying just two passengers.

Since 1993, when Mercedes-Benz first designated this mid-range lineup of vehicles as E-Class models, there was always a range-topping version powered by Mercedes-AMG engines. One spectacular example was the Mercedes-Benz 300 CE 6.0 AMG, known affectionately as “the Hammer.”

They were speed-demons from the start. Tested by the company on the famed Hockenheimring racecourse, the cars were clocked at 124 mph, which was an amazing feat for passenger cars at the time.

REFINEMENTS INSIDE AS WELL

The refinements were not just under the hood. They were found in the E-Class interiors, as well. Using fine wood veneers in the instrument panel, with high-grade carpeting underfoot, helped to raise the stature of the E-Class vehicles. So impressed were the editors of the German enthusiast magazine “Auto Motor Und Sport,” who said, “the coupe also provides the level of comfort missing from the sedan. A touch of luxury is offered in a functional package at an acceptable price.”

Although visually similar to their sedan counterparts, the coupes were described as having “unmistakable character” that was clearly more independent than their predecessors. For example, the coupes and cabs featured a swept-back windshield and a rear window that was more inclined. Add to that a body that sat nearly 2.0-inches lower than the sedan for a more hunkered-down, enthusiastic feeling.

In 1991, Mercedes-Benz introduced the Cabriolet version of the E-Class coupe and it has gone on to become a modern-day classic. In addition to being eligible for vintage car certification at this time, they were loaded by M-B engineers with loads of passive safety features, including strengthened A-Pillars, longitudinal members and doors made of high-strength steel.

Designed to create a link between topless motoring and the strength and depth of the brand, the Mercedes-Benz E-Class cabriolet was the first cloth top for the brand in nearly 20 years. Engineers started by strengthening the structure of the vehicle, with a redesign of nearly 1,000 parts.

In 1993, the E 36 AMG coupe and cabriolets hit the scene, immediately starting an emotional tradition that continues to this day.

THE MODERN MERCEDES-BENZ COUPE AND CABRIOLET

The new, modern Mercedes-Benz E-Class Coupe and Cabriolet lineup were introduced at the 2017 North American International Auto Show in Detroit and followed by the Geneva Motor Show, respectively. This selection of vehicles with unmistakable “Sporting Elegance” is busy writing the next chapter of the Mercedes-Benz success story.

The E-Class coupes are available with engines ranging from turbocharged four-cylinders to Biturbo V6 models. For those who feel too much is never enough, there are the Mercedes factory hot-rods known as the Mercedes-AMG E63 Coupe and Cabriolet. Joining together with E63 Sedan, it’s just another example of “The Best or Nothing.”