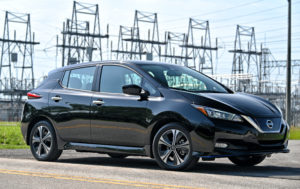 Next to Tesla, the 2020 Nissan Leaf SV Plus is the latest in the longest production electric vehicle on the road today. Now celebrating its 10th Anniversary, it continues to get better and may be the perfect zero-emission vehicle for your current lifestyle. And no, it doesn’t need a really long extension cord.

Napleton.news had the chance to plug-in and buckle up with one of the most popular EVs in existence. How was it? Hop in, and ride along to see for yourself.

WHAT IS THE NISSAN LEAF SV PLUS?

The Nissan LEAF SV Plus is the latest in a long line of electric vehicles from Nissan. There are several models within the lineup, but the LEAF SV Plus has a mileage range of 226 miles per charge. It is a four-door, five-passenger hatchback, but let’s be realistic here: If you are even remotely built like a squad of high school football linebackers, you’re only getting four passengers inside! That’s just the nature of the beast and the wishful thinking of Nissan’s interior design team.

Power for the standard Nissan LEAF comes from a 110-kW electric motor paired with a 40-kWh lithium-ion battery pack. Our Nissan LEAF SV is equipped with a 160-kW electric motor and a 62-kWh battery pack. This combination provides the equivalent of 214 horsepower from a traditional gas-powered vehicle. Depending on how heavy your right foot is, combined with the outside temperatures of the season, you should get around 150 or 226 miles, respectively.

Charge times vary according to your charger, and the LEAF itself. A standard 110-volt outlet requires about 20 hours of trickle charging. A 220-volt Level 2 charger cuts that time to around eight hours. Using a 50 kWh fast charger, the charge time can be shortened further to one hour.

The concept of an electric vehicle that can now close in on the near 250 mileage range would have been unheard of when EVs first started appearing on the road. Napleton.news remembers when we were invited to test drive the very first Nissan Leaf vehicles at the company’s US headquarters outside of Nashville, TN. At that time, an electric car was a bit of a novelty and many would struggle to go over 100 miles on a single battery charge. As we approached 80 miles of distance that we had already driven, we’d get that nervous feeling in the pit of our stomach, caused by the dreaded “Range Anxiety.”

That was back in 2010. Thanks to the latest in battery and charging technologies, we flash forward ten years to find range anxiety has largely become a thing of the past.

At first glance, the Nissan LEAF SV Plus has that futuristic style that was seemingly created by General Motors EV-1, which was made from 1996 to 1999. It is long gone now, but its curvy look and Jetsons-like ethos paved the way for future EVs, including the Nissan LEAF SV Plus. In this case, it bears a family resemblance to the Nissan Murano, and other vehicles in the lineup, starting with its V-Motion grille and winding its way back to the faux floating roof thanks to the blacked-out C-pillar.

There are ground-effects all around, with aerodynamic alloy wheels and boomerang taillights that were inspired by the 370Z sportscar. Various creases wind their way around the LEAF, starting from the hood, which, trust us, you will never need to lift for any user-serviceable maintenance.

The Nissan LEAF is available in five styles ranging from S, SV, S Plus, SV Plus and SL Plus trim levels. SV and above models include a quick-charge port, and features like Adaptive Cruise Control, NissanConnect with Navigation, while SL and above include ProPilot Assist, a 62 kWh battery and a seven-speaker Bose audio system.

AND INSIDE THE LEAF?

We found the LEAF’s interior rather tidy for such a space-aged looking vehicle. This included very supportive 8-way power-adjustable cloth-covered seats and a full array of buttons and touchscreen controls. The displays, which include a new 8-inch touchscreen, show range, battery levels and outside temperatures. There’s also 3D navigation, Bluetooth, Apple CarPlay and Android Auto to assist with smartphone connectivity.

The rear seat is, as stated before, more suitable for two, rather than three passengers. There is plenty of cargo space in the “Wayback,” but the second-row seats don’t fold down flatly. As a result, it may not be as easy to load large items during a Home Depot, or Target Superstore run.

BEHIND THE WHEEL OF THE NISSAN LEAF SV PLUS

If you have long been thinking of going all-in on an electric car, the new Nissan LEAF could be your jumping-off place. With the extended range of this latest version, it manages to get rid of the range anxiety present in past versions. What you now have is an electric vehicle that you can truly live with.

But just how liveable is it? How does instant torque excite you? What about the ability to pass slower-moving traffic with just an instant stab of the accelerator? Or the ability to regenerate battery charge by using the e-Pedal? With the LEAF SV Plus, you get all this and more.

There is no hint of engine noise, nor the whir or other sounds that used to exist with electric vehicles. Except for the futuristic pedestrian warning tones during back-up or driving at low speeds, the LEAF is almost silent.

But that doesn’t mean it doesn’t have the goods. Quite contrary, the new LEAF feels much more like a “complete” car. Thanks to the lower center of gravity from larger, heavier batteries, the feeling behind the wheel of the LEAF SV Plus is one of substance. That’s right! It’s a substantial riding car that feels more traditional than any LEAF before it.

To find out more about this electric slot car for the street, please contact the LEAF specialists at Napleton Nissan in St. Louis, MO, today!