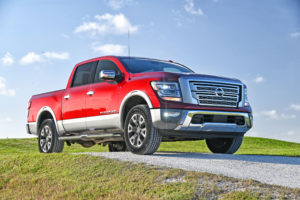 Redesigned for the 2020 model year, the Nissan Titan Crew Cab pickup is a new look at a familiar, and very capable “heavy hauler” of the Nissan brand. But is it what’s needed for the road today? We spent a week with the Titan and found it to be quite the operator.

For 2020, the new Nissan Titan Crew Cab has been sent to the spa for a “major mid-cycle refresh.” That typically means that under the skin, the truck remains the same. It’s on the interior and exterior and the addition of new technology and safety features where things have changed. Take a look, as we did, to find what’s new.

The 2020 Titan is available as a King Cab with a 6.5-foot bed or in Crew Cab size with a 5.5-foot box. Both trucks can come with Rear- or All-wheel-drive. The Titan base model is the Titan S. Next is the Titan SL, which comes with the possibility of a load of options.

The first thing we noticed was the Titan’s new headlights with Linear LED accents. These new headlights are more powerful, yet produce reduced glare for cars and trucks approaching from the other lane. They are joined by a unique array of LED fog lamps.

Oh, we almost forgot: Our Titan has a Fender. Of course, it does, you say. No, we’re talking about a Fender audio system, from the same people who brought you the Telecaster guitar. If you have read other articles in napleton.news, you’ll know it’s one of our favorite brands.

On the safety side, the Nissan Titan is now standard with Nissan’s Safety Shield 360 safety suite. A package being rolled out with the introduction of all new Nissan cars, trucks and SUVs, it includes Auto Emergency Braking, Rear Cross Traffic Alert, Rear Auto Braking, High-beam assist, Blind-spot warning system and lane-departure warning. Our Platinum also included the 360-degree Around-View Monitor.

The Nissan Titan Crew Cab is offered with a single engine: A direct-injection 5.6-liter Endurance V8 producing 400 horsepower @ 5,800 rpm and 413 lb-ft @ 4,000 rpm of torque. That’s a best-in-class effort for standard powerplants. Retuned for 2020, the 5.6-liter is essentially a carry-over version from the 2019 model but was dynamometer-rated using premium fuel. How’s that for a minimal-cost power boost?

Inside the engine is Nissan’s VVEL (Variable Valve Event & Lift), which combines hydraulic variable valve timing with electronic variable valve lift for high performance and “crisp response,” according to Nissan. That V8 is now connected to a nine-speed automatic transmission providing more torque at the wheels than was available using the previous seven-speed gearbox.

WITH PLATINUM RESERVE 4X4 IS STANDARD

Although our Platinum Reserve tester was equipped standard with full-time four-wheel-drive, others in the line-up can be had with a buyer’s choice of standard rear-wheel drive for those times that front-drive isn’t necessary. Standard with any version are features like Vehicle Dynamics Control (VDC), Traction Control System (TCS) and Hill Start Assist (HSA). Ours included Hill Descent Control (HDC), which is also included on the Titan Pro-4X.

For those times you want to get dirty, the Nissan Titan Crew Cab is equipped with an enhanced Off-Road gauge that displays the Titan’s wheel angle when rock crawling and negotiating road obstacles. It’s a trick piece of kit that just adds more value to the entire package.

When properly equipped, there’s a maximum towing capacity of 9,370 pounds and a maximum cargo bed payload of 1,680 pounds.

The new 5.6-liter engine offers a sense of refinement that makes the Nissan Titan feel as though it were an SUV rather than a work truck. Acceleration was there for the taking, made easier by the new nine-speed automatic transmission. We didn’t have anything to tow but have read reports that it’s an effortless deal when wheeling this brute.

The lane departure warning system did its part with a vibration on the wheel when you neared the edge of your lane. It was much more subtle and dare we say effective than the loud screeching sound that other brands are using. We can only take jumping out of our skin once a month or so if you know what we mean.

Overall, we enjoyed our time in the Nissan Titan Crew Cab. We weren’t expecting to like it as much as we did, especially on a long-haul drive from Florida’s East to West Coast. When you combine the overall feel of refinement and solitude in the cabin, with the Titan’s overall capabilities, you’ll quickly begin to like it too.

The new Nissan Titan Crew Cab is available at Napleton’s Nissan of St. Louis, where our Titan experts can help you select the perfect model for your needs.