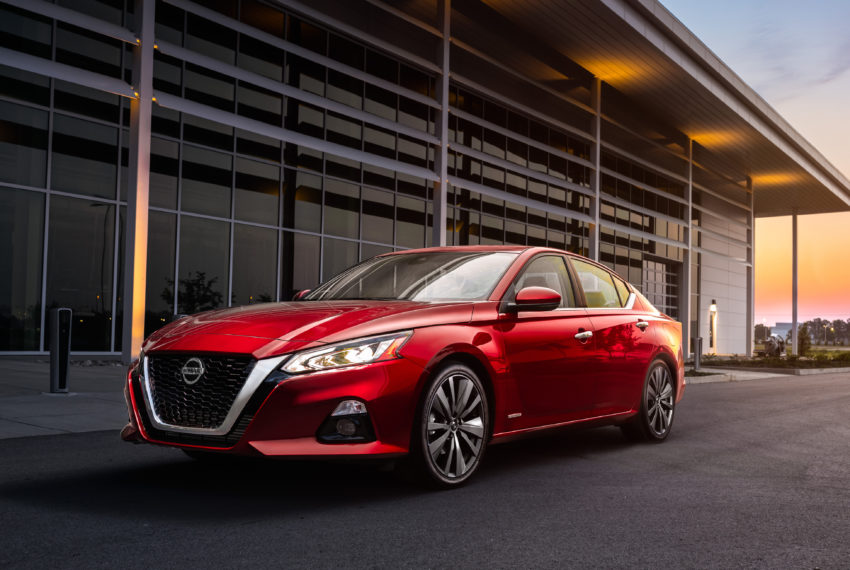 The Nissan Altima Sedan enters the second year following its refresh in 2019. Comfortable and roomy enough for five passengers, it has been updated for a segment that is rife with fierce competitors. So it better come loaded for bear.

We at Napleton.news, had a chance to test out the 2020 Nissan Altima 2.0 Platinum FWD Sedan VC-Turbo, recently and came away impressed with what Nissan has brought to market. But we will say in the most robust possible way that Nissan better stay sharp, lest their competitors eat their lunch. It can happen at a moment’s notice and in this dog-eat-dog automotive world, it is almost a certainty.

WHAT IS THE NISSAN ALTIMA?

The 2020 Nissan Altima sedan is a four-door, five-passenger midsize sedan that went through a redesign in 2019. Along the way, it received Automobile Magazine’s Automotive All-Stars award. It is sporty in appearance, handsome in design and peppy in spirit.

Since our model was the front-wheel-drive (FWD) version rather than the available AWD model, we wouldn’t get that grippy feeling from all four wheels as we rounded the curves on our super-secret test route. But that would be okay.

Instead, what we got was a handsome looking sedan complete with the V-Motion grille design that has become ubiquitous throughout the line. There are boomerang shapes all over the Altima, reminiscent of the designs found on the Nissan 370-Z models, but here, they don’t look as exaggerated. The new headlamps are well-designed into the overall front fascia. Nissan, thankfully, has designed a sedan where every part has an actual function. There are no fake intakes or splitters here.

The Nissan Altima is available in base S, SV, SL, SR and Platinum models.

The interior of the new Nissan Altima is a study in high-quality materials with the occasional smattering of hard plastics liberally sprinkled about. Simply done and done well. There are only two interior color choices, black and grey, this time out. That’s okay but may cause a bit of disappointment for those with a pigment fetish.

Seating was stellar, thanks to the Altima’s Zero Gravity seating design. To our backsides, it turned out to be one of the most comfortable sets of chairs in the automotive industry. Seat height adjustment might present a bit of a challenge to those who have trouble getting up from low-mounted chairs. We think the design was a bit much at times and it turns out others had similar feelings about them.

The rear seating area displayed tons (TONS!) of legroom with enough space to place an average-sized basketball on the rear floor area. Behind the fold-down rear seats are 15.4 cubic feet of cargo space in the trunk. Overall, it’s a smaller space than some competitors, but it still will fit the bill.

Finally, our Platinum tester included a 2.0-liter 4-cylinder turbocharged (Variable Compression Turbo or VC Turbo for short.) This engine serves as a replacement for the dearly departed 3.5-liter V6 engine and makes 248 horsepower and 273 lb-ft of torque.

All engines mate to Nissan’s Continuously Variable Transmission (CVT), which is tweaked to provide the feel of a gearbox that actually shifts gears.

BEHIND THE WHEEL OF THE ALTIMA PLATINUM

After a push of the button to start the Nissan Altima, the 2.0-liter four-banger purrs to life. Part of that purr comes as a result of Nissan’s active noise cancellation in its interior. Backing out of the driveway activates the rearview camera, which is a now-mandated relief that seems to come in handy on a dew-soaked South Florida morning. Shifting into Drive is as straightforward as it gets, as the Altima has a linear gate that goes from P R N D L, just like in the olden days.

Acceleration was quick and even satisfying getting off the line, even displaying a touch of torque steer as the front-wheel-drive system sought its grip on the morning pavement. Once sorted, the Altima settles in for a well-modulated drive experience, with decent road manners while underway.

RELAXING RIDE OF THE NISSAN ALTIMA

The ride is relaxed, and the zero-gravity seats are awesomely comfortable for the long haul, as we found during one three-hour-long trek across the state. We usually try to space out a drive with a quick walk-around bathroom break as needed. But making the trip in this new Altima seemed to make such a stop unnecessary. That shows the real comfort of this new Altima.

For more information on the newest in the Nissan fleet of sedans, coupes, SUVs and trucks, contact the Nissan experts at Napleton St. Louis Nissan.