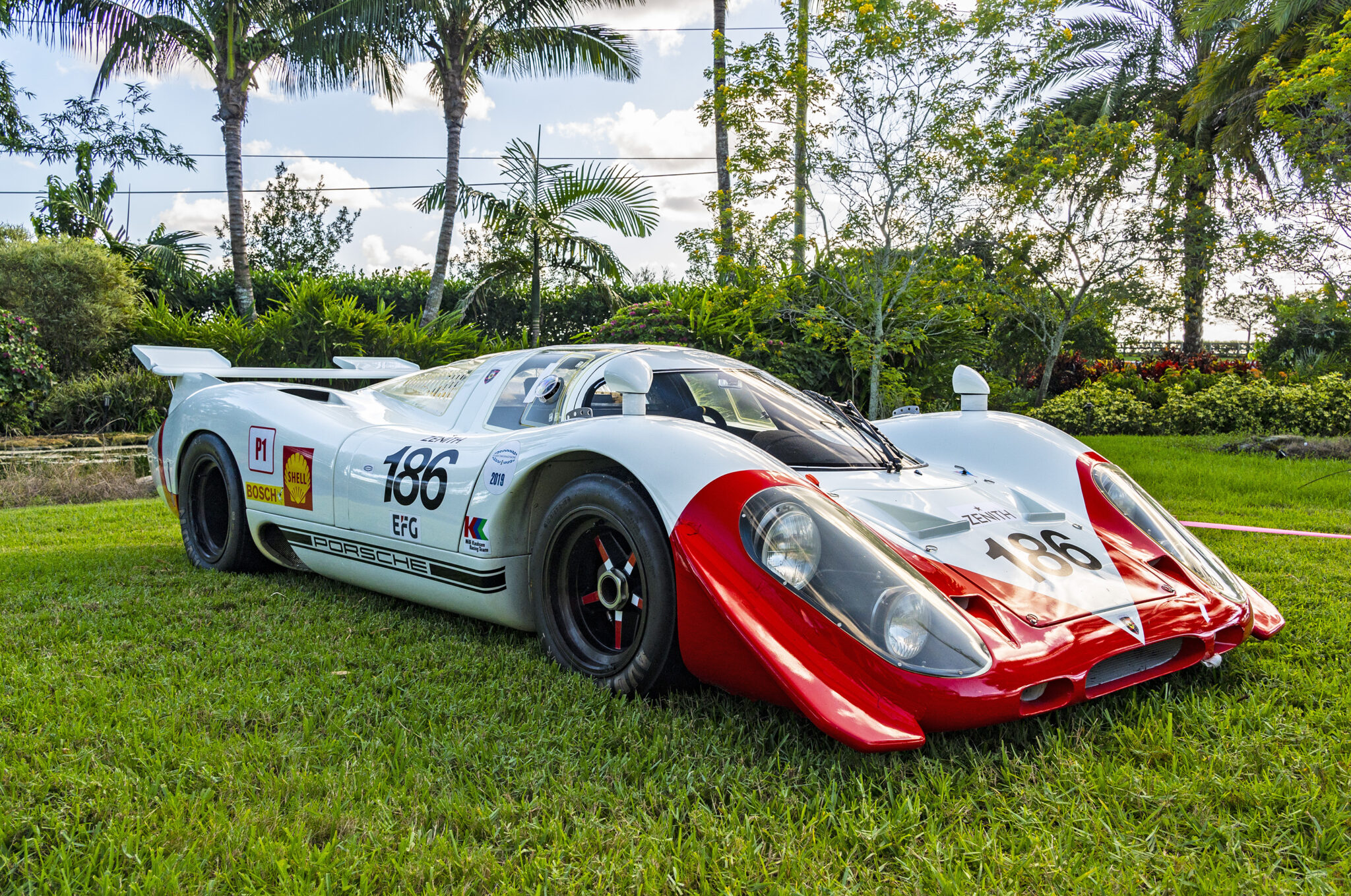 The Palm Beach Concours d’Elegance is a local classic car show that manages to bring quite a bit of heavy metal together in one location. It’s our kind of event. As much as we at Napleton.news enjoy driving new cars, we love pouring over classic cars even more. If it turns out famous racing drivers have driven some of them, that’s even better. That was the case at the 2020 event, held in Wellington, Florida. Normally held on Worth Avenue in Palm Beach, the location moved west owing to the effects of Covid19 and the advanced permitting involved in securing the location. Founder Sidney Vallon didn’t let a pandemic spoil the fun, as we walked among the vehicles, masked-up and following social distancing protocols.

In this case, the driver mentioned above was five-time 24 Hours of Le Mans winner, Derek Bell, MBE. One of the nicest men in the racing business, Bell told of his racing career as well as helped to display several historic Porsche racers including a legendary Porsche 917 LH (Lang heck-“long neck” in German) #186 and the “Miller High Life #67” Porsche 962.

A JAGUAR BY ANY OTHER NAME.

The 2020 event was held at a horse farm, where guests were free to roam amidst some pretty rare vehicles. Among them, a 1919 White “survivor,” displayed in its unrestored glory. Another was Chris Lapinski’s beautiful 1934 SS1 Tourer. This roadster, built by Swallow Coachbuilders, would see its company name change at the end of World War II in 1945. Company shareholders agreed to change the brand name to Jaguar Cars. Said Chairman William Lyons, “Unlike SS, the name Jaguar is distinctive and cannot be connected or confused with any similar foreign name. Think of this vehicle as the great-great-grandfather of the Jaguar E-Type.

Speaking of Jaguars, there were a couple of them present to keep the SS1 from feeling lonely on the show field. Yosef Yosifove’s bronze 1962 Jaguar XKE and J.C. Solomon’s red 1955 Jaguar XK140 lined up alongside the SS1 to represent the Union Jack.

Other countrymen from the UK included the 1934 Rolls Royce 20/25 of Guy Lewis and the 2002 Bentley Azure convertible of Mel Kantor and Kevin Eastwood’s 1998 Bentley Continental in red metallic.

Ilan Ferder’s Chevrolet-powered International Harvester D2 pickup truck made an impressive noise when exiting the venue after a day of showing. The rumble carried on long after the truck disappeared.

PORSCHE: THERE STILL IS NO SUBSTITUTE

That’s why there were so many of them in attendance. Notables included Russell Hibbard’s freshly restored grey 1967 Porsche 911 S. So good was the vehicle’s condition that the restoration allowed the use of the original leather interior. Rodger Hawley’s 1985 Porsche 959 Komfort held one of the positions of honor on the front lawn, as did the 1981 Porsche 924 GTS belonging to Speedart Motorsports.

Talk about legendary race cars; the 1969 Porsche 917 LH race car on display as we entered the Concours event is owned by driver and collector David Seabrooke. Seabrooke and Porsche expert Willi Kauhsen and others restored the car driven by John Woolfe in the 1969 24 Hours of Le Mans. It’s a car that began the march to motorsports safety that continues to this day. It is a fitting tribute.