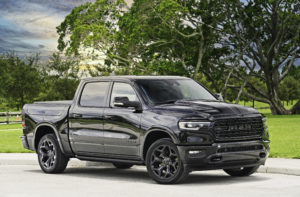 The RAM 1500 Limited Crew Cab is one tough pickup truck. Toss in the FCA 3.0-liter V6 Turbo Diesel, and you will have a truck capable of carrying more than a ton in the bed and tow more than six tons. That’s tough.

Here at Napleton.news, we drive vehicles of all types. Sometimes our spousal unit weighs in on the value and fun-to-drive quotient of these same vehicles. Sometimes they hit a home run. Sometimes they strikeout. As far as trucks go, she labeled this one a grand slam. Really? We kid you not!

WHAT IS THE RAM 1500 LIMITED CREW CAB ECODIESEL?

The RAM 1500 Limited Crew Cab Ecodiesel is the diesel-powered version of the 2019 NACTOY Truck of the Year award-winner.What’s NACTOY? That’s the North American Car, Truck and SUV of the year competition held annually to coincide with the North American International Automobile Show (NAIAS) in Detroit.

There are 29 model variations of the RAM 1500. That’s a good start, but when you start mixing and matching according to your bed length, power, cab size, suspension and towing capabilities, we are sure the model variations number into the thousands.

Our tester was based on the RAM 1500 Limited Crew Cab 4×4. That’s a bit of a mouthful, but this RAM brings lots to the table. The Limited is one of the higher-zoot models in the RAM lineup, which features top-grade leather throughout the cabin. It also includes FCA’s EcoDiesel 3.0-liter Turbo Gen-3 engine that makes a rather paltry 260 horsepower BUT offers a significant 480 lb-ft of torque. Remember, it’s all about the torque when it comes to diesel trucks and towing. As equipped, the RAM 1500 Limited Crew Cab can carry 2,040 and 12,560 lbs when properly equipped.

The Ecodiesel Turbo V6 is mated to an 8-speed automatic transmission for good fuel economy and driveability. It rides on a four-corner air suspension system with load-leveler. Underneath were a variety of skid plates to protect the delicate bits the RAM may encounter during an off-road excursion. Round it out with an available 33-gallon fuel tank, which offered a mileage range of approximately 760 miles.

WHAT ABOUT OUTSIDE OF THIS RAM TRUCK?

Our RAM 1500 was bigger than big, and made to appear even bigger thanks to the bulging hood over the V6 Turbo Diesel. The one thing that was evident is that like the metal band AC/DC, the RAM 1500 Limited is Back in Black. That’s Diamond Black Crystal Pearl Coat, to be exact. A black metallic paint job, it impresses with matching black-painted 22-inch alloy wheels, and not a speck of chrome throughout. Instead, this RAM 1500 Limited sports blacked-out trim overall, down to the RAM printed logo in the central part of the grille.

Open the doors, and you will be greeted by automatic running boards for an assist upwards into the cabin. Have some tools or things for the bed? You can place them in the side-mounted RAMBox Cargo Management System with locking hatches. There’s also the two-way rear hatch, which will drop like a conventional tailgate or swing wide like a pair of doors in a barn. Either way, easy access to the bed is guaranteed.

The interior of the RAM 1500 Limited Crew Cab is another thing entirely. Outfitted like a luxury car, it featured tons of storage cubby holes, luxurious top grain leather seating with heated and ventilated cushions and more. A central storage bin is large enough for a laptop, and the rear bench seat could hold four normal-shouldered folks or three members of the Chicago Bears front line.

The dashboard was highlighted by the addition of the Uconnect 4C 12-inch touchscreen display. Featuring updated icons and symbols that moved it further forward than any other version, it includes a high-definition screen, improved graphics and updated software, including Apple CarPlay and Android Auto. Surround-View cameras allowed views from around the vehicle.

And did we mention the cabin was quiet? Thanks to impressive sound-proofing, most people riding inside had no clue there was a turbo-diesel engine under the hood. And to drown out the sound even further, passengers could take advantage of the 19-speaker Harmon/Kardan Premium Sound System.

BEHIND THE WHEEL OF THE RAM 1500 LIMITED

Reaching for the door handle on the RAM 1500 Limited Crew Cab finds the automatic running boards gliding out to meet you. From there, it takes a moment to climb inside and get settled. A quick push of the starter button gets things fired up. No longer do you wait for glow plugs or any other such delaying factors. Instead, your 3.0-liter V6 Diesel begins with a throaty gurgle that quickly subsides to something just a bit north of a standard gasoline-engined pickup truck at idle.

Cruising in the ‘1500 gave us all the torque we needed on the down-low, near 1,600 RPMs. That’s barely breathing, in most cases. Just remember this isn’t a speed demon, although once on the highway, it had no problem keeping up with and ahead of many fast sporty-car types.

We decided the RAM 1500 Limited Crew Cab Ecodiesel is one we could live with. But maybe it’s not the exact match for you. Perhaps a 5.7-liter HEMI-equipped RAM truck is more your speed. The only way to find out is to consult with the truck experts at the Napleton Chrysler Dodge Jeep and RAM store near you. Call to make an appointment for a test drive today.