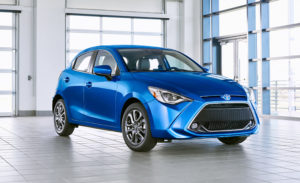 A Mazda2 by any other name, the new Toyota Yaris Hatchback XLE is the latest subcompact vehicle from the company that’s going places, Toyota. Well, almost. The 2020 Yaris Hatchback is the result of a partnership between Toyota and Mazda. Usually, that means something has to give, but in this case, it doesn’t appear like anyone is suffering. At the end of the day, the Yaris features all the fun-to-drive characteristics found in the Mazda2 with the forward-thinking of Toyota.

As far as Mazda goes, they offered their version of the Yaris here as the Mazda2. After several years, Mazda decided to withdraw the Mazda2 from the North American market.

The Toyota Yaris Hatchback XLE is an almost five-passenger, four-door hatchback subcompact that features a surprising amount of great features that help raise it above other vehicles in the segment. When Mazda withdrew the Mazda2 from the market, it created a party of one. That gave Toyota a perfect opportunity to gain market share for a vehicle that is very worthy and continues to sell as we speak. The Yaris is also offered as a four-door sedan.

Offered in three trim levels, the Toyota Yaris includes an award-winning interior that makes it feel far more upscale than its low sticker price would have you believe. Starting with base L trim level, buyers will receive a floating 7-inch touch-screen display that is complete with Android Auto and Apple CarPlay. There’s also 15-inch steel wheels and variable windshield wipers. The front seats include plenty of space for six-footers, but those same guys will feel a bit squeezed in the second row.

Moving on up to the LE model takes those and adds to them a pair of fog lamps, color-keyed power side mirrors and a color-keyed rear spoiler. The 16-inch dark gray split-spoke alloy wheels complete the package

Our Toyota Yaris Hatchback XLE included a SofTex Leatherette Interior that feels better than it sounds. We are generally not fans of pleather and were impressed to feel the comfort and durability that these chairs offered. In addition to the leatherette seating, there’s automatic climate control, LED headlights and daylight running lights (DRL), a leather-trimmed steering wheel and rain-sensing windshield wipers.

But that’s not all. The Yaris is equipped with a decidedly higher grade of safety features, including a Low-Speed Pre-collision system that scans the road ahead for a potential collision. If it sees the potential for a shunt, it alerts you and applies the brake at the same time to prevent you from having a bad day.

WHAT’S UNDER THE HOOD?

We at Napleton.news have loved the engines produced by Mazda for a long time. The motivation efforts of the 2020 Toyota Yaris Hatchback XLE center around one engine: a 1.5-liter four-cylinder engine making 106 horsepower and 103 lb-ft of torque. Considering its weight, the relative power from this engine puts it in brutish territory. It’s the same engine as that powering the Yaris Sedan.  As seen in our Hatchback model, it is mated to a sure-footed six-speed automatic transmission. But If you are of the row-it-yourself persuasion, opt, instead, for the six-speed manual transmission.

The Yaris Hatch rides on the ubiquitous MacPherson Strut suspension with a stabilizer bar in front while the trailing wheels are attached to an old-school torsion beam rear axle. In this Yaris, there’s nothing old-school about it. Electrically-assisted power steering helps to guide it and helps to move it around in its 32.2 ft. turning circle.

We use “whipping” euphemistically in this case, because truth be told, the Yaris Hatchback keeps punching above its class. Sure, 106 horsepower isn’t a significant number when it comes to counting ponies, but the fact is this “eager to please” engine hasn’t met a road it doesn’t like.

Squeeze the accelerator in an aggressive manner and you’ll find a bit of squawk from the four-banger, but we like to think of it as just showing off a bit. In its normal mode, it is perfectly suited for around-town riffing on the highway.

The six-speed automatic transmission displayed one crisp shift after another, whether we were on the highway or a curvy backroad near the Napleton Auto Group’s Southern headquarters. Handling was impressive as well because, honestly, the Yaris Hatchback XLE ride is engineered by Mazda. Which means it has a little Zoom-Zoom built into it anyway. (And that’s not a bad thing either, as we sell both brands!)