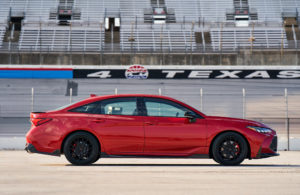 By the way, the Toyota Camry TRD rounds out the other part of the duo.

The new Toyota Avalon has taken the company’s flagship and improved it in almost every way. Constructed using the Toyota New Global Architecture (TNGA), it now features a more rigid chassis than ever before for improved handling and chassis dynamics. Hop in with Napleton.news as we take this neo-hot rod for a ride.

The new Toyota Avalon TRD the first sedan to wear the TRD badging. To this point, the TRD logo appeared on Toyota Sport Utility Vehicle and Trucks as a tribute to their off-road prowess. Our Avalon represents the fifth-generation of a vehicle that has been part of the lineup for more than 20-years. But this time, the Avalon TRD is badged in tribute to its on-tarmac performance instead.

Offering Lexus-like refinement at Toyota prices, the Avalon is the largest sedan in the fleet. It now brings an additional 2.0-inches of extended wheelbase resulting in an expansive footwell in the rear seat, that features almost as much legroom as a limousine. Or does it?

The Avalon is a four-door sedan that seats five, including room for three comfortably across the rear seat that doesn’t squeeze like it might in lesser sedans. The Avalon is available in four other trim levels, including XLE, XSE, Limited and Touring models, in addition to the TRD model. All models are powered by the same engine.

WHAT’S UNDER THE HOOD OF THE TOYOTA AVALON TRD?

Power for this TRD Avalon comes from Toyota’s bulletproof 3.5-liter direct-injection V6 engine that is used throughout the Toyota and Lexus lineup of vehicles. Found in nearly everything from SUVs to Crossovers to luxury sedans, it is as reliable as they come.

In the case of the Toyota Avalon TRD, its V6 manages to produce 301 horsepower at 6,600 rpm and 267 lb-ft of torque at 4,700 rpm. At its current horsepower rating, It’s the perfect balance between power and fuel efficiency. Still, if we were responsible for the Avalon TRD’s motivation, we would have tried to add at least a ten-percent power bump over the standard Avalon. After all, that’s what the TRD symbolizes: added power and performance. Some of that increased performance comes from thicker underbody braces for improved torsional rigidity and unique coil springs for improved handling.

Power from the V6 engine gets to the front wheels by an eight-speed automatic transmission. That’s right, this is a front-wheel-drive vehicle. It is served up with steering wheel-mounted paddle shift levers. Drivers will also have a slap-shift option to row the gears by yourself. Finishing out the array of hotness is a Cat-Back exhaust system for an aggressive, throaty purr from the tailpipes and a track-tuned sport suspension. Oh, in case you weren’t of the vernacular, Cat-Back refers to a specialized exhaust system that handles the gases from the catalytic converter, rearward.

It’s clear from outward appearances, this isn’t your daddy’s Buick, er, Avalon. Gone is all the blingy chrome and flash that appear on other Avalon models. Instead, what you have here is an aggressive front splitter and spoiler system, ground effect side skirts, a rear decklid spoiler and an under-bumper diffuser for improved aero capabilities. It presents an exciting look that would be at home on any track around the world and particularly the grid at a NASCAR Cup Race. We think it looks better than its Camry sibling that currently runs on racing “bullrings” nationwide. It rides 0.6-inches lower than the standard Avalon and features 19-inch performance tires on matte-black alloy wheels.

Inside the Avalon, drivers will find a “cocooned space” that holds the driver firmly in place. Black Sport SofTex-trimmed front seats with Ultrasuede inserts to hold occupants in place while maneuvering the twisties, wherever you may find them. The seats also feature embroidered red-stitched logos on the headrests, a leather-wrapped steering wheel, with red contrast stitching and red seatbelts.

Finally, the package is finished with a leather-wrapped shift knob, again with an embossed TRD logo to remind you where you actually are.

We’re going to start by saying we have never started up a Toyota Avalon that sounded like this. The rumble from the performance exhaust system tells you that you aren’t in Kansas anymore. (Unless it happens to be Kansas Motor Speedway, then all bets are off.) Backing out of the driveway engages the Bird’s Eye-view cameras that allow an uninterrupted view of what’s outside the vehicle. Shift the gear selector into drive and we are off.

Rolling up the windows reveals what a quiet ride the Toyota Avalon TRD is capable of. That’s thanks to its acoustic glass found in the windshield and side windows. Give it the gas all you want; That sound won’t be coming inside unless you want it to.

While the previous models were known for their ability to “float” you to your destination, the new Avalon TRD, with its uprated suspension, has sharpened the edge. Now you will find a large, comfortable sedan that will still get you there unscathed, but should you decide to really push it, this Avalon will show that it is up to the task.

Contact the Napleton Auto Group to find the perfect Toyota Avalon TRD for you today.