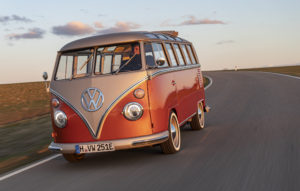 PAYING HOMAGE WHILE LOOKING AHEAD

It’s a way of paying honor to the past while continuing to move ahead.

The E-Bulli Concept started life as a 1966 T1 Samba Bus. Who can forget their days in a Volkswagen Samba? Some of us at Napleton.news have a memory or two, where the Samba played a central role. In this case, legends never die, and VWCV is making sure this one will have a few stories to tell in its future.

VWCV has partnered with eClassics, a company that is known for re-engineering and electrifying classic Volkswagen vehicles like their e-Kafer, which is a modern take on the classic – and original- VW Bug. Originally the T1 Samba was known as the Bulli, but VW was forced to change its name because of the previously-founded Lanz Bulldog Tractor Company. The name was changed, but the Bulli nickname remained.

It sure started that way. The audacious idea of switching the running gear in a historic Bulli over to a totally-electric drivetrain is not for the faint of heart. It requires patience, boldness and a heck of a lot of engineering skills. For this effort, engineers from the VWCV, along with designers from Volkswagen Group Components and the eClassics company.

The donor Samba started life in Hannover, Germany, in 1966. This particular specimen spent the first 50 years of its life on the roads of California, hitting the beach with surfboards on top, and flower children inside. We don’t know this for a fact, but we have a vivid imagination. All the parties involved in remaking this extraordinary VW Bus utilized their imaginations as well. Still, one thing was certain: This Samba would utilize Volkswagen Group’s latest electric drive components to move it on down the highway.

The fabricators first ripped out the old 43 horsepower four-cylinder boxer engine from the T1 Samba. In its place, they installed a Volkswagen electric motor delivering 82 horsepower. Think about that for a second. The new powertrain is twice as powerful as the one it replaces. The maximum torque of the new drive is the equivalent of twice what it once was. Consider 156 lb-ft of torque from the EV powerplant versus 75 lb-ft from the gasoline engine version. There has never been a more powerful Combi van than this new E-Bulli Concept.

This E-Bulli now relies on power transmission to a single-speed gearbox and between seat gear lever. The system has standard P R N D B gearing with B for energy recuperation while braking. That way, as brakes are applied, power is regenerated to the battery system to be used later. The new E-Bulli is electronically-limited to 80 mph. For comparison’s sake, the gasoline-powered T1 could achieve 65 mph.

For battery supply, the E-Bulli relies on a lithium-ion battery with a 45 kWh capacity. A power electronics system, manufactured by eClassics, controls the high-voltage energy flow between the engine and battery supply. It converts the stored DC power into an alternating current. On-board electronics and other controls receive power from a 12 volt DC/DC converter.

As with the new ID.3 and ID.BUZZ concept vehicles, the E-Bulli features a new lower center of gravity, which helps to aid in vehicle dynamics and handling.

The chassis has been completely redesigned and utilizes modern bits, including a multilink front and rear suspension, adjustable shock absorbers and a new rack and pinion steering system. Designers completed the system with four high-performance internally vented disc brakes for the ultimate in braking confidence.

Reimagining the interior of the E-Bulli was no easy task, but then Volkswagen isn’t known for doing easy. New two-toned upholstery starts things off, and combine with a center console to present a neat, clean presentation all the way down to the electronic starter button. A solid wood floor reminds viewers of a ship’s deck, and the large, panoramic folding roof only adds to the effect. Another addition, the modernized speedometer, is based on the original but has been updated with digital features, including battery range and charge status.

Although it is not currently an official VW product, customers can purchase the eClassics E-Bulli today. Contact eClassics for more information. This Samba EV is just that look back that presents a clear view of the road ahead.