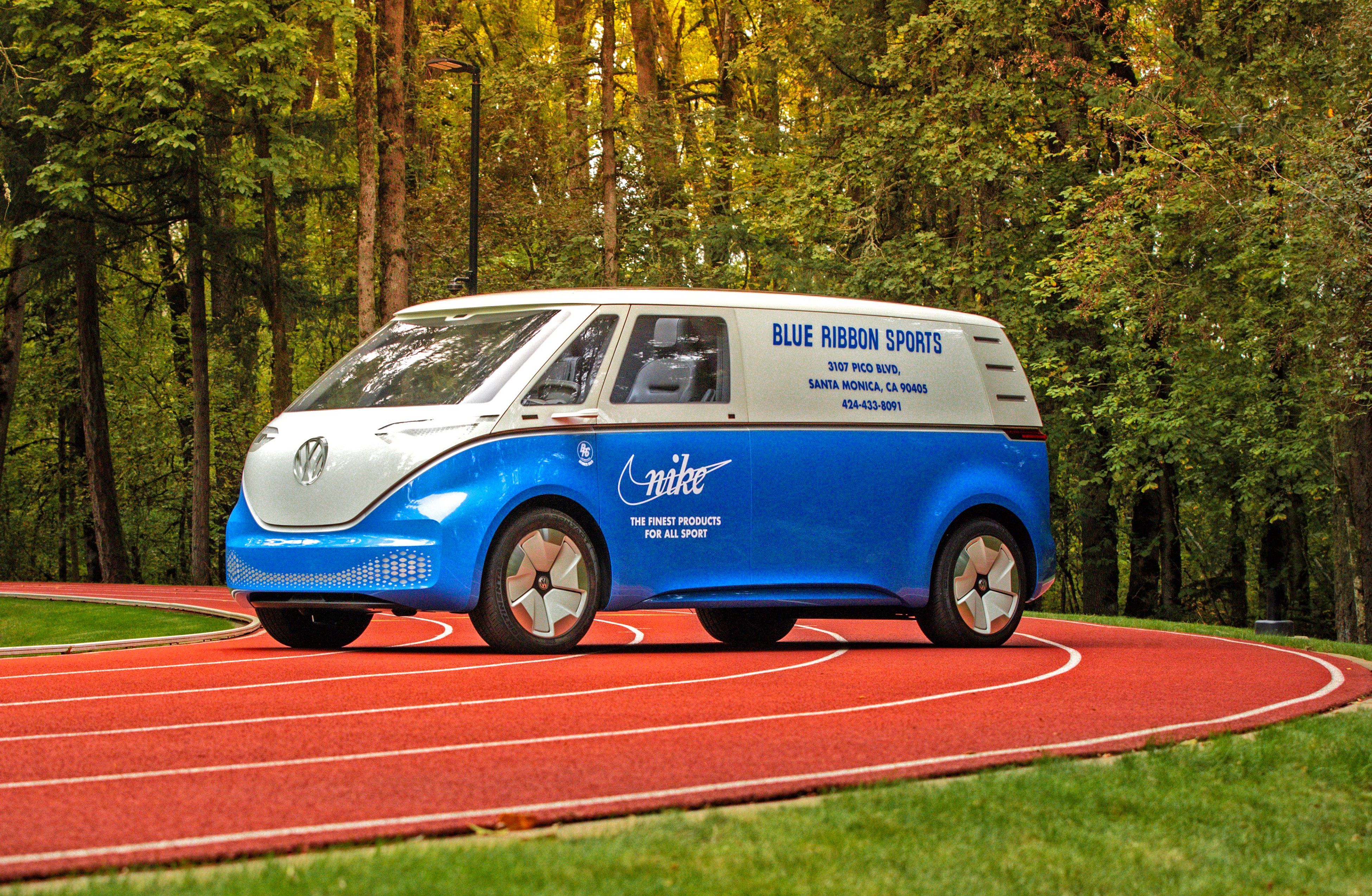 An update of one of the most iconic vehicles ever created, the Volkswagen I.D. BUZZ CARGO, goes even further to recreate an early part of another iconic brand’s history. In a joint venture between Volkswagen and Nike, the two companies have the original van that helped to publicize the Nike brand name during its early days.

Featuring a slightly updated livery still rooted in a retro past, the Volkswagen I.D. BUZZ CARGO will attend running events across the country to help support Nike Athletes and promote the brand. But you may be asking why does the side of the BUZZ CARGO say “Blue Ribbon Sports?” 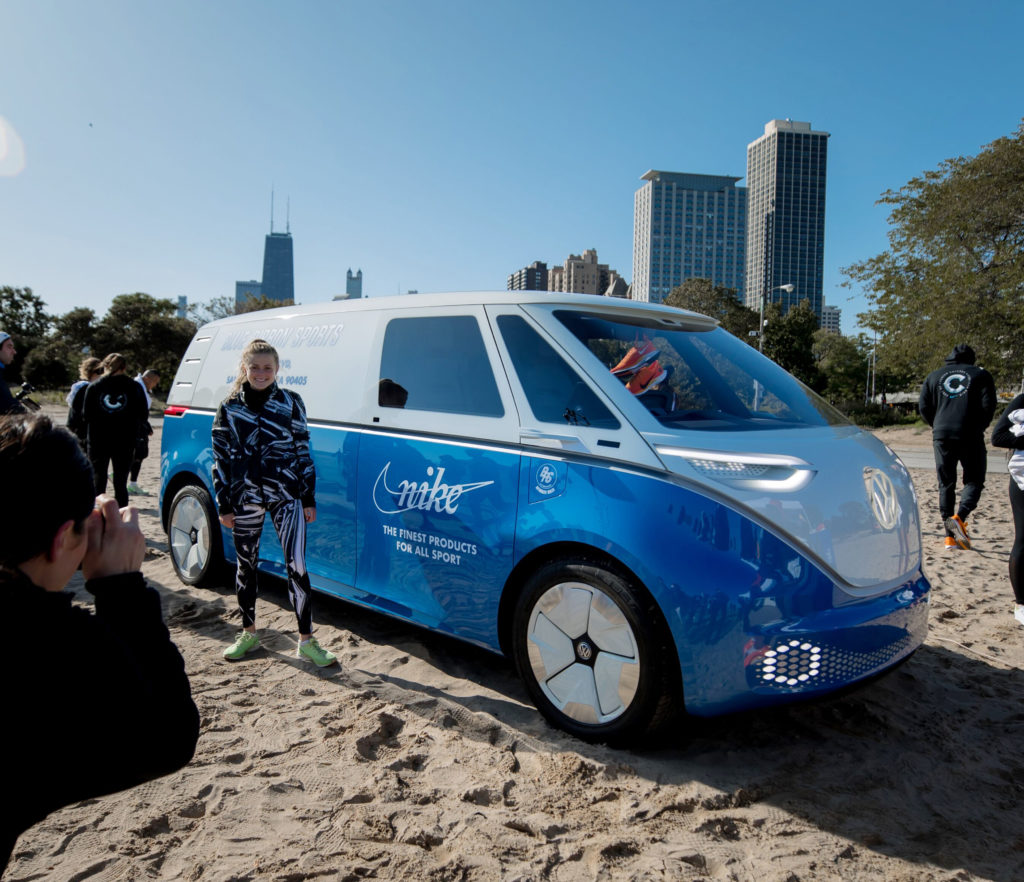 Established in 1964, as Blue Ribbon Sports, Nike, the brainchild of Phil Knight and Bill Bowerman, became famous for their on-point mix of product innovation and customer service. Their first employee, Jeff Johnson, helped get the fledgling brand off the ground by opening the Blue Ribbon Sports storefront in Santa Monica, California. It was here that the Nike brand started selling their famous waffle maker-soled running shoes in January 1967. In addition to managing the store, Johnson gained quite the reputation driving around the region to local track meets to sell product out of his personal ride, which happened to be a Volkswagen Type 2 Bus.

Fifty-two years later, the original location for Blue Ribbon Sports opened again to show the Nike brand’s commitment to runners in the greater Los Angeles area. The reopening occurred just a short while after Volkswagen debuted the I.D. BUZZ CARGO Concept vehicle, which it turns out, is an integral piece of the history of both iconic brands. 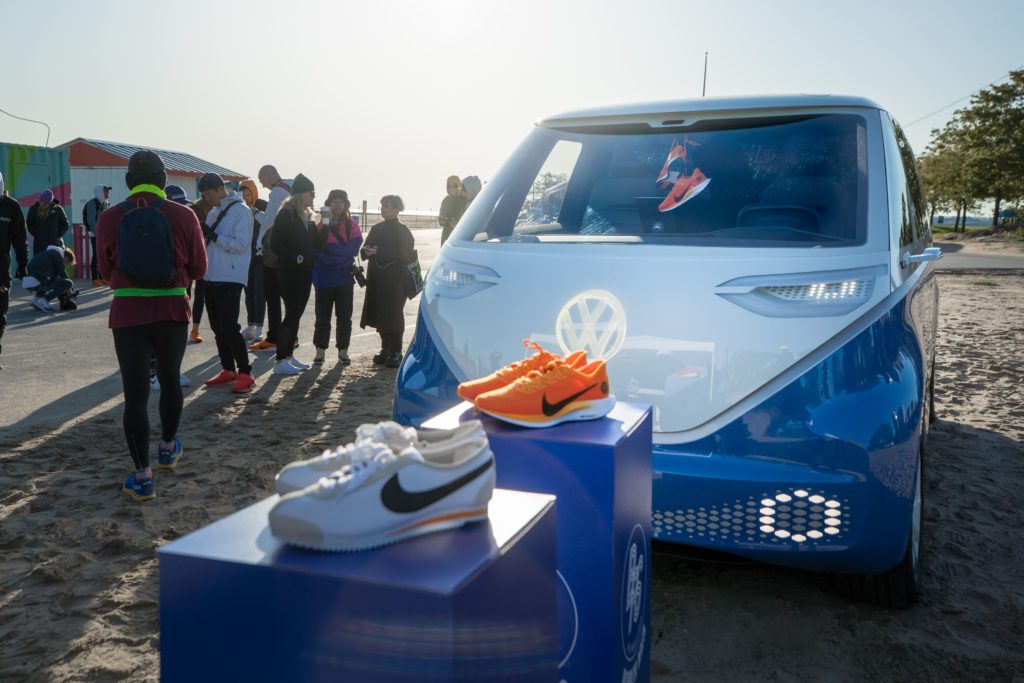 The Volkswagen I.D. BUZZ CARGO is part of the VW brand’s DRIVE BIGGER initiative of social and corporate responsibility. While touring the country with Nike/Blue Ribbon Sports, the BUZZ CARGO will serve as an assist vehicle for athletic footwear recycling at each location. The Nike “Reuse-A-Shoe” program at each location will serve as a drop-off point where runners and others can drop off worn sneakers new life by transforming them into running track material, play and turf surfaces and other athletic gear where the two brands will display their shared focus of sustainability and environmental consciousness to athletes and fans around the country.

The Volkswagen brand was thrilled to help. “To learn Volkswagen played such an important role in Nike’s early history is really a big deal to us,” said Saad Chebab, Senior Vice President, VW Brand Marketing. “Supporting the rebirth of BRS is the perfect platform to help promote the common values of our companies, while showing the world VW’s commitment to electrification isn’t just about personal transportation—it’s about moving everything in a smarter fashion.”

Introduced at the 2018 Los Angeles Auto Show, the Volkswagen I.D. BUZZ CARGO is the newest member of the I.D. Family of fully-connected electric vehicles from Volkswagen. Depending on configuration, the BUZZ CARGO can achieve between 200 and 340 miles per charge. The I.D. BUZZ CARGO receives power from a 201-horsepower (150kW) electric motor, a single-speed transmission, and rear-wheel-drive (RWD). VW says all-wheel-drive could be possible with the addition of an electric motor for the front axle. The top speed of the BUZZ is electrically limited to 99 mph.

The look of the I.D. BUZZ CARGO is a combination of familiar looks with futuristic elements and views. The front end is characteristic Volkswagen with the iconic “friendly face” from the old vehicle but reinterpreted. LED “light blades” take the place of the original round headlamps. The BUZZ CARGO is about 4-inches longer than the standard I.D. BUZZ. The CARGO concept has a maximum payload of 1,760 pounds.

It also includes a solar roof panel that generates enough energy that it can extend the mileage range of the BUZZ CARGO by up to 9.3 miles a day.

Volkswagen has dropped hints that the I.D. BUZZ CARGO could appear at Volkswagen Dealerships on the roads as soon as 2022.