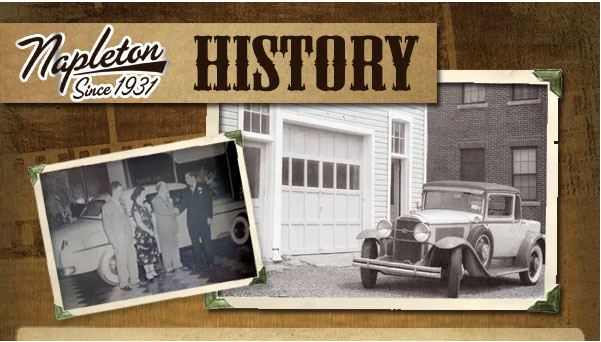 Edward W. Napleton opened his first automotive business in 1931 on Chicago’s South Side. With a $700 loan, a strong work ethic and a belief in common courtesy, he opened the Napleton Buick Service Station. Francis Napleton, Edward’s son, was by his side to help foster the growth of the young business in its early years.

Napleton’s first dealership was a DeSoto franchise. When that brand was discontinued with little warning, Napleton quickly aligned itself with another Chrysler nameplate, Plymouth, eventually being awarded several additional franchises. Edward and Francis both believed in hard work and exceptional customer service, values that they passed down to the next generation of Napletons. Five of Francis’ eight children have worked in the auto business their entire lives.

Edward F. (Ed) Napleton, Francis’ son, is a third-generation auto dealer. He began his career as a kid sweeping the floors at the dealership owned by his father and grandfather. He moved up the ranks, serving as a technician, then in sales and finance, and eventually as a general manager. At just 23 years of age, Ed became the youngest car dealer in the United States when he was awarded a Pontiac dealership in Blue Island, Illinois.

Today, the Ed Napleton Family operates more than 74 franchises in seven states. Taking pride in helping each community they live and work in, the Napleton Family name has become synonymous with excellence and teamwork. What started as a small family-owned business has blossomed into one of the most forward-thinking dealership groups in the country. Four of Ed’s five children have proudly joined him in pursuing the family business and have a hand in the company’s day-to-day operations.

The Ed Napleton Auto Group remains dedicated to their customers in every aspect of the car buying experience and providing unparalleled customer satisfaction.