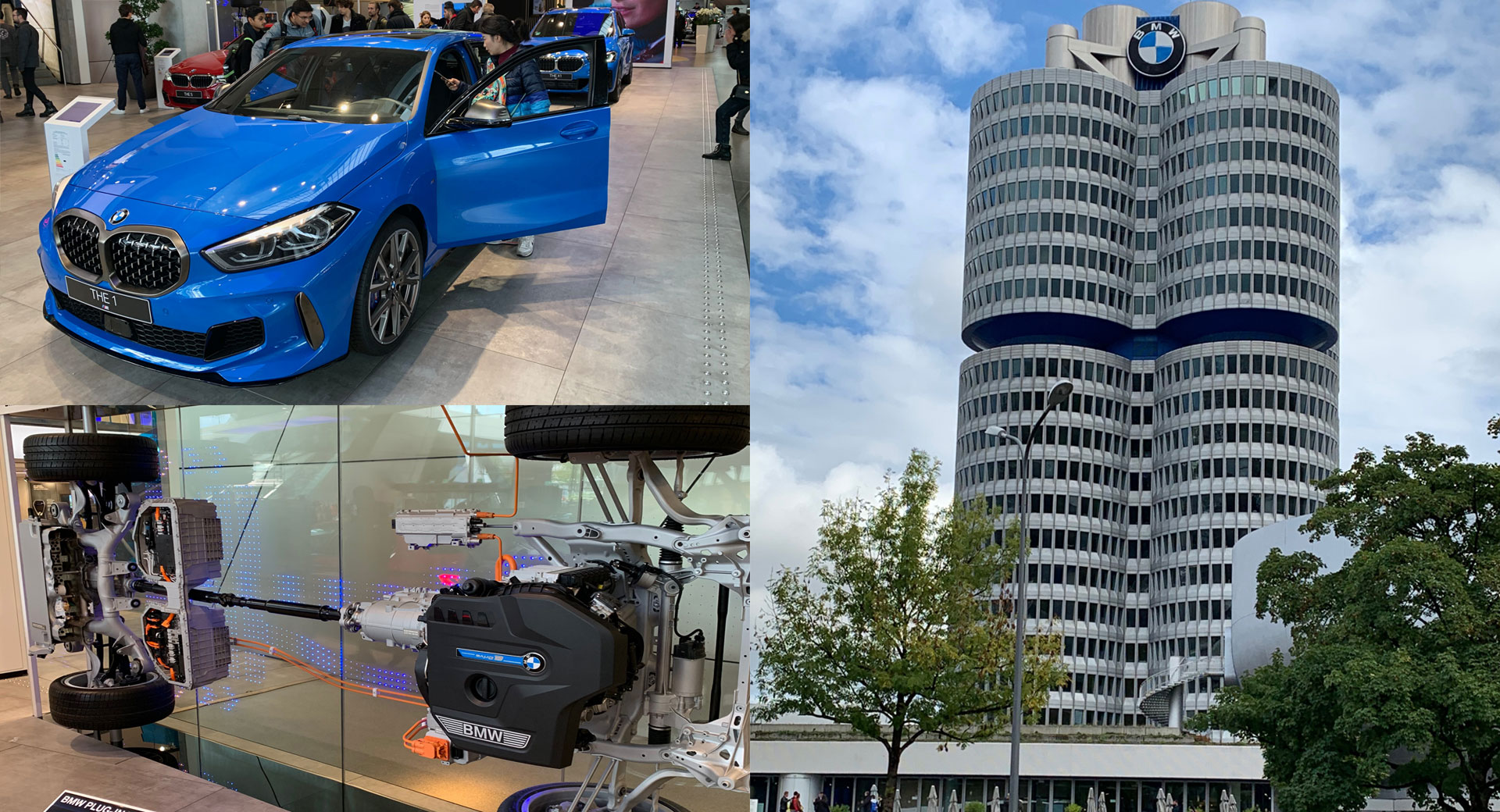 When in Munich, one would be remiss to take a tour of the city without visiting the BMW Welt & Museum. That’s why I took a self-guided tour of the facility a day after gallivanting about the festival grounds at Oktoberfest. No hangover was going to prevent me from experiencing the incredible feats of architecture that make up this magical place, and the innovative automobiles housed within it.

Before stepping into the Welt & Museum facility, the BMW campus welcomes visitors foreign and domestic with a clean, modern appeal. Originally constructed in 1973, the grounds received a makeover between 2004-2008 which includes ramps that are used as “roads” to guide visitors from one building to the next. I suppose the intent here is to think of yourself as a German-engineered Beemer gliding along each of the museum’s impressive 25 exhibits. This part is easier if you still have a decent working relationship with your inner child, or happen to be a person under the age of 10 reading this.

Speaking of freeloaders, you can experience plenty here without ever dropping a dime; although you will have to pay €10 for access to certain exhibits. The first showroom displays vehicles that are dedicated to BMW’s performance parts like the 1er M Coupe and the GTE Motorsport. With an intimidating design outfitted by a slim body, bold colors, and a rear spoiler, this car demands the attention of onlookers all over the room. When I saw the GTE up close, it became impossible to overlook it without becoming curious about how BMW is able to create a machine capable of going 0 to 60 in three quick seconds. Luckily for me, I was at the very museum that could provide answers to such questions.

Adjacent to the “welcome showroom,” as I’ve come to call it, is the campus’ main building which holds a majority of the exhibits, including the subsidiaries of Rolls Royce and MINI. These displays serve as a gentle reminder of how far the BMW influence is capable of reaching. As two of the biggest staples in British automotive engineering, Rolls Royce and MINI were acquired by BMW in 1998 and 2000, respectively. Since then, the brands have stayed true to themselves while operating under the guiding direction of BMW. It’s safe to say that this trio can be considered a powerhouse in trendsetting and a pinnacle of excellence for modern European engineering.

My favorite part of the BMW Welt & Museum is that you don’t have to be a gearhead to enjoy yourself. The exhibits are so much more than a series of cars from past, present, and future on display. In fact, they have a Junior Campus dedicated to educating young ones about how automobiles are made through interactive storytelling. There also happens to be a gift shop that sells a plethora of small souvenirs, memorabilia, and apparel which embodies the BMW lifestyle. Between you and me, I don’t think I can fully enjoy said lifestyle unless I start earning a lot more money.

You can spend half a day eyeing the exhibits to soak up as much knowledge as possible and still have plenty to do. But all those steps and all of that information getting crammed into your skull naturally leads to a desire to sit down for a bite, a little water, and maybe some hair of the dog. Visitors have the option of five distinct eateries, each with various cuisine and of course, authentic German beer. There is Restaurant M1, which is perfect for lunch, a snack bar called CooperS, the French-Bavarian brasserie of Restaurant Baverie, fine dining at EssZimmer, and a casual cafe by the name of The Biker’s Lodge. With plenty of seating at the cafe, this was my first choice to take a load off and engage in lively conversation over a Paulaner (and water because I’m responsible).

After a fun-filled afternoon, I highly recommend the BMW Welt & Museum to car-enthusiasts and those who love to learn the most. As a Chicago native, my bar is high when it comes to museums, and now it is even taller due to the accessibility of the BMW Welt. Visiting here will make you think of how far human beings have come with automobiles, and it’s thanks in large part to inventive automakers like BMW who are always thinking ahead to the #NextGen.

Until next time, Auf Wiedersehen.