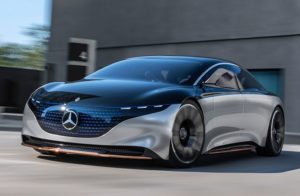 Mercedes-Benz has announced major updates regarding the EQS electric vehicle (EV). The latest statement revealed that the electric sedan will be built at the same plant as the upcoming S-class and is expected to offer 300 miles of range on a full charge.

The luxury sedan first made an appearance last September when Mercedes released a trailer for the concept car. Now that the German automaker has released more details about the EQS, that concept is inching closer to reality.

“The EQS will be the fully electric member of the next S-class family,” according to a press release from Mercedes.

Take a look at the following video to see what the automaker has in mind for this luxury EV sedan beyond its high mile range.

Highlights of the EV include its noticeably different contours which stretch out to a “one bow” design. This visual aesthetic is easily seen from the 360-degree continuous light band that wraps around the EQS.

Additionally, each headlamp is made from two holographic lens models which allow drivers to use various digital light configurations to match their personality or mood.

The interior design of the EQS was inspired by what is commonly seen in yachts but is also used from sustainable materials. The cabin is outfitted with maple trim from responsibly managed German forests, DINAMICA microfiber sourced from recycled bottles, and a roof liner developed from recycled ocean plastic.

Based on the latest announcement from Mercedes, it is confirmed that the EQS and its battery components will be assembled at the same carbon-neutral plant as the upcoming S-class in Sindelfingen, Germany.

The Ed Napleton Automotive Group owns and operates a Mercedes-Benz dealership in Rochester, Minnesota. For more information on the newest models to arrive at this retail location, visit the dealership website.