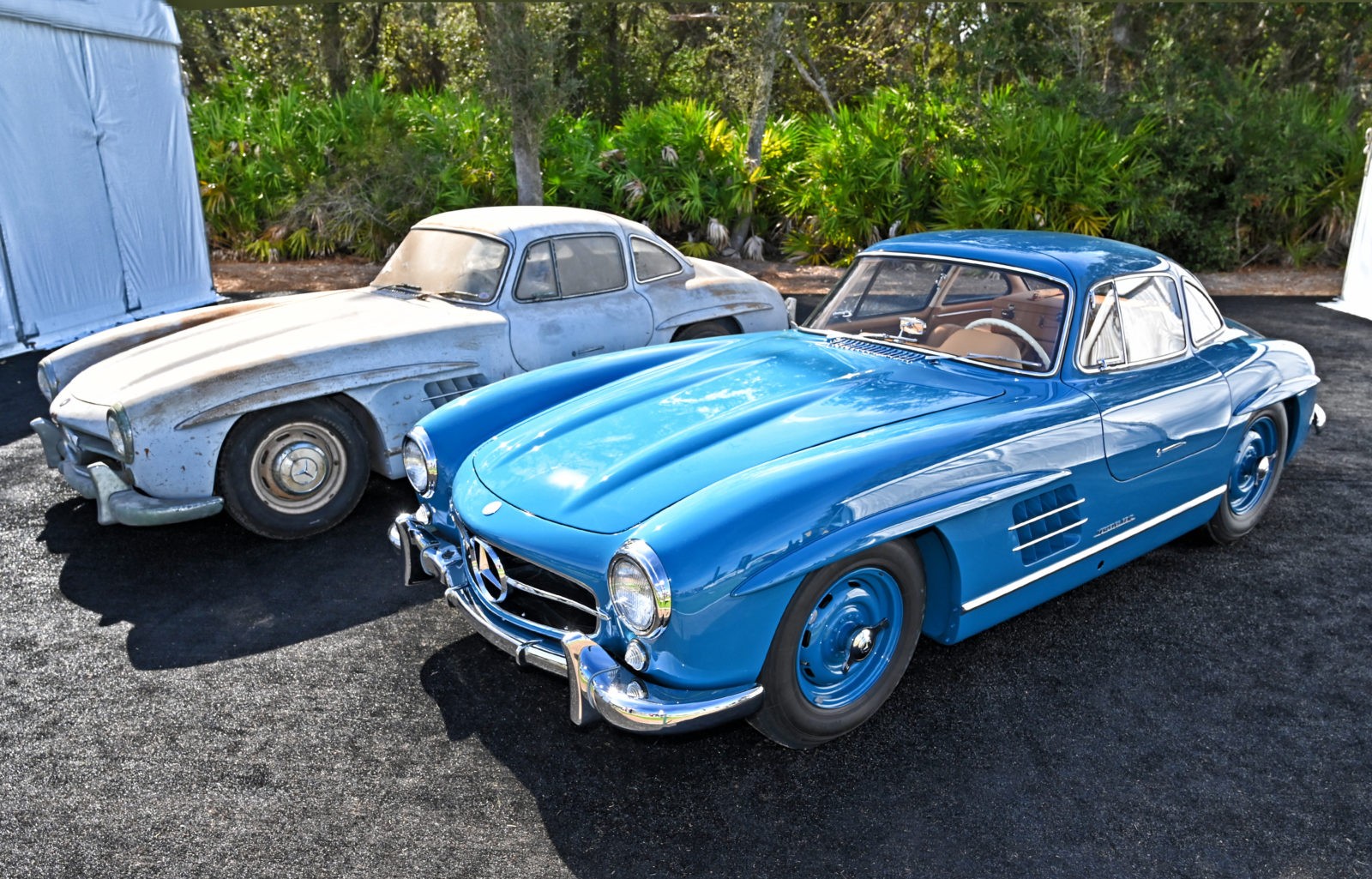 It doesn’t take long for the dust to settle. Look at a desk at home. A week after cleaning, there’s a fine patina of dust that has landed right where your furniture cleaner just made a pass. Now imagine having 54 years of crud, atmosphere, salt air and more. That’s just the way a 1954 Mercedes-Benz 300 SL “Gullwing” was found in a barn near Jacksonville, Florida. But that’s just of it.

Known internally at Daimler GmBH by its W198 model designation, the 1954 Mercedes-Benz 300 SL, chassis 43, and its twin brother, chassis 44, were centerpieces at the 2019 Amelia Island Concours d’Elegance show this past March. Built side-by-side in Stuttgart, Germany, more than 65 years ago, they both took different paths in their lifetimes.

Originally purchased by a Jacksonville, Florida, lawyer (Approximate 1954 MSRP: $7,900), it was a basic street 300 SL whose owner made sure to exercise it on the race track every now and because these thoroughbreds were meant to run. The lawyer eventually sold the car to his mechanic, who also raced it a bit before selling it to a local pilot in 1957. After a while, that owner decided to have it painted, striping all the trim parts from the car, placing them in the trunk. Some restorative work was performed along the way until when everything mysteriously stopped. Mercedes-Benz Classic Center’s Constantin Von Kageneck claims that to be the last known activity of chassis 43, as they found a newspaper dated to 1965, used to help with re-dying the leather seat covers.

Mercedes-Benz Classic Center in Irvine, California, bought the car in 2018 for around $900,000, rat nests (seriously) and all included. this example was largely intact. Originally finished in medium blue, it featured a very rare gooseneck-style shifter that only appeared on the first 50 Mercedes-Benz 300 SL vehicles. As found, the car was in primer grey in anticipation of a paint job that never occurred. The odometer still shows a relatively low 35,308 miles.

Chassis 44 was originally built in fire engine red with a white leather interior. The original buyer thought that would be too much to keep clean (Kids? Pets?), so he decided to replace it with a tan interior with matching low-profile luggage that straps into place behind the driver and passenger seats. Other than the exterior and interior colors, number 44 has been restored to its exact factory specifications by the Mercedes-Benz Classic Center.

As they once were.

The 1954-1963 Mercedes-Benz 300 SL was a two-door coupe known famously for its gullwing-style doors that swing upward for entry.

A roadster was also offered from 1957 to 1963. The 300 SL gets its name for the 3.0-liter size of its inline six-cylinder engine, while SL stands for Super Leicht which translates to Super Light in English. It never was intended for production but Mercedes importer Max Hoffman told the factory he wanted to order 1,000 copies for sale to the booming post-war enthusiast’s market in the United States. The factory listened and the 300 SL made its World debut at the 1954 New York Auto Show.

Built using a tube frame with an attached body, the 300 SL is power by a 3.0-liter longitudinally-mounted inline six-cylinder engine. It receives its fuel via direct fuel injection instead of more traditional carburetors of the day. The engine included innovations like a dry-sump oil pan which continues to direct oil into the oil sump even under heavy leaning through a turn. The engine was delivered with a sport camshaft which boosted its power to 240 horsepower and 217 lb-ft of torque. The SL was equipped with a four-speed manual transmission and was in nature. Thanks to the dry sump oil system and low engine mounting, the car was perfectly set up to go fast, whether on the street, or the track. Speaking of , the 300 SL’s top speed was approximately 160 mph.