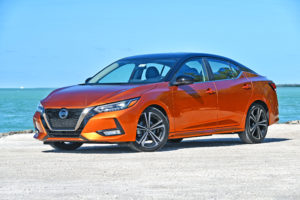 The Florida Keys are not the best place to bare your feet and soak up some vitamin D. But our Monarch Orange metallic 2020 Nissan Sentra is bright enough to give us a proper dosage anyway. The Keys are mostly built on Coral stone, so there’s no burying of toes there. But it’s a fun route to drive on the way to the Conch Republic.

And with the future so bright, we don our shades and head south. This is the eighth-generation of the Nissan Sentra since 1982. And did we say popular? Well, no, not yet. But with more than six-million sold since that year, it’s clearly a best seller.

In what Nissan is heralding as a New Era of Sedans, the Sentra shows why they are still relevant. With more personal space, craftsmanship and style than a crossover utility vehicle, they cause a genuinely emotional experience. Add advanced technology, safety, value and efficiency, and there’s a lot to get passionate about.

The new Nissan Sentra is the latest sedan in Nissan’s stable to clearly align with the style of vehicles that began with the latest Nissan Maxima. As a result, all models including the Sentra, Altima and Versa, all appear to mimic the Maxima’s floating roof and their own style of side window kink, as seen on a certain brand of German vehicles.

From the outside, the Sentra is now two inches wider and two inches lower than the model it replaces. Nissan’s familiar V-Motion front grille and boomerang LED head and taillamps once again lead the way. New this time is a two-tone color scheme that includes a black treatment that designers say helps lower the “visual gravity” of the Sentra. Will the public take to this two-tone look? Only time will tell.

The new 2020 Nissan Sentra will be available in S, SV and SR trim levels. Buyers can further personalize them with SV Premium and SR Premium packages.

The interior of the new Sentra is more refined than ever before. They have been updated with premium materials and craftsmanship, and incorporate more insulation for a quieter overall environment. Nissan has imparted a bit of sportiness, too, with the addition of GT-R inspired vents and a D-shaped performance steering wheel.

Also on board are Nissan’s Zero Gravity seats, which are some of the most supportive chairs you’ll find in any vehicle. There’s an all-new infotainment system that includes Apple CarPlay and Android Auto, as operated through a seven- or eight-inch capacitive touch screen display.

Nissan loads on the safety technology with its Safety Shield 360 suite of advanced features. The system includes Nissan’s Intelligent Mobility features such as High-beam assist, which switches to low beams when oncoming vehicles are detected. Lane Departure Warning alerts drivers to drifting out of one’s lane, while Rear Cross Traffic Alert that informs of traffic while backing from a parking spot. Rear Automatic Braking brings the Sentra to a complete stop when detecting a stationary object. That couples with Blind Spot Warning and Automatic Emergency Braking with Pedestrian Detection.

Between the interior comfort and the advanced safety features that are included in the Sentra, it’s clear (with apologies in advance to Mark Twain) “that reports of the sedan’s death are greatly exaggerated.”

GET ALONG LI’L DOGGIE

To give motivation to the new Sentra, Nissan has called on its 2.0-liter naturally-aspirated four-cylinder engine and a new version of their continuously variable Xtronic transmission. Now featuring more power than before, it is a more suitable match for the new Sentra platform that includes a lower center of gravity, a new independent multi-link suspension, McPherson struts in front and twin-tube shock absorbers at all four corners.

A dual-pinion electric power steering system controls steering feel and agility. It’s also a part of Nissan’s Active Understeer Control System, which uses intelligent control logic for a torque-vectoring type of feeling that helps to shorten the distance required to negotiate a turn. It all goes to enhanced handling, ride comfort and driver control.

BEHIND THE WHEEL OF THE 2020 NISSAN SENTRA

The new 2020 Nissan Sentra didn’t disappoint once we were settled behind the business side of the cabin. We instantly found a comfortable position in the Nissan Zero-Gravity power driver’s seat. We were disappointed, though, to see the front passenger seat was manually-controlled instead.

Getting underway in the new Sentra was as easy as tapping the push-button start, adjusting the mirrors, hitting the turn signal and moving along into traffic. Move along, nothing to see here. And that’s just the beauty of it. There really is nothing out of the ordinary here other than the fact you are driving behind the wheel of a well-crafted five-passenger vehicle that proves that the sedan is alive and kicking.

Acceleration from the 2.0-liter naturally-aspirated four-cylinder engine was surprisingly brisk. This was especially rewarding, considering the engine is not a turbocharged powerplant, but a regular direct-injection mill that replaced the 1.8-liter engine of the previous model Sentra.

The new mill makes 149 horsepower. That’s 20-percent more powerful than before with 17-percent more torque than the outgoing model. With that extra oomph, it displays absolute ease of efficiency and operation. It’s one of the best that Napleton.news has tested. That extra power is delivered to front-drive wheels by the latest-generation of Xtronic transmission. This new transmission offers a D-mode step shift program that simulates shifts better than any previous examples we have experienced.

We also must offer kudos to the new Sentra’s acoustic engineers for a job well done. Between added insulation and quieter 18-inch tires, we were able to drive to Marathon, in the Florida Keys, all while using our “inside voices.”

Whether you want to drive your Nissan Sentra to the Florida Keys or just around your home, the Sentra specialists at Napleton’s St. Louis Nissan will be happy to help you find the Sentra of your dreams. Please contact them for an appointment and a test drive.