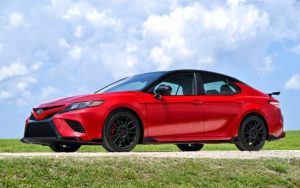 We’ve been waiting for the Toyota Camry TRD for quite a long time. The TRD suffix doesn’t wind up on just any Toyota vehicle. It is reserved only for the worthy. But is the Camry a worthy vehicle? Read on with Napleton.news for more.

WHAT IS THE TOYOTA CAMRY TRD?

The new Toyota Camry TRD is the performance version of the brand’s most popular vehicle that began production eight generations ago in 1982. It’s a four-door, five-passenger mid-size sedan that is available in a variety of trims ranging from base L trim level and climbing through the ranks to LE, Sporty SE, XSE and luxurious XLE models. Our Camry TRD model goes further and features track-inspired bits that will appeal to fans of the company’s Toyota Racing Development group. Known for their off-road prowess, in recent years, they have held sway in the NASCAR Cup Series, even claiming the championship in 2019.

The Toyota Camry is available with a variety of powertrains, including a 2.5-liter inline four-cylinder engine making 203 horsepower and 184 lb-ft of torque. The second choice includes a 2.5-liter inline four-cylinder engine mated to an electric hybrid power generator for a combined 203 horsepower and exceptional 51 city/53 highway miles per gallon.

In the case of our Toyota Camry TRD sedan, it gets its punch from a 3.5-liter V6 engine that pumps out 301 horsepower and 267 lb-ft of torque. That’s the same as available in the more luxe Camry XLE or sport XSE. But the TRD goes further with a reworked suspension, that while not appreciably harder than the setup found in other Camry models, tends to favor more aggressive cornering and enthusiast driving styles. It accomplishes that through the addition of new shocks, thicker sway bars and damper tunings for a tightened suspension feel.

The V6 engine is mated to a smooth-shifting 8-speed automatic transmission. It includes steering wheel-mounted paddle-shift levers that allow you to forget driving like a NASCAR driver and channel your favorite Formula 1 pilot instead.

What a difference an eighth-generation makes! The new Toyota Camry TRD is downright sexy. There. We’ve said it. Quite a change from previous models, the new look is the result of Toyota chairman Akio Toyoda wishing that cars from the company he leads are more exciting and able to draw passion from their owners. We’d say mission accomplished, although the two-toned roof may take some getting used to.

The look is hunkered down and that’s because the TRD sits 0.6 inches lower than a standard Camry, thanks to the revised suspension package that is part of this model. There are contrasting ground effect panels all the way around, ending up at the rear diffuser with chrome TRD exhaust finishers. Oh, and there’s no way you can miss the huge rear deck spoiler rising from the Camry’s trunk.

THE CAMRY TRD INSIDE

The cabin of the Toyota Camry TRD features a sport-oriented look that takes some inspiration from the Toyota AE86 sports car. Driver-oriented, the dashboard is canted towards the steering wheel for easy access at all times. Our black interior included red accent stitching throughout for a continuation of the theme. The 8-inch touchscreen display offers control of the audio, navigation and cellular systems, while there is a manually operated HVAC system. This time around, the Camry includes Android Auto to keep the previously included Apple CarPlay company.

Leather seats with red accented cloth inserts and TRD badging along with well-formed bolstering, kept us in place while negotiating some twisty turns on our South Florida test loop. The rear seat offers good head and legroom, provided you reside south of the six-foot mark. Finally, the rear seats do not fold down as they would in other Camry models because of the extra bracing used to stiffen up the Camry’s chassis.

The first thing you’ll notice is the throaty growl that comes from the performance exhaust system on this Camry. After it settles back into idle, it is still rather mighty and gives off hints of its old Toyota Formula 1 engine sibling. Jumping from a standing start will chirp the tires. First gear bangs off quickly followed by a rather tall-ish second cog. Once you have passed that, the engine continues to its desired rev-point. If you aren’t paying attention, you will find yourself very attractive to members of the local constabulary community in no time. Like bees to honey, we say. You have been warned!

This limited-edition Toyota Camry TRD has been totally massaged by the TRD kids to provide a ride that is unlike any you have ever experienced in a Camry before. Did we mention it’s a limited edition? To avoid being caught out in the cold without a coat, we recommend contacting the experts at Napleton’s Toyota of Brookfield, WI or Napleton’s Toyota of Urbana, IL, today.