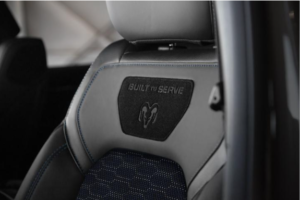 A new cohort of RAM 1500 trucks will be making their way to dealerships across the country with the all-new “Built To Serve” limited edition models.

This is the second installment of the production phase but the concept remains largely the same, and we are expecting them to officially be released on Flag Day (Sunday, June 14).

Each RAM 1500 that is part of the “Built To Serve” lineup is designed to honor America’s five land, sea and air-based armed forces. This second installment offers a nautical-inspired theme with both Ceramic Gray and Patriot Blue exterior colors.

Either design choice will be complemented by a black interior with Light Ambassador Blue accent stitching, according to a press release from the FCA.

“RAM truck owners, whether civilian or military, are familiar with the ‘Built To Serve’ adage as it’s something we strive to build into every truck and van we produce,” said Mike Koval, Head of RAM Brand, FCA – North America. “RAM honors those who serve or have served in the United States with distinction, and we continue to welcome volunteers to our RAM Nation volunteer efforts.”

The RAM “Built To Serve” edition trucks feature a variety of unique design aesthetics that truly set them apart as uniquely patriotic models. Each limited edition 1500 has a United States flag and “Built To Serve” decal on each of the rear quarter panels.

When it comes to performance, the limited edition RAM 1500 trucks come equipped with 4×4 Off-Road features including:

The Ed Napleton Automotive Group has a total of seven retail locations that sell RAM models. These dealerships are spread out amongst Illinois, Missouri, Pennsylvania, and Florida.

Even if you don’t live close to one of these stores, you can take advantage of the Accelerate America program to inquire about the availability of the RAM 1500 “Built To Serve” models.