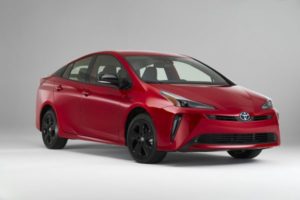 Two decades have come and passed since the Prius came to Toyota dealerships across the world. Since then, the first hybrid production car to hit the market has revolutionized the auto industry. And while the Prius may have a reputation for being quiet, the new 2021 20th Anniversary Edition models appear anything but reserved.

Available in either Supersonic Red or Wind Chill Pearl, Toyota will be releasing 2,020 of the special edition Priuses for the 2021 model year. These models feature a striking black exterior trim, a color-keyed rear spoiler, and several other notable design elements to commemorate everybody’s favorite hybrid.

“The overall look is both sporty and elegant, with just a touch of mischief,” according to Toyota. “But there’s nothing mischievous about a car rated at a manufacturer preliminary-estimated 54 city MPG / 50 highway MPG / 52 combined MPG and equipped as standard with one of the auto industry’s most advanced driver-assist safety systems.”

Toyota comments that the cabin offers more room than some SUVs on the market. Due to its low-drag shape, the new Prius makes smart use of the interior space by optimizing the cabin for more head and legroom than you would expect in a midsize car.

One thing that will remain unchanged for the 2021 special edition models is the familiar central screen interface. Each Prius comes with a 4.2-in. color Dual Multi-Information Display with customizable screens. The infotainment system supports Apple CarPlay and Android Auto integration while the display makes it easy to use climate control, driver support systems, audio system content, and navigation.