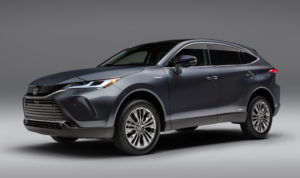 The company went virtual to introduce Toyota’s new Venza and Sienna Hybrids, Monday. Following the cancellation of the New York Auto Show, where both vehicles were to be introduced, Toyota chose to go online to release the two new vehicles to the world. It was the second generation Venza Crossover and the fourth-generation Sienna Minivan that were the stars of the show. Only this time, there was much more to show off.

Follow along and we will highlight the new features of the Venza and Sienna Hybrids.

The all-new 2021 Toyota Venza Hybrid is a totally new version of the Venza, which previously existed from 2008 until 2015. Designed as a five-passenger, two-row midsize crossover utility vehicle, it seemingly appears at just the right time to take advantage of the crossover/SUV boom, which seems to be affecting the buying decisions of most purchasers. Always a favorite of Napleton.news, the Venza reminded us of a higher-riding station wagon. It was the perfect vehicle for the time.

The combined hybrid powerplant delivers 219 total system horsepower. Thanks to the hybrid electric motors, acceleration is enhanced in low-torque situations such as leaving from a stoplight. The electric motors step in at this point to enhance gas engine power without requiring the 2.5-liter mill to run at high RPMs.

The entire package is expertly laid out and is perfect for city and highway driving. As a result, the Venza also carries a preliminary manufacturer’s fuel efficiency average of 40 MPG.

The 2021 Toyota Venza includes ample room for five passengers. It is loaded with technology, including a 12.3-inch touchscreen display, a nine-speaker JBL audio system, And a seven-inch multi-information display. Also on board: Toyota’s new Star Gaze fixed panoramic glass roof, which is an electrochromic sunroof that allows drivers to switch from transparent to a frosted mode by the simple touch of a button. It’s a first for Toyota and gives the cabin an open, airy feeling.

The new 2021 Toyota Sienna Hybrid minivan is the second vehicle the brand showed off on their Monday reveal. In an effort to redefine the segment, the new Sienna has pushed the envelope to appeal to a wider array of lifestyles and needs. According to Toyota, the 2021 Toyota Sienna raises the bar for style, safety comfort, versatility and fuel efficiency.

For 2021, the fourth-generation Sienna is now exclusively powered through all trim levels by a gasoline-hybrid powertrain, composed of the Toyota Hybrid System II. The system is based on a highly-efficient 2.5-liter four-cylinder engine that is combined with two electric motors, both of which are designed to deliver plenty of low-end torque after idling in place.

The 2021 Toyota Sienna is the only vehicle in its segment that combines a hybrid powertrain with all-wheel-drive for on-demand performance. This AWD system uses two independent electric motors to power the rear wheels whenever additional traction is necessary. It is available on all trim levels for a very attractive price.

The beauty of both the Sienna and the Venza is there is no plug, no charging cord, nor the need to invest thousands of dollars for a built-in charger in your garage. Instead, through the Hybrid system, your vehicles will recharge your batteries automatically, while you drive.

At the very least, your new Toyota Sienna will entertain you with a six-speaker, 9-inch touch screen display. Order other trim levels and move up to a 12-speaker JBL Premium Audio system with Dynamic Navigation and speaker and Clari-Fi digital restoration technology.

Sit back in comfort in the Super Long Slide second-row captain chairs, which slide 25 inches with an available ottoman feature that lifts the legs after a long day on the soccer field or in the shopping mall. Have a drink from the on-board refrigerator (standard with Premium trim level) and if you spill, pick it up with the on-board vacuum cleaner.

If the Sienna were equipped with a couple of other features, you would probably never want to get out. To find out more about the exciting new Venza and Sienna Hybrids, contact the Napleton Toyota dealership near you.