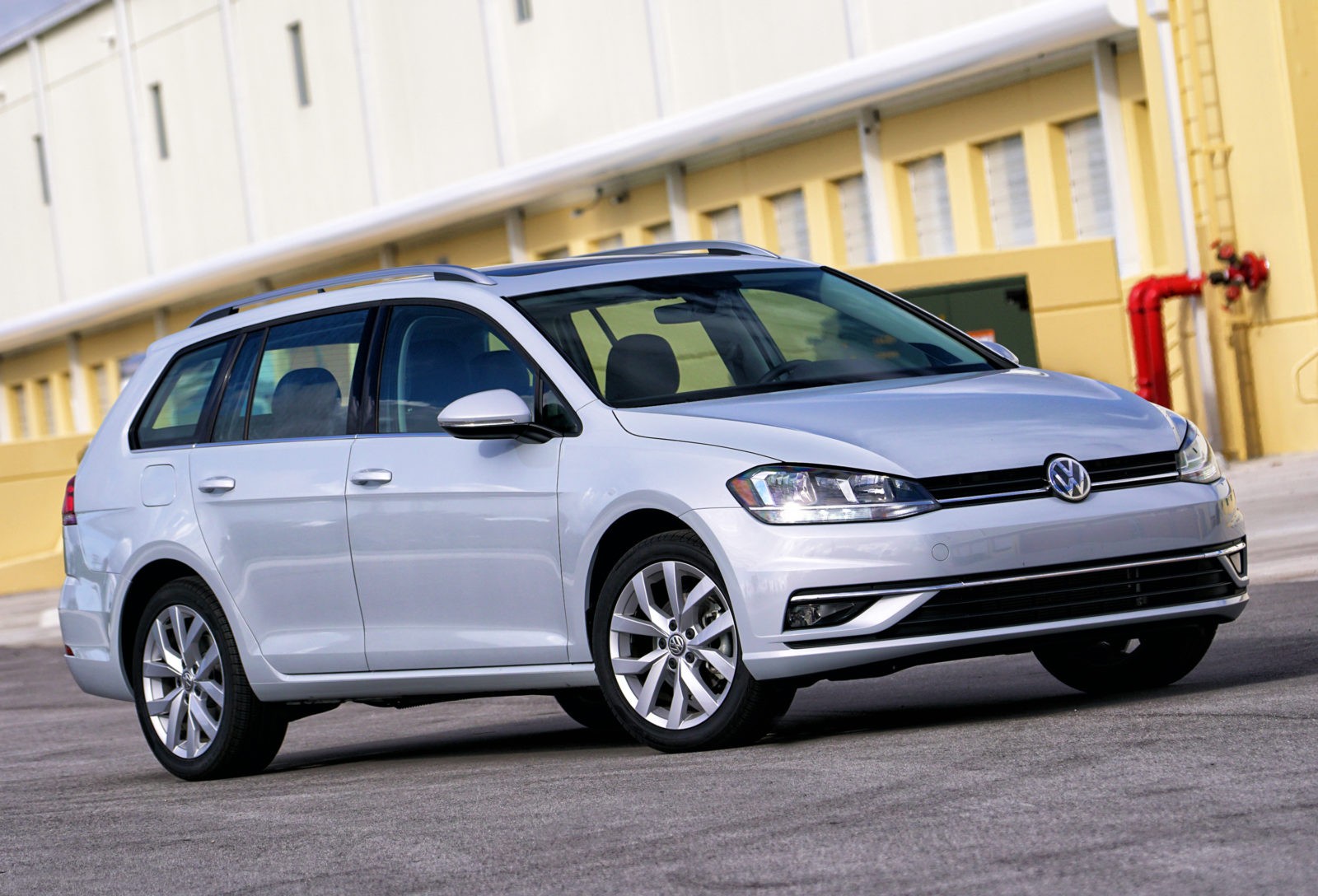 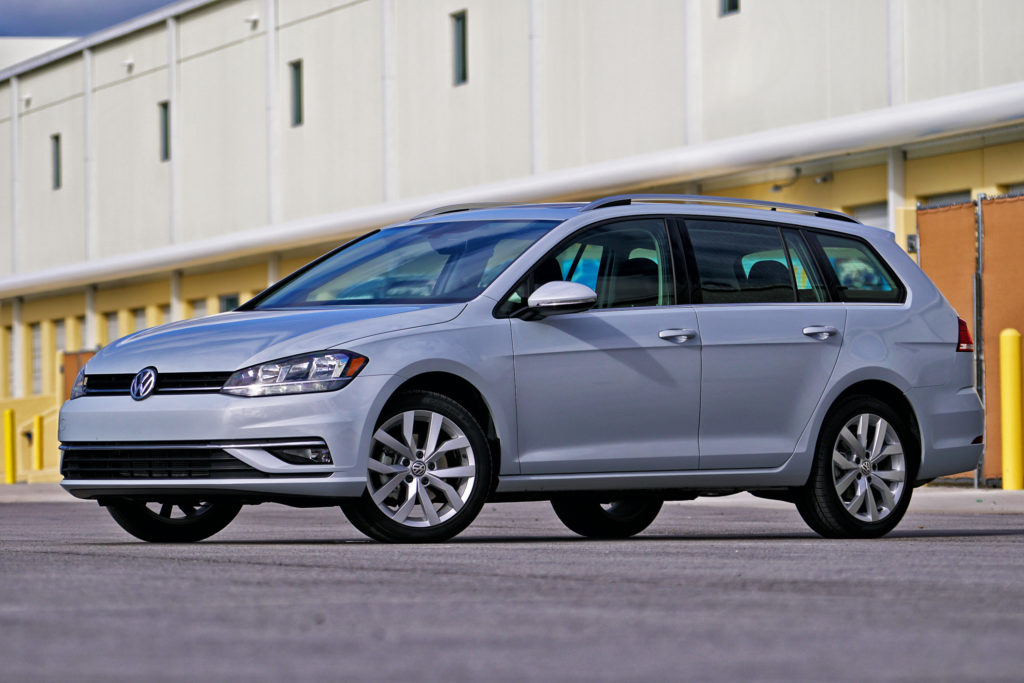 Imagine you have always loved the way a Volkswagen Golf has handled, its practicality, its cult status as the originator of the hot-hatch segment and so on. But what happens when you have moved on in life, with kids, a dog, or several of both. What then? The 2019 Volkswagen Golf Sportwagen is the answer.

Imagine pulling up in front of the big box supply store, and loading up on 64-roll packs of toilet paper or cases of water, or a pallet of tuna fish cans. You will be the envy of your neighbors as they watch you unload enough supplies to last for the next three years, dodging all disasters, whether natural or man-made. 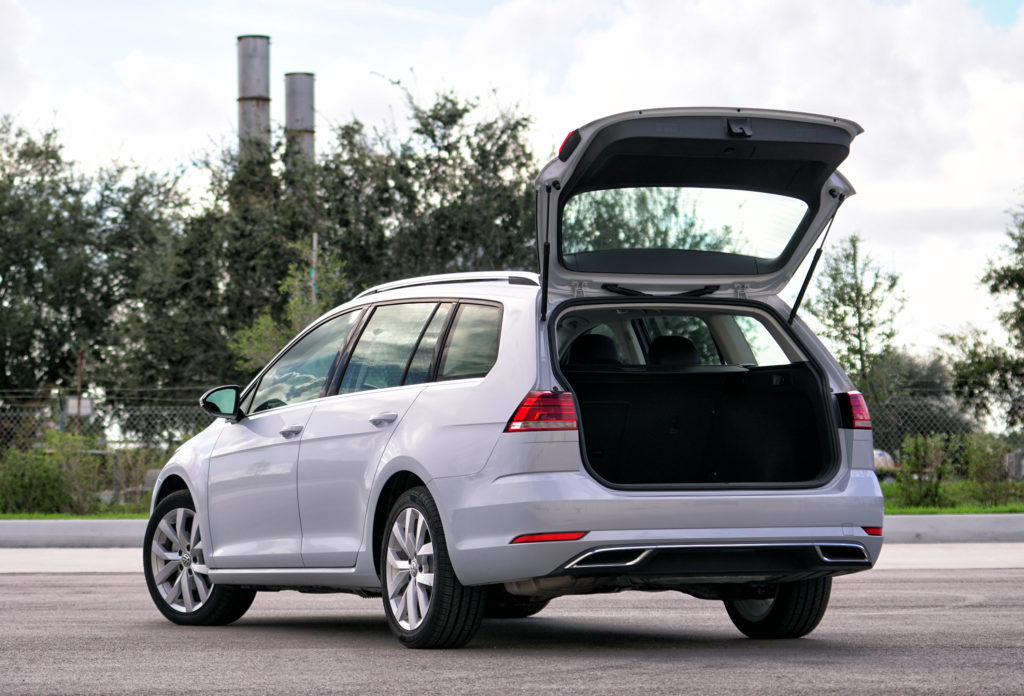 And best of all, after you unload all your supplies, you can still perform some enthusiastic corner cutting on the curvy road of your choice. Sure, as of late, wagons have fallen from grace, but at the end of the day, there’s nowhere else we’d rather be.

Just what is this Sportwagen we talk of? The 2019 Volkswagen Golf Sportwagen is a slightly stretched, cavernous version of the Volkswagen Golf four-door, this time with a much larger cargo hold, and the ability to wheel it with front- or all-wheel-drive. The Sportwagen is available standard with a new 1.4-liter Turbocharged inline four-cylinder engine. Being the cult classic our tester is, it was equipped with a 1.8-liter turbocharged direct-injected inline four-cylinder engine and a six-speed automatic transmission (a six-speed Manual is an available option) which is good for 170-horsepower. For those living in snow-belt states, check out the Sportwagen S 4Motion with all-wheel-drive. 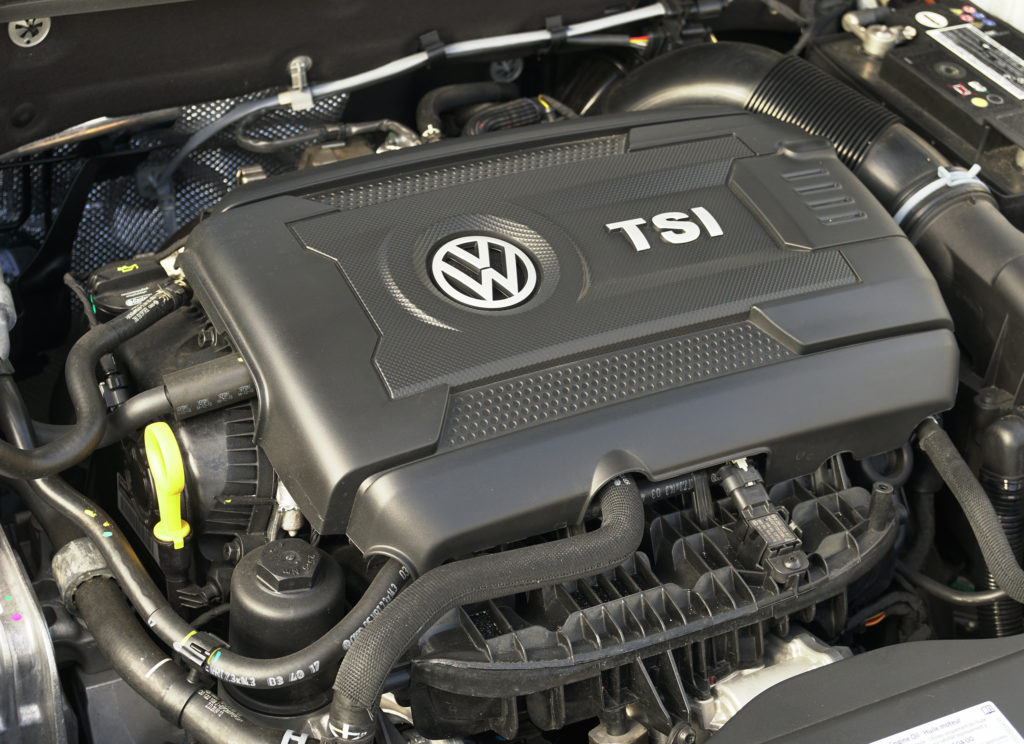 Other features on our Sportwagen include electro-mechanical power steering with variable assistance and a four-wheel independent suspension. Even though this version of the Volkswagen Golf is 12 inches longer than the standard five-door hatchback, it handles just the same as it more svelte, smaller brother. But good road manners is not all the Golf Sportwagen is about. It just happens to be loaded with technology, too.

Forward collision warning with autonomous emergency braking with pedestrian monitoring. Yes, that’s quite a mouthful. What it means though, is if it detects a pedestrian stepping off a curb ahead of you, it will automatically stop in its tracks. Remember, your mileage may vary, depending on speed, weather conditions and physics. There’s also blind spot monitoring, lane keeping assist, adaptive cruise control, rear cross traffic alert and the intelligent crash response system which turns on your emergency flashers, turns off your fuel pump and unlocks the doors for arriving first responders. 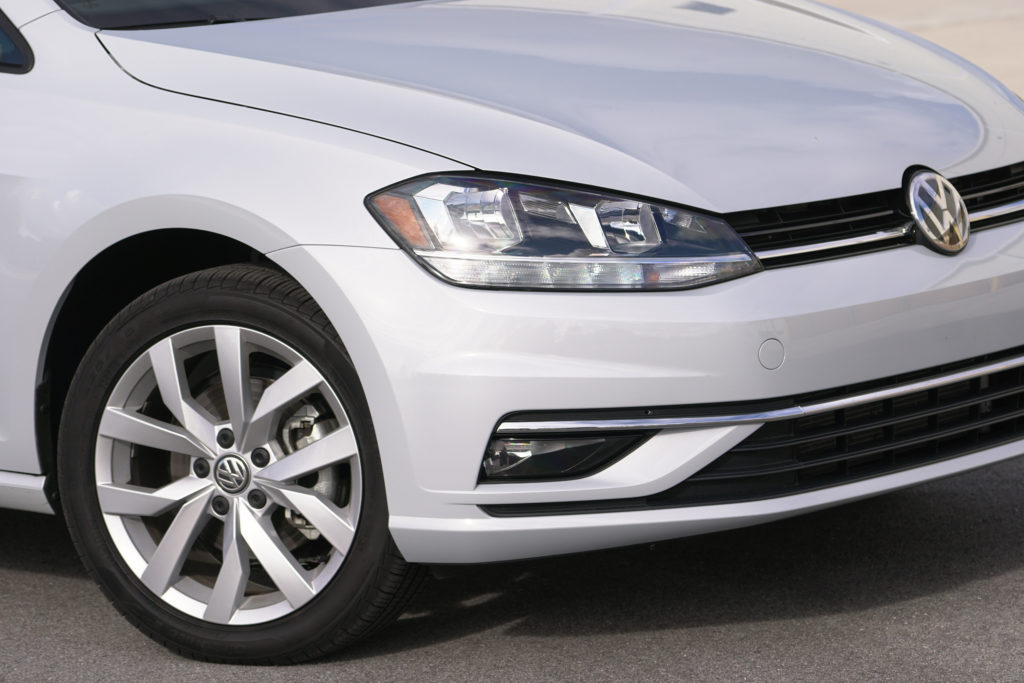 From the outside, our Volkswagen Golf Sportwagen SEL features a rather sedate “white silver metallic paint,” that covers a shape that to our eyes appears rather Scandinavian in tone. Follow that with trim that is either minimally chrome or black, and you have a Sportwagen which features no frills and is all business.

Inside, the Volkswagen Sportwagen (!) features a conservative V-Tex leatherette seating arrangement in otherwise comfortable surroundings. There’s ample room throughout for four six-foot passengers (or three medium-sized folks) in the back seat, but we wouldn’t recommend a long-distance jaunt across country in the back seat, for those over six feet. A huge panoramic sunroof adds to the airiness of the cabin which helps the otherwise black-on-black look of the interior. 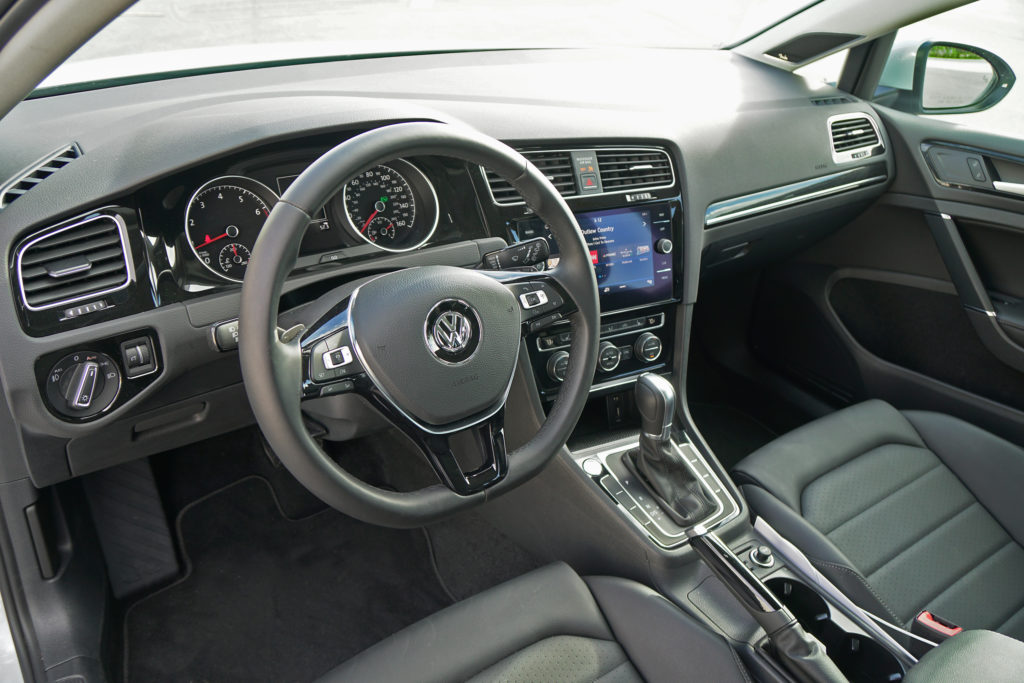 The Dashboard is strictly business with gauges it shares with other members of the Volkswagen family. A dual zone automatic climate control system makes things comfortable on both sides of the cabin, while the Volkswagen Car-Net infotainment system with Fender Premium Audio offers enough stellar dBs to satisfy even the most discerning audiophile. (If only they offered a Fender Stratocaster with every car they sold!) Navigation is part of our Sportwagen SEL but don’t forget that Apple CarPlay is here, too. That includes the use of WAZE on the eight-inch display screen, which allows you to check the road ahead. A cool proximity feature feels the presence of a human hand as it approaches the screen. It magnifies certain icons for easier control without taking your eyes off the road.

The extra cargo capacity of the VW Golf Sportwagen is one of the reasons you would select it over the standard model. Here, its capabilities can’t be ignored. Fold down the rear seat and you are able to stash up to 20 roll-a-board suitcases, which is great, but if you need to travel with that many, perhaps you have some other issues that need addressing first.

Behind the wheel of our Volkswagen Golf Sportwagen, we found a sportingly spry performing wagon, er, wagon that manages to behave like it was its smaller sibling, the standard Volkswagen Golf. As such, it is remarkably agile with the ability to cut corners with ease, almost as though it wasn’t hanging an extra 12 inches of metal out behind it. 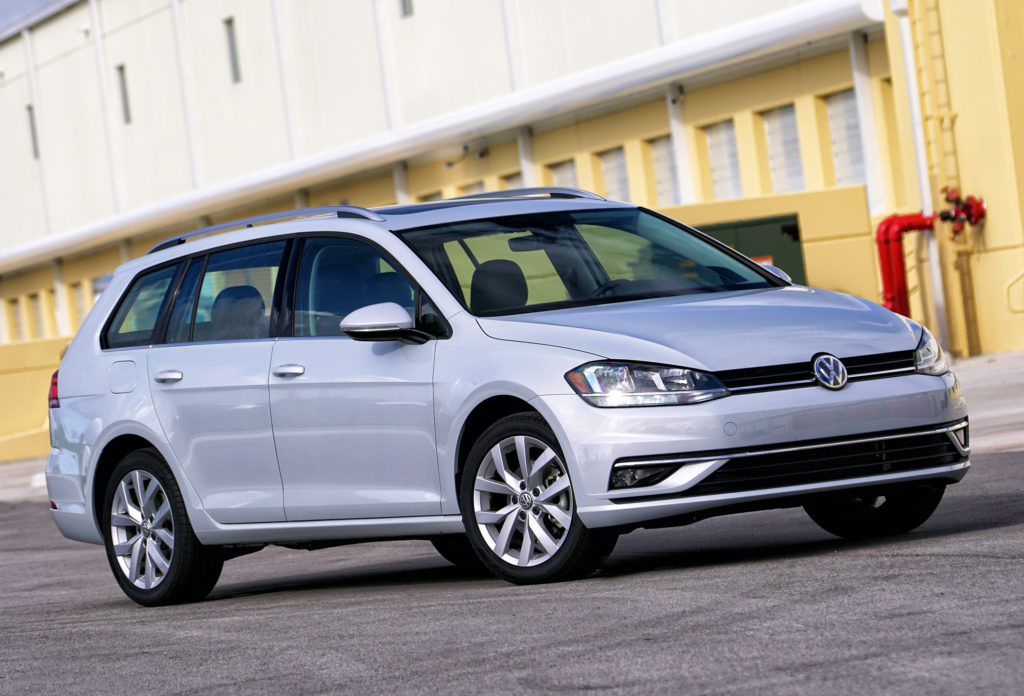 Acceleration from the 1.8-liter turbo was actually impressive in a furious and fast sort of way, with speed being relative, of course. To that end, we saw 0-60-mph come on in 7.0-seconds. Our front-driver managed to hit the apex of a turn with great road feel and turn it into an exercise of connecting the dots. All that with a load of mulch in the “way back,” and the ability to run as though it were a much more expensive car, like one from its Audi corporate cousin.

What more could you ask from such a car?