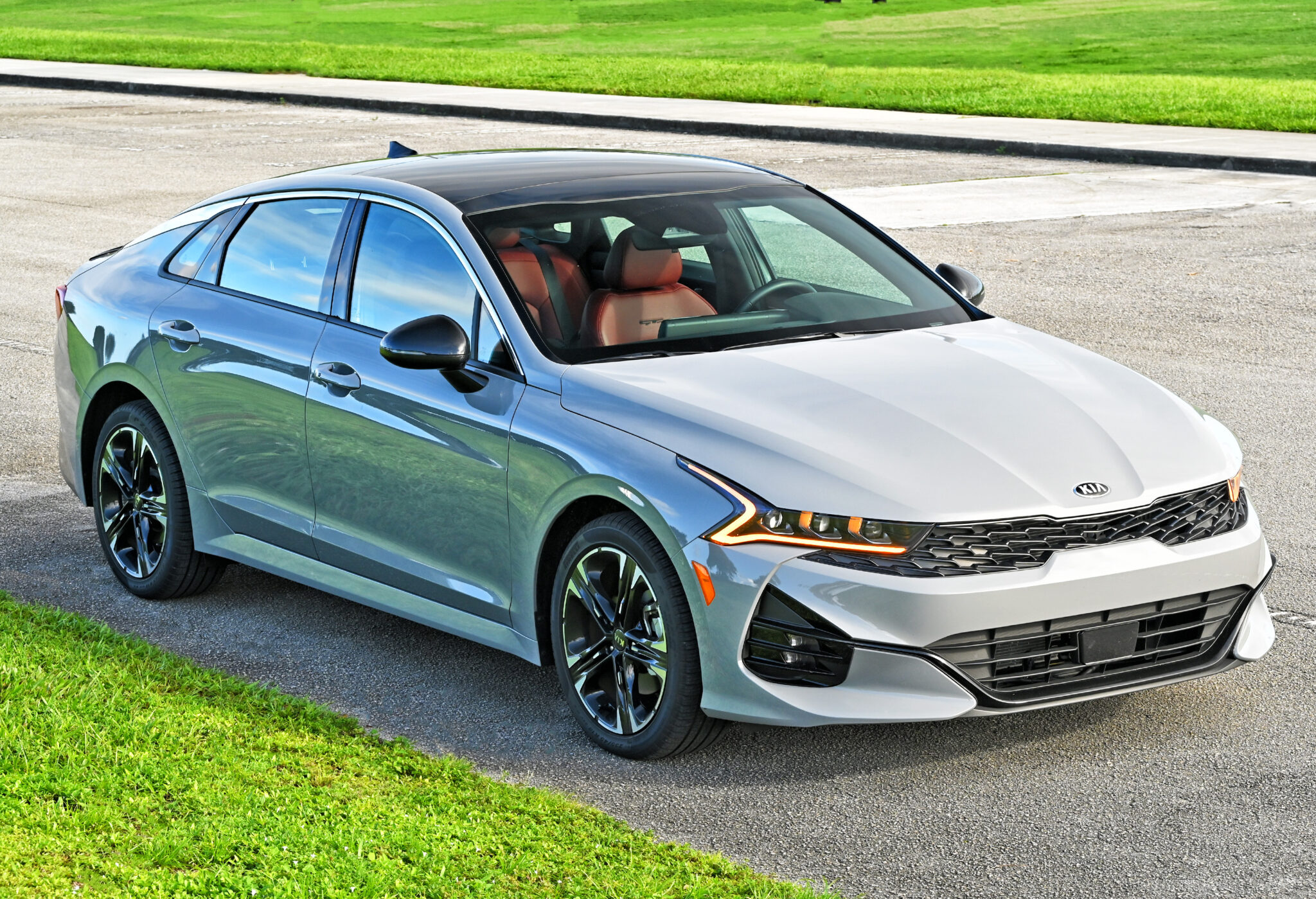 The new Kia K5 GT-Line is the successor to one of the most successful midsized sedans on the road today. Many knowledgeable readers will know we are talking about the Kia Optima. It’s the vehicle that put the brand on the map in the United States but, as with everything in life, all good things eventually come to an end.

Relax. The new Kia K5 GT-Line is the Kia Optima by a different name. The reason is simple: The Optima has been known as the K5 in the Korean market for more than ten years. Kia wanted to enact a global naming protocol where the vehicle would be known as the K5 on a worldwide basis. Like its Hyundai corporate cousin, the Sonata, the K5 rides on the Hyundai/Kia-conglomerate N3 Platform. It’s now two inches longer, an inch-wider, and 0.8 inches lower. The wheelbase has grown to 112.2 inches, mostly in the rear seat, making things a bunch more comfortable for the backseat driver set.

HOW DOES IT MOVE?

A new generation of turbocharged engines powers the Kia K5. If we didn’t know better, we would think these were Formula 1 engines. (Not really, but they run a similarly-sized engine block.) In the case of the base K5, motivation comes from a 1.6-liter turbocharged inline-4 cylinder engine. It manages to make 180 horsepower and 195 lb-ft of torque. It is the engine that powers the K5 LXS, GT-Line and EX models. It mates to an 8-speed automatic transmission.

There is an all-wheel-drive version of the K5 LXS that will cost owners an additional $2,100.

Using a modern version of the Kia Tiger Face grille, the new K5 picks up and carries on where the Optima left off. “Powerful and Angular” is the new design language here, and it is both. Featuring a new fastback look, it’s both sporty and inspired by the Kia Stinger flagship. Additionally, there’s just enough bling around the greenhouse to attract the attention of pedestrians and other onlookers.

The grille of the K5 features a mesh design that is inspired by shark skin. At the rear is a black applique that enhances the fastback roofline. The K5 rides on a buyer’s choice of 16-, 18- or 19-inch alloy wheels and features a shark fin radio antenna and dual exhaust pipes.

Well-defined, the interior of the new Kia K5 is an exercise in playfulness and utility at the same time. Our tester featured bright red leatherette sport seats with black trim and GT-Line embroidery on the seatbacks. The 10.25-inch infotainment display stretches across two-thirds of the dashboard, and offers everything in easy reach from the driver.

In the rear seat, tallish passengers have no problem getting comfortable. The panorama sunroof may cut into the headroom, but for most passengers, the rear seat is sized right.

BEHIND THE WHEEL OF THE KIA K5

When we heard that Kia was getting small as far as their engines were concerned, we too were a bit concerned. Color us old school here at Napleton.news, but we used to adhere to the train of thought that there is no replacement for displacement. That was until we had a chance to check out the 1.6-liter turbo inline-4 cylinder under the hood of the K5. This 180-horsepower mill, on paper, sounds rather meh, but when you load all the torque at the bottom end the way Kia has, it results in truly something special.

Grunt from the 1.6-liter four-cylinder comes quickly from the low end of the powerband, such as from a standing start. Thanks to a quick-shifting 8-speed gearbox, this engine pushes the ponies out in rapid fashion. What’s amazing is this engine can keep pace on the highway all day long and still manage, according to the EPA, to do it to the tune of nearly 40 miles per gallon. (Well, 38 mpg to be precise.)

Flick the drive mode selector switch on the center console for a quick firming up of the throttle and the steering at the same time. It’s the perfect thing to goose the engine along whenever a quick burst of energy was needed.

The new Kia K5 is the perfect step up from the outgoing Optima sedan. The Optima was a good start. The K5 is a great continuation. It’s available at Kia dealerships nationwide.